For the first time in decades I didn’t go to a City Ballet Nutcracker this past season. Not because I’ve fallen out of love with it—that could never happen—but because of the sluggish casting. Did I really need to see the same aging and eroding Sugar Plum Fairies whom I saw the year before, and the year before that, and the year before that? Or even the same still viable but set-in-stone performances that we know by heart? Yes, seasoned dancers are essential to every company, if only to show the way to their juniors, but youth must have its fling—before it’s too late. City Ballet is packed with young talent: how long does it have to wait? How long would Balanchine have waited before giving us the exceptional Mira Nadon’s Sugar Plum? Ten minutes, give or take a year. That’s how long it took him to give us Kent, Farrell, Kistler. Time will tell whether the new artistic director, Jonathan Stafford, has the confidence to take chances in a company that seems from the outside to be more and more dominated by its ballerinas—at times they appear to be running the show. His artistic judgment, on which so much depends, was seriously compromised last year when he invited the underwhelming Edwaard Liang to choreograph. Or was that the idea of his sort-of partner, Wendy Whelan?

The new season began with two all-Balanchine programs—always a good idea. The first was all-Stravinsky, another good idea, but undercut this time round by the opening ballet, the rarely performed Danses Concertantes, which was made in 1944 for the Ballets Russes de Monte Carlo, starring Danilova and featuring elaborate, vaguely commedia del’arte costumes and décor by the brilliant Eugene Berman. Danilova, we can be certain, was charming, witty, leggy, and so we assume was the ballet, but it never really took. When Balanchine re-choreographed it for the 1972 Stravinsky Festival, it was already looking dated—a jeu d’esprit that misfired. Which is just the way it seems today. Despite its many clever moments and its jaunty air, it simply isn’t likable. Nor, I owe it to the reality principle to point out, is Erica Pereira a Danilova.

SEE ALSO: Superb Dancing Makes Up for What Choreography Lacks at Alvin Ailey

By 1960, when Balanchine created Monumentum pro Gesualdo, and 1963, when he paired it with Movements for Piano and Orchestra, the era of his “modern” black-and-white ballets—The Four Temperaments, Agon—had been born, and the world was ready for the apparent simplicity and rigor of these two short works, always performed together. Monumentum is slow, deep, ravishing; Movements stark yet sprightly. The ballerina in both was Teresa Reichlen, whose great height and reach are so extraordinary that it’s hard to focus on her actual dancing. I find her predictable but impressive, and she carried these two special pieces with aplomb. Alas, as the years have gone by, the thrilling moment in Monumentum in which the ballerina is thrown daringly in a great arc from one man to another has been fatally diminished. When Suzanne Farrell or Gelsey Kirkland was airborne, your heart was in your mouth—not only because it looked so dangerous but because it was so beautiful. Today the woman doesn’t sail across space, she’s tamely handed over. No risks at New York City Ballet.

Stravinsky Violin Concerto was perhaps the greatest triumph of the Stravinsky Festival, universally hailed as a masterpiece. With time its impact has lessened—not just at City Ballet but wherever you see it (and it’s performed everywhere). Balanchine’s work hasn’t weakened, but today’s dancers are simply not as physically extraordinary as the originals. The original ballerina of the first duet, Karin von Aroldingen, had an extraordinary, almost contortionist body and an acrobat’s agility, her movement at times fierce, at times crab-like. Her partner, Jean-Pierre Bonnefous, was also almost feral at moments. Here was a confrontation of stunning and unnerving animals. The second couple were Peter Martins—towering, blond, leonine—and the far smaller, dark, and fragile-seeming Kay Mazzo. The amazing contrast only emphasized their individual splendor.

The look of these four stars, their specific physical attributes, was essential to how we responded to Balanchine’s brilliant use of them. Last week we had Sara Mearns and Adrian Danchig-Waring in the first duet—working hard but pallid compared to von Aroldingen and Bonnefous—and in the second duet Lauren Lovette and Joseph Gordon, who have similar dark looks and the same careful approach: no contrast, no depth. There was nothing wrong…it just wasn’t Stravinsky Violin Concerto.

The second program was well-conceived, beginning with that slam-bang virtuoso piece Allegro Brillante, which, Balanchine famously said, “contains everything I knew about the classical ballet—in thirteen minutes.” It was made for Maria Tallchief in 1956, and further confirmed her prima ballerina status at City Ballet. Later, Melissa Hayden made it her own, tearing through it in her most tempestuous manner—“Get out of my way!” Since then, almost every company ballerina has performed it, most recently Tiler Peck, whose eloquent non-tempestuous technique suits it perfectly. She was back in it last week after a long absence due to injury, still in charming command. Her longtime—and consistently superb—partner, Tyler Angle, was on hand, his technique conspicuously eroding but his tact, grace, and generosity as noble as ever.

La Source, which followed, is French, French, French—its ravishing music by Delibes, its style predicated on that of its original (French, of course) ballerina, Violette Verdy. Oddly constructed, very much on the same note throughout, it’s a gem—yet another example of how Balanchine was the master of every style. Megan Fairchild had a deserved success in it, but she lacks what Balanchine called the perfume. Or to put it another way, her perfume is American, not French. In the secondary ballerina role, the up and coming (we hope) Emma Von Enck made a excellent impression: she’s full of appealing zest and drive.

Finally, the return of Firebird, the company’s first hit back in 1949. This was the role that made Tallchief a great star, and she dazzled, thrilled, triumphed. It’s been in and out of the repertory ever since, refashioned (with the help of Jerome Robbins), refurbished, recast. Everyone is crazy about the Chagall scenery and costumes, everyone is carried away by Stravinsky’s great score. The ballet does everything but touch the heart. The Firebird herself is a creature rather than a woman trapped in bird drag. The Prince is generic. The evil wizard Kastchei (a role Balanchine himself danced in the Fokine version) is a cardboard villain. We’re in a richly accoutered fairy tale, not a “realistic” story.

Ashley Bouder was not a dazzling, thrilling, triumphant Firebird—she was a slightly worn ballerina who’s danced the role too many times. Her Prince was Andrew Veyette, making his debut in the role twenty years after joining the company. He looked handsome and virile, and that was sufficient: Balanchine’s Prince is more emblematic than dancey. The great success was Emilie Gerrity as the Bride—beautiful and touching. This was the first of the dozens of Firebirds I’ve seen in which the Bride stole the show! 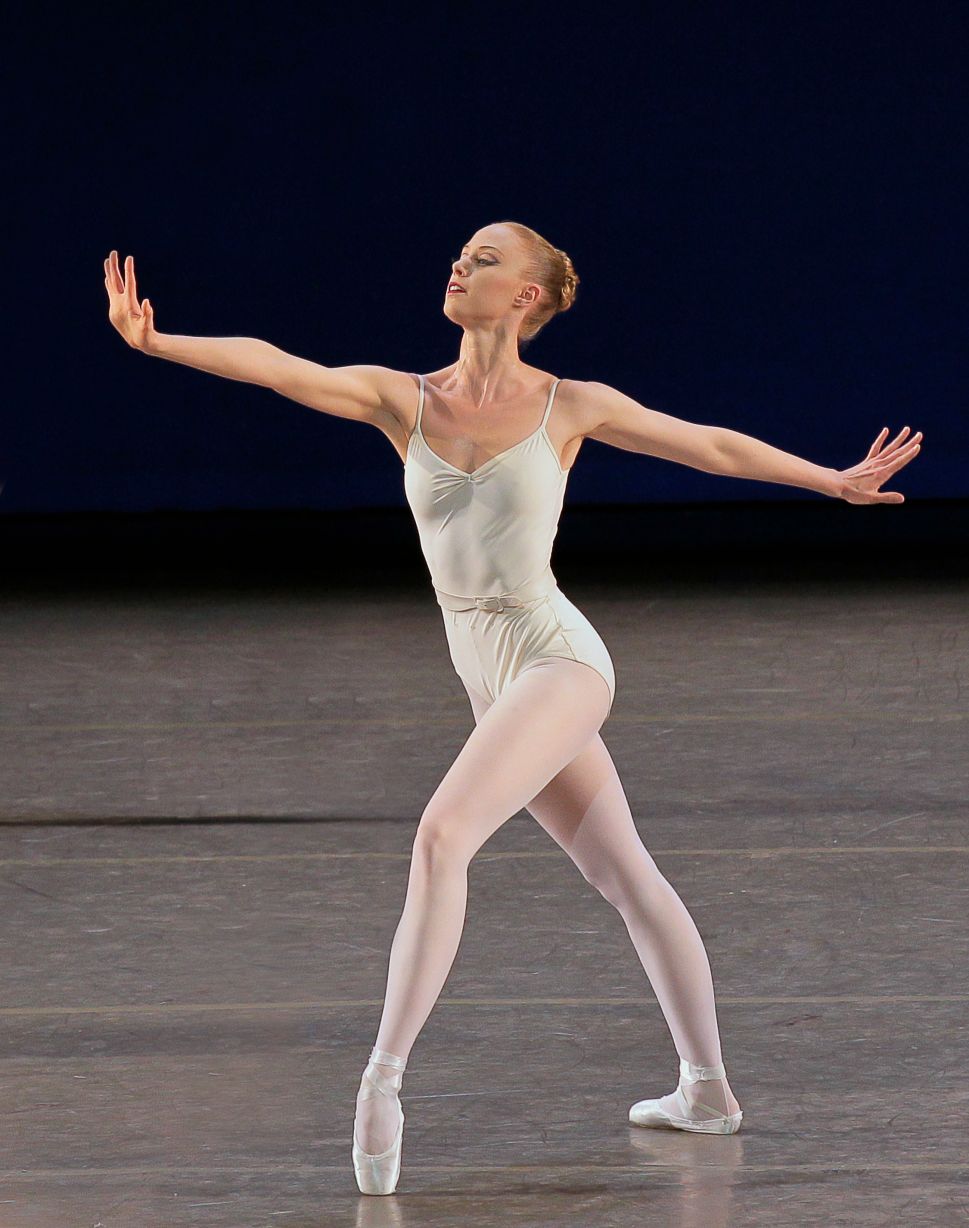