For those who have followed writer-director Richard Maxwell’s career for—good lord—20-plus years, it’s easy to forget what a huge shift his work has undergone. Yes, the acting style is the same as when he started in the Clinton Administration: extreme lack of affect. Performers stand center stage staring blankly as they deliver their text in flat tones. The arms hang, the feet remain planted, the eyes bore into the audience. This Zen-like, rigorous anti-acting has remained constant from Maxwell’s early breakthroughs such as House (1998) to a new trio of monologues called Queens Row, playing at the Kitchen through January 25.

What has changed, radically, is the language and approach to storytelling. The early plays were weird but basically accessible dramas about people on the edges of society: murderers, drunks, blue-collar boxers, security guards. Audiences laughed at the stiffness of the dialogue and the flattening of psychological nuance; Maxwell’s trademark minimalist deadpan, we assumed, was a satirical dehumanization of his subjects that revealed the absurdity of social or ethical norms. He was like Mamet, but cooler.

Somewhere along the way, it stopped being funny, and it stopped making sense. About a decade ago, Maxwell’s theater texts began to get distinctly surreal. His winding, expressionistic speeches seemed to spring from automatic writing or were gnomic explorations of inner states. Visually, the set and lighting designs got sparser and more abstract. The subject matter often seemed dystopian, bleak, alien. Now we’re at the point in Queens Row where there seems to be no set at all, language is like glitchy computer gibberish, and if you were to laugh at the actors’ monotonous delivery, you’d get the stink-eye from fellow audience members.

As far as I can make out, Queens Row is about an American class revolution that began in the titular (fictional) Massachusetts town, and radiated out to West. The fact that the actors are English (the work premiered in 2018 at London’s Institute of Contemporary Arts) is never explained. Three women enter and stand center stage, deliver a monologue, and leave. They stand on a circular divot of flooring that designer Sascha van Riel has cut and raised a few inches from the black stage top, like a dermatological excision or preparation for core samples. Twelve lights form a ring in the grid above the stage, the light slowly pulsing from brighter to dimmer as they talk. Between the second and last monologue, there are a few minutes during which the light-board operator seems to be randomly flicking lights on and off.

The first and most coherent speech is given by Nazira Hanna, a very grave, maternal woman who tells a grim history of riots “fueled by racism, xenophobia, foreign influence, class anger and a simmering paranoia, hysteria on all sides…[which] coalesced around general anti-government feelings and actions.” Society splits along class lines, and the woman’s son escapes to Odessa, Texas, where he meets a girl and lavishes her with gifts. The boy is senselessly murdered, and the woman is content to live with grief, in a kind of peace. She mentions the Qur’an as a source of solace and wisdom.

Who is the young woman (Antonia Summer) who comes next to speak? “I keep thinking about the time you took me shopping,” she recalls. “It was supposed to be for me, but I know it was for you. When we went to trashy places instead. Dollar General. Forever 21. Shopko. The clothes made me look cheap…Who was I to you? A cleaning woman with kids? A stripper with no place to go?” And we realize she is the Odessa woman with whom the first woman’s son had taken up. She talks of loneliness, how she misses her lover and how she got a tattoo that reads nos mori in unum—“We go down together” in Latin. If the first part was the cool description of a society breaking apart, this section is about the need for human connection in a chaotic world. A tragic love story.

In case you were following the action, the final section goes into full Jabberwocky mode. A thin, intense woman (Soraya Nabipour) makes strange hand gestures and babbles out a bizarrely decayed English to talk about her mother and father (the lovers from before?). Her speech is both babyish and like a failing AI experiment, all stutters and painfully mispronounced words, syllables stretching out into nonsense and pure sound. The script tells us this scene takes place in the New Mexico town of Las Cruces or, as the woman pronounces it, or “las cu  lahssss kroo sess.” She goes on to explain that “My fa -mouther myfamouther thought shed foowuund luv.” By the end, this child of the revolution has achieved, after effort, verbal coherence. “while we may have miss -ed those who had fallen before us from time to time,” she laboriously mouths, “we would not. honor them. or make them a nay different from you and me. An while we may struggle. from time to time. we would never say that we suffer.” It’s a beautiful, elegiac end that resembles closure, even if you’re not quite sure what the hell happened.

It all makes for a compellingly strange if difficult hour of theater that rewards deep focus, even as it frustrates the logical, narrative-hungry part of your brain. Maybe if Maxwell provided more connective tissue between Queens Row’s parts it would be more basically enjoyable, but then you’d lose the sense of myth and mystery that permeates every word and gesture. The actors have solid technique and natural charisma, and the meticulous design (van Riel’s ghostly lights, Kaye Voyce’s everyday but character-defining clothing) is crisply attractive. In the end, we’re in a bare, haunted space listening to ghost stories told by people who may not be alive themselves. In other words, a good working definition of theater. 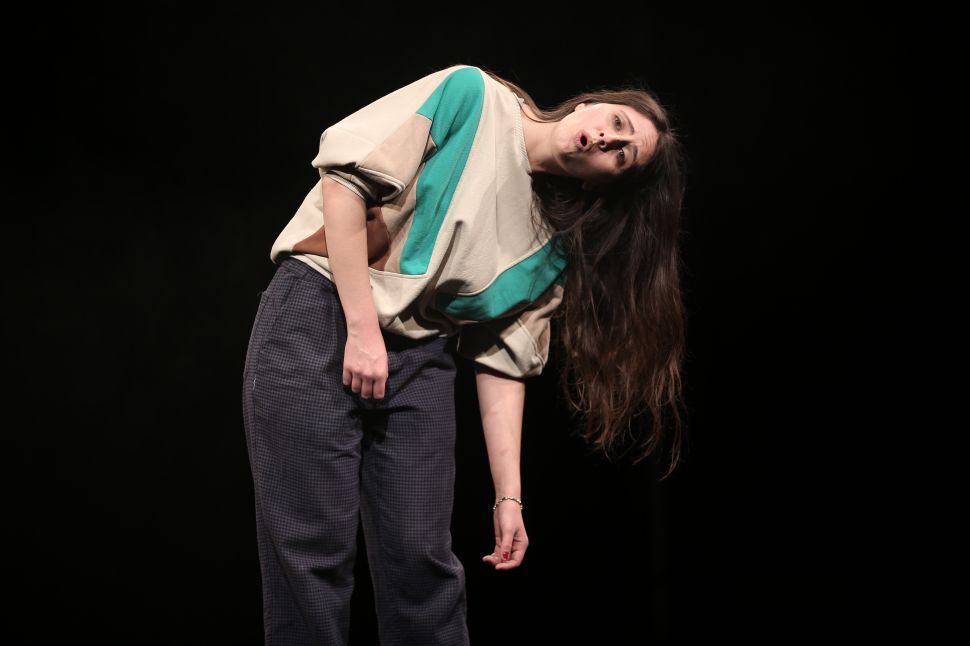