In the brick-lined basement of SculptureCenter in Long Island City, Queens, you’ll find Andrew Cannon’s Gertrude Fireplace, in simulated brick, a replica of a massive structure designed for Gertrude Vanderbilt’s studio in what is now the studio school in Greenwich Village. Affixed to the faux-bricks are white flame forms that ascend like tufts of smoke. Curator Kyle Dancewicz called the work a “representation” of the larger original fireplace, a construction that evokes the ghost stories and spiritualism of the early twentieth century, when it was made. Think of a poster for a horror film, in three dimensions.

That’s about as close as the works in SculptureCenter’s annual “In Practice” exhibition, on view through March 23, get to conventional sculpture in this year’s iteration, called “Total Disbelief,” and it isn’t close.

Which is fine with Christian Rattemeyer, formerly of MoMA’s drawings department, who took over as director in November.

SEE ALSO: Miró Thought His ‘Monster’ Sculptures Were His Most Unconventional Works

“The idea is to capture a commonality of conversation among the next generation of artists that allows us to get a glimpse at the questions that artists will be asking over the next five years,” he explains of the concept behind the regularly occurring exhibition that commissions work from emerging artists. “What are the materials they’re interested in? What are the vocabularies?” said Rattemeyer.

He asks visitors viewing the work of 13 artists and artist teams to “think of this as the absolute front line of art in three dimensions, the sharp tip of the spear as it moves forward in time.”

A spear is one of the few objects not included in the exhibition, but there are body parts said to be modeled after those of an artist and her family, formed and painted to seem sawed apart. E. L. G. Familial Archives by Emilie Louise Gossiaux conjures up the cartoonish later figurative work of Philip Guston and the contents of Jeffrey Dahmer’s freezer.  Laid out on a table, the display reconfigures the traditional family portrait.

Down the staircase, two videos in Process Entanglement Procedure by Jordan Strafer face each other. One on a large screen presents the story of a young woman assaulted by two old men. The other smaller screen distills that tale into a mound that could be described loosely as sculpted.

In that basement of arched corridors and small chambers, you feel that you aren’t in galleries, but in a cathedral’s crypt. (Never mind that the now-renovated building was built in 1905 as a trolley repair shop.) The size undermines a key ambition of sculptors today, which is scale, but it does remind you that these are works by youngish emerging artists, which have the feel of maquettes in those cramped spaces.

“The building is a component, and it’s part of the work itself,” said Kyle Dancewicz, director of exhibitions and programs at the SculptureCenter.

Domenech explained to visitors that the partitions, on wheels, had no fixed positions. Nor were there fixed places for dozens of chairs created by interlocking plywood boards, on which Domenech inscribed phrases from two poems by the Cuban writer Severo Sarduy (1937-1993), who worked in exile in Paris.

Born in Cuba, Domenech came to the U.S. when he was 20. Unlike his peers downstairs, he has ample space to explore sculpture as rudimentary movable architecture. Spiky shapes wrapped around lights suspended from the ceiling (which go up and down) look like night creatures from the visions of the Cuban painter Wifredo Lam.

“For me the idea of sculpture deals with possibilities,” Domenech said, “I believe that the last true sculptor was [Auguste] Rodin [1840-1917]. After Rodin, all artists who attempted to make sculpture, they looked at industry, because industry was producing far more interesting and complex forms and processes.”

That’s one artist’s reasoned view. Downstairs, scenes and figures from street life in the ensemble Blind Spot, by another artist, Hadi Fallahpisheh, celebrate the handmade gesture, complete with a dog created out of found materials. If sculpture is in a state of flux or uncertainty, satire in three dimensions is alive and well here.

The selection for “In Practice,” now in its 19th year, was made from some 800 applicants, Christian Rattemeyer noted. “Every iteration has less weight on its shoulders to get it right, and it’s more about making sure that we don’t play it safe.” 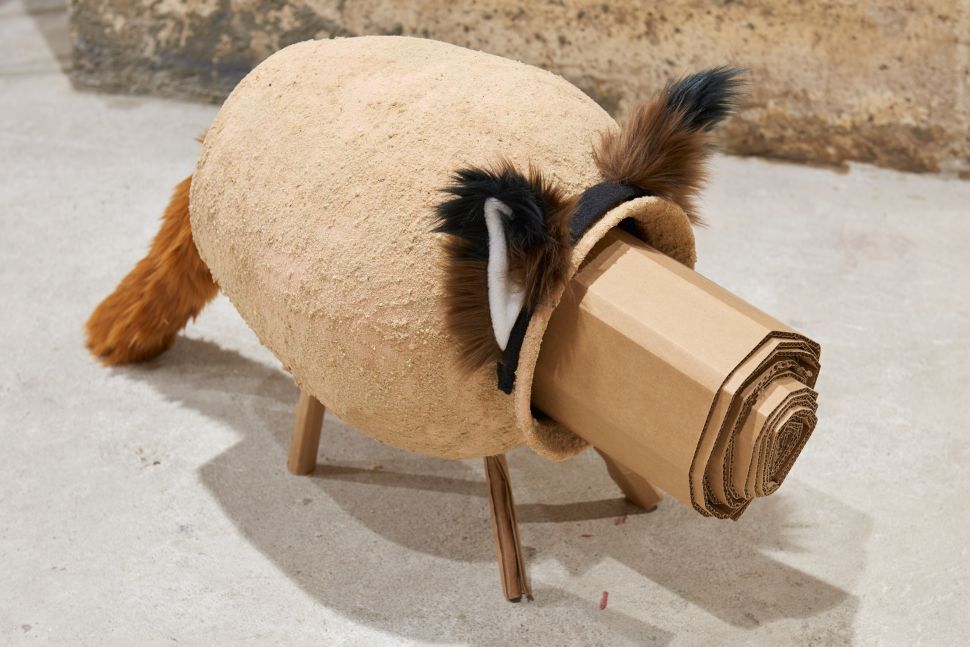