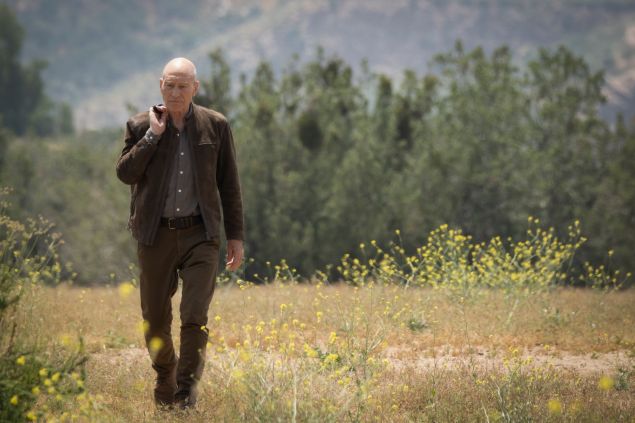 Up until now, classic Star Trek characters Data (Brent Spiner) and Bruce Maddox (Brian Brophy) have only appeared on screen together once: in Season 2, Episode 9 of The Next Generation called “The Measure of a Man.” The episode addressed whether Data, a complex android, was a sentient being capable of making his own choices. Maddox, a cybernetics expert with the Daystrom Institute, was more interested in disassembling Data in hopes of constructing others just like him.

Maddox saw Data as a machine to be mined for research—Starfleet property—rather than as a self-aware, feeling person. A judge determined the decision to disassemble was not down to Maddox, but Data himself. He refused, but still offered to help Maddox with his research, prompting the scientist to reconsider what sentience means.

The question of synthetics’ awareness, a familiar plot line in TNG, has again become a central theme in Star Trek: Picard, and Maddox’s role may hold the key to whether more sentients like Data can, or should, be created.

The debut episode, “Remembrance,” reacquainted us with the older, disillusioned Jean-Luc (Patrick Stewart), fairly happy to roam his vineyards with his dog Number 1, but wrestling with vivid dreams. The episode also introduced the synth Dahj (Isa Briones), a possible android offspring of Data, before she was killed by rogue Romulans. The two were brought together by a force that’s still unexplained.

Episode 2, “Maps and Legends,” opens in 2385, 14 years earlier, on Mars’ Utopia Planitia Shipyards. Synths are working alongside humans to create a rescue fleet to save Romulans from a threatening supernova.

Brent Spiner as Data, as he appears in Star Trek: Picard. CBS All Access

From the start, it’s clear that synths aren’t considered equal to humans, especially after crew members poke fun at one synth for not “getting” a joke. He retaliates by killing several crew members, then himself. That synth uprising and loss of life led to Picard’s resignation from Starfleet, his alienation from most of society, and the ban of all synths on Earth.

Fast-forward to soon after Dahj’s death. Picard and Laris (Orla Brady) re-enact the struggle in Dahj’s apartment and find Dahj had been getting “off-world” communications from her twin sister, Soji.

Armed with that fact, there’s only one option: Picard needs a ship.

This means crawling back to Starfleet, which has moved on without Picard, oblivious to his legacy. Despite his warning of possible Romulan attacks on earth, his request is denied. The rebuke puts him at a crossroads, but a place he craves and has missed in a big way: adventure.

Concerns about Picard’s health, raised by Dr. Benayoun (David Paymer), send a foreboding chill through “Maps and Legends.” But the news only spurs Picard forward, making him more determined to find Maddox and Soji—even if it means going off the cosmic grid to do it.

Like “Remembrance,” “Maps and Legends” contains a slew of mysteries, including a Tal Shiar myth that even Picard didn’t know about.

But the biggest knot to untangle may be whether he can repair his severed relationship with Starfleet. Picard originally joined the group for its mission: to “seek out new life.” Starfleet at one time was duty-bound to explore other worlds and keep them safe.

When Picard felt the organization wasn’t doing that, he resigned. But now, if Maddox has been creating synthetics—a kind of “new life” themselves—like Dahj, it raises questions that might complicate his arc in “The Measure of a Man.” The episode, which ended with Maddox calling Data “he” instead of “it,” is now regarded as one of the most memorable episodes in the Star Trek canon.

Data’s argument in that episode is worth remembering: “I am the culmination of one man’s dream,” Data told Maddox. “If, by your experiments, I am destroyed, something unique, something wonderful will be lost. I cannot permit that. I must protect his dream.”

Picard, who still feels guilt that his friend is gone, is compelled to find out why Maddox might be bringing synthetic dreams of his own to life, even if Starfleet no longer cares. For Data’s sake.