This review does not include spoilers for the plot of Star Trek: Picard.

UPDATE 1/31/20: CBS All Access has just made Picard‘s first episode available to stream for free on YouTube.

If this doesn’t sound like the hopeful captain we knew from Star Trek: The Next Generation, it’s because it isn’t. Picard picks up roughly 20 years after Stewart’s final appearance in Star Trek: Nemesis (2002). A lot has happened since then, and, despite the accepted wisdom of the adage, time cannot heal all wounds. Our once-stalwart Starfleet leader is still haunted by the death of close friends and the destruction of worlds that he has witnessed throughout his ascendance to the rank of admiral and eventual retirement. By referencing events from TNG, its various related films and J.J. Abrams’ 2009 parallel reboot Star Trek, Picard serves as a bridge between continuities and mediums and, more importantly, a welcomed revival of an iconic character.

Nostalgia fuels so much of the decision-making in entertainment today that a show like this one, full of familiar faces, could easily feel like a retread no one asked for or a return to the past that diminishes the original. Neither is the case here as Picard conducts itself with the soft-spoken dignity of its predecessor and the kinetic verve of modern serialized storytelling—at least in the first three episodes provided to critics.

Created by Alex Kurtzman and Michael Chabon, Picard delivers a rich new world that shares the classic Star Trek DNA, but is wholly unique from The Next Generation. The most immediate and refreshing difference is format—TNG embraced the plot-heavy, episodic structure of the 1980s and ’90s, while Picard is a more of an action-adjacent, serialized character study driven by our protagonist.

And much of what remained from the past still feels fresh. Even watching him in 2020, Picard comfortably slots in as an unshakably ethical man, albeit one at odds with his own identity and legacy. Separated from Starfleet for nearly 15 years in a bitter split, we find our former admiral in self-imposed exile at Chateau Picard in France. He’s spent years frustrated and enervated by the institution he built his life around, lamenting the past and refusing to engage with the present. “Starfleet gave in to intolerance and fear,” he decries at one point. There are shades of The Last Jedi‘s disillusioned Luke Skywalker present in Picard’s reintroduction and that makes for some compelling character drama.

Without delving into spoiler territory, we learn that Picard chose to take a moral stand on a divisive issue swirling around tensions between the Federation’s Starfleet and Romulus. While admirable, Jean-Luc’s tunnel vision has blinded him to the subsequent mistakes he has made over the last decade and a half, neglecting friends and burrowing deep within himself. He’s still the quietly calming humanitarian we knew. But he’s also fallible, prone to hubris and emotional outbursts. He’s an old man far closer to the end of his epic journey than the beginning. But when Dahj (Isa Briones), a mysterious young woman, seeks out his help, Picard must decide if he’s willing to allow himself to care again.

Picard hits full speed when its focusing on its lead character’s inner turmoil more than its far-reaching plot. The pilot alone introduces no less than six major mysteries, some of which remain nebulous three episodes into the 10-episode season. Between Federation conspiracies, secret death squads, clandestine operations, Romulan mythology, Borg artifacts, synthetic lifeforms and long-missing individuals apparently key to the story, Kurtzman and Chabon throw a lot at the wall at warp speed, and not everything sticks, at least not immediately.

Picard, a towering figure in pop culture, also has the unintended consequence of sucking up all of the oxygen in the room (there’s a space pun somewhere in there). His scene partners feel like mere archetypes as a result—the disgruntled former ally reluctantly re-joining, the hotshot pilot trying to escape past trauma, the shady bureaucrat, the idealistic scientist chasing a dream, etc. Hopefully, later episodes round out these supporting characters in more detail.

Still, it’s exciting to see everyone interact with a world freed from the broadcast standards of its forebears. Director Hanelle M. Culpepper exhibits a complete command of the show’s more explosive moments. There’s cursing and vaping in Star Trek now! The action, long considered a punchline, has real fluidity and danger to it here, even more so than its CBS All Access counterpart Star Trek: Discovery. Extras die in far more gut-wrenching fashion than your average dispatched Red Shirt. Worf, sorry to say, wouldn’t last five minutes. [Ed. note: I think we’ll just quote the Klingons on this one and say: “TarghlIj yab tIn law’ no’lI’ Hoch yabDu’ tIn puS!”]

Speaking of the old gang, Picard leverages the built-in audience love with a subtle touch that reminds you of the familiar without ever letting fan service detract from the mission at hand. (Small touches, like Picard’s very good dog being named Number One, go a long way.) As the season goes on, more cameos and fan service will undoubtedly arrive, but Picard quickly builds a foundation that stands on its own.

Ultimately, Picard isn’t so much about reclaiming youth—and meta commentary about revisiting the past—as it is about rediscovering the reasons and motivations to actively engage with the world around you. While Picard‘s far-reaching story ambitions may exceed even the capabilities of the U.S.S. Enterprise, Stewart holds it all together with the calm control of his on-screen counterpart. Rather than boldly go into the depths of space, Picard is far more interested in exploring the depths of its famous leader. In doing so, the series more than justifies its existence in today’s nostalgia-driven era. 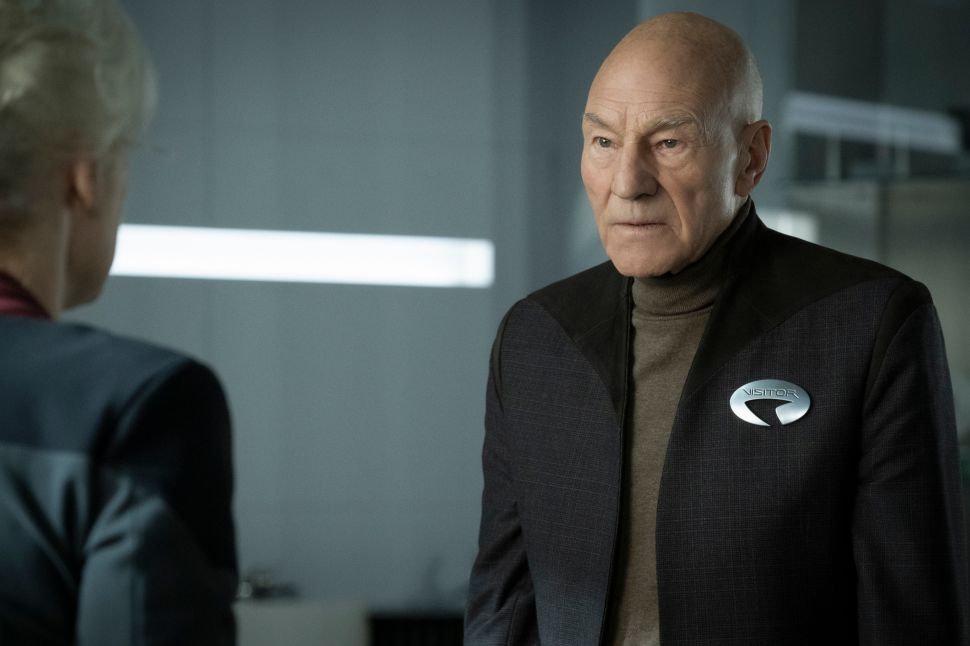