It’s Super Bowl Sunday. The TV is on, the drinks are flowing and the pizza is piping hot. You’re surrounded by excited fans swapping predictions, analyzing matchups, and comparing NFL jerseys. There’s just one problem: you have no idea what is going on.

Football has become America’s pastime, and even though not everyone is a fan, many of us have Super Bowl parties to attend. There we’ll have to navigate the complexities of Super Bowl LIV’s matchup between the San Francisco 49ers and the Kansas City Chiefs as best we can—from Jennifer Lopez and Shakira’s halftime performance to, of course, Super Bowl commercials. My editor Eric Vilas-Boas, who is most decidedly not a football fan, asked me, someone who manages multiple fantasy football teams per year, for a little guidance before the two teams square off in Miami Gardens’ Hard Rock Stadium.

Eric Vilas-Boas, Entertainment Editor: Brandon, my Yoda of Sport, I need help. I have been invited to a Super Bowl party this weekend, and I know nothing about football or the Super Bowl, apart from the tired Google meme “What time does the Super Bowl start?” Will you train me, Master, so that I don’t embarrass myself in front of politely rowdy company on Sunday?

Brandon Katz, Entertainment Reporter: Eric, as a sports fanatic who once wrote an extra credit essay in high school about why Adrian Peterson was a worthy No. 1 overall pick in fantasy football, I humbly accept you as my Super Bowl Padawan. (The Super Bowl starts at 6:30pm ET on FOX or FuboTV’s streaming platform, for the record.) Tell me, what are you most concerned about for Sunday?

Eric: Mainly, I don’t want to sound like a half-witted, scruffy-looking nerf herder! Master, who’s playing in the Super Bowl this year—and what are the biggest storylines I should know about going into the night?

Brandon: Calm yourself, apprentice. The Force is strong with you, I promise. All you need is a teacher. This year, the Kansas City Chiefs are squaring off against the San Francisco 49ers. The Chiefs have not played in a Super Bowl in a whopping 50 years, so their fanbase is desperate for glory. In that time, the 49ers have won five Super Bowl titles, tied for the second-most in the NFL. So what you’re seeing Sunday is a battle of history.

Eric: Not entirely unlike a certain pack of rebel scum trying to take out a powerful empire. I see. Who will decide that battle?

Brandon: Chiefs quarterback Patrick Mahomes is arguably the best player in all of football—a 24-year-old phenom capable of anything on the field. He won the MVP award in his first year as a starter! He’s basically the Anakin Skywalker of the NFL, but without all of the pent up emo rage and sand phobias. His coach, Andy Reid, is one of the winningest coaches in NFL history without a Super Bowl ring. A win this weekend could cement his Hall of Fame resume.

On the other sideline, the 49ers are led by their wunderkind coach Kyle Shanahan, son of Super Bowl-winning coach Mike Shanahan. He’s the Mad Scientist of the NFL with a wholly unique offensive mind. Consider him the Doc Brown of the Super Bowl. Behind a bruising defense and creative rushing attack, the 49ers will try to muscle their way to victory.

Eric: I see, I see. So those are the big names on either side. I’m going to a party that may or may not be full of folks I don’t know. Are there any land mines you’d advise I steer clear of? Any topics I should avoid around my host or fellow guests?

Brandon: Thinking ahead, Eric. You’re a born tactician. After six Super Bowl victories and eight appearances in the last 20 years, Tom Brady doesn’t need to be mentioned at all on Sunday. The only people who want to talk about Tom Brady at a Super Bowl in which he isn’t playing are New England Patriots fans. I don’t know how much experience you have with Pats fans, but they LOVE to remind you how good their future Hall of Fame quarterback is.

As a casual viewer without a rooting interest, chances are you’ll pick a team to support at the start of the game. Be sure not to transform into That Guy—the one who aggressively cheers and boos over the course of the night despite not knowing too much about football. Drink your drink, eat your food, and relax. No one likes a Try Hard.

Eric: Ah yes, Darth Brady. I’ve heard whispers, to be sure. Tell me, which team will you be supporting?

Brandon: As a long-suffering fan of Washington’s sub-par football franchise and someone who saw The Phantom Menace six times in theaters (I was 7, sue me), I intimately know the pain, disappointment and heartbreak of fandom. Though the 49ers have not won a Super Bowl since 1995, they last appeared in one just eight seasons ago. In generations past, the team transitioned smoothly from Hall of Fame quarterback Joe Montana to Hall of Fame quarterback Steve Young. Their fans have lived a privileged life whereas Chiefs supports have endured crushing blow after crushing blow. The path to becoming a Master is paved with empathy, my young Padawan, and, therefore, I shall be rooting for the Kansas City Chiefs so that their fanbase may once again rejoice after decades of disappointment.

Eric: Master, I have learned much from your teaching, as always. What do you see as the Chiefs’ biggest obstacle on their path to historic victory? Is there anything in particular we should expect from Shanahan’s offensive or defensive sides? Any disturbances in the Force that could turn the tide either way?

Brandon: If there is one element that would elicit an “I have a bad feeling about this” from Kansas City, it’s San Francisco’s devastating rushing attack. (That’s when the quarterback hands the ball off to the running back, Padawan. I must admit, I’m not looking forward to returning to our editor-writer dynamic when I must lose my condescending tone.) San Fran finished the regular season second in rushing yards-per-game (144.1) and has been absolutely slicing opponents in the post-season like Obi-Wan did to Darth Maul. Run defense is where the Chiefs are most vulnerable, so they’ll have to bottle up San Fran’s ground game if they have any hope of victory.

Eric: Thank you for sharing your time and wisdom, Master. Your tactical mind is helpful as ever. And I expect a 20,000-word handwritten analysis of Sam Elliott and Lil Nas X’s dancing in that Doritos Super Bowl ad on my desk Monday morning. But before that, do you have any parting advice for me as I prepare for this sports-related trial?

Brandon: Bring beer, a pizza, and don’t accidentally sit on the remote and change the channel. 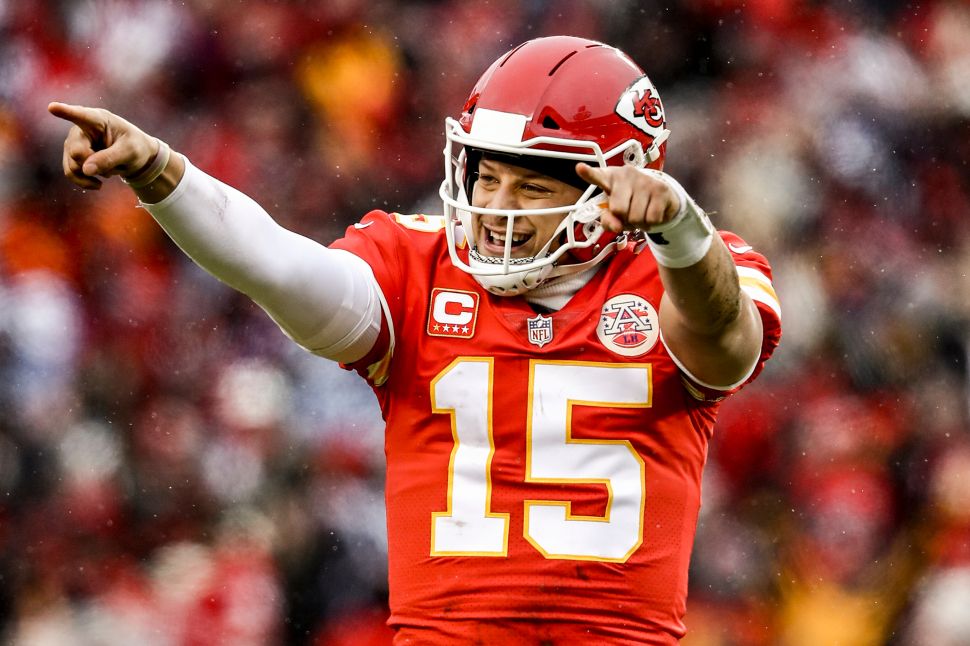