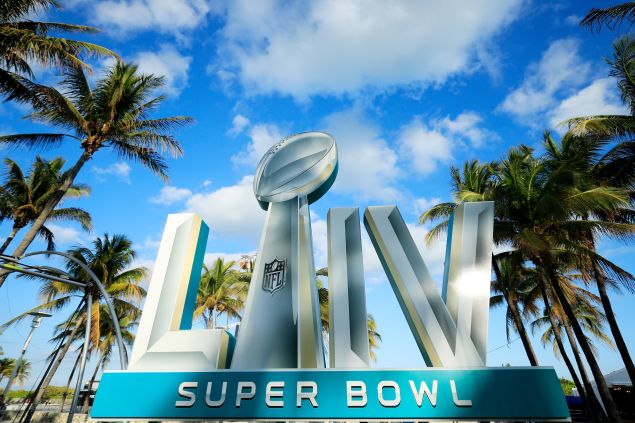 Sure, the big game is great. But how about that product placement? Cliff Hawkins/Getty Images

Super Bowl LIV between the Kansas City Chiefs and San Francisco 49ers is set to be an explosive night overflowing with thrilling ups and downs. The game should be okay too.

Despite declining ratings, Fox’s Super Bowl telecast will set a record by charging as much as $5.6 million for a single 30-second advertisement. The network had already sold out its primary ad inventory by November, the earliest sellout in a decade, per Deadline. In the age of fragmented viewing, even a smaller audience total for the Super Bowl is still the biggest communal viewing event of the year with overall viewership expected to hover around 100 million. As such, brands and companies are spending fortunes to get their products in front of all those eyeballs.

With so many Super Bowl spots already available, we decided to curate the five funniest and five stupidest ads (excluding film and TV trailers) for your viewing pleasure. Enjoy.

Boston accents are a staple of American pop culture. There’s a reason so many crime dramas like The Departed and The Town are set in the Massachusetts area. There’s also a reason making fun of Boston accents has become such a time-honored tradition, from Saturday Night Live to daily late-night television. Thankfully, Boston natives Chris Evans, Rachel Dratch and John Krasinski are in on the joke.

Having Lil Nas X, a talented artist who nonetheless has one hit song to his name at this early juncture in his career, defeat national treasure Sam Elliott in a dance battle is an affront to American ideals. Nobody tops that mustache. NOBODY.

We’re simple folk—we see Winona Ryder, we click. It’s that easy. This ad—about the Hollywood veteran actress making a website about Winona, Minnesota, via Squarespace—may not be for everyone. But we respect the full-on commitment Ryder and her scene-partner give to the silly bit. Cute, simple, effective.

Dashlane, which is also sponsoring the Deadspin team’s three-day blogging reunion tour, peeked into the soul of humanity and built an ad around the one thing we all have in common: an existential dread of forgotten passwords. Death on the River Styx is an apt metaphor for trying to hack back into your own account. Also, the production value here is top notch. Two for two, Dashlane.

Amazon, ‘What Did We Do Before Alexa?’

Ellen DeGeneres and Portia de Rossi ask a key question on behalf of Amazon: “What did we do before Alexa?” To answer that question, the tech giant takes us on a journey throughout history complete with court jesters, wagon pioneers and dragons. In the end, we’re reminded that self-reliance isn’t always the best practice when we’re so utterly ill-informed.

We, for one, humbly submit to our new robotic overlords.

You know, because things went so swimmingly the last time Rick and Morty teamed up with a food brand, right?

Maybe an extended version of this ad will play during the Super Bowl and prove so overwhelmingly good that humanity forgets about all the awful things Facebook does. For now, it’s absolutely crazy to recruit Chris Rock for your commercial and not have him say anything. Pass the mic.

Maisie Williams? Love her. Audi? Cool car brand. Environmentalism? Support it. This ad has all the ingredients needed to be a memorable and worthwhile Super Bowl commercial. But the Frozen ear worm song “Let It Go” doesn’t quite fit the message as well as Audi thinks it does.

Not even the delight of seeing Molly Ringwald on screen again can save this commercial from striking out. Avocados are great, millennials love them on their toast, and chips and guac is a staple of Super Bowl Sunday. But where is the funny in any of that?

Planters has really been pushing this whole “Mr. Peanut is dead” narrative for a week now. If he can die, what hope do the rest of us have? Next thing you know, the Kool-Aid Man will be convicted of breaking-and-entering, the Pillsbury Doughboy will melt and Chester Cheetah will be poached by The Burger King. Oh, the humanity!