Is the Super Bowl the biggest gambling event of the year, or is it baseball, basketball, soccer or even the election? Think it’s only about wagering on who will win and by how many points? I bet you’ll be surprised when you learn these wild facts about what you can bet on, and whether it’s the biggest deal of the year. At TopBet, can you wager on a wardrobe malfunction, Super Bowl commercials and the halftime songs?

1. Is the Super Bowl the Biggest Betting Event of the Year?

You’d think so, but the answer might surprise you.

SEE ALSO: The Super Bowl Worked With Artists to Get Miami Game-Day Ready

“FIFA World Cup is by far the biggest global event,” Bryan Sheridan, an account manager at TopBet, told Observer.” The Super Bowl is easily the biggest American ‘one off’ event, but March Madness—with the sheer volume of games—takes in more action (about 40% more) over a three-week period. Interestingly enough, the 2016 presidential election was one of the top 10 traded events last year, and we anticipate it being much bigger this year.”

2. How Do You Determine the Line?

In the press, you’ll see the stories which tell what the “line” is for the game, which indicates which team is favored to win and by how many points.

“It starts with a computer algorithm mixed in with some power ranking stats, such as defense-adjusted value over average (DVOA),” Sheridan explained. “Then, you adjust accordingly based on heavy one-sided action, injuries, weather and most importantly ‘sharp’ (betting expert) action.”

We’re always reading about “the Vegas line,” but how does it compare to online sports betting?

“The Vegas line is typically very close to that of online sportsbooks (one to two-point differences in some cases), but they tend not to stray off key numbers (3, 7, 10) versus 0.5 differentials,” Bryan noted.

3. Is It Better to Take the Odds-On Favorite or Risk Going With the Underdog?

Each year, you have this dilemma: Is it better to go with a safe bet, like the New England Patriots, who tend to be favored in the big game? Or is it smarter to take a chance on an underdog, like the New York Giants, in which case the likelihood of a big upset may not be as great, but the payoff could be worth it.

“‘More’ betting is generally determined by popularity of teams, time of game (Primetime!) or the game itself (i.e., the Super Bowl),” Sheridan explained.” The public generally likes betting a favorite (the New England Patriots) but also a popular public underdog (i.e., the Cowboys).”

This may be one of those years when there is no clear favorite. Looking at several Las Vegas sports bookies, I found six favoring the Kansas City Chiefs and another six selecting the San Francisco 49ers.  It’s hard to tell what will happen when the high-scoring offense of KC meets the smothering defense of SF. It may be closer than the 2020 election!

You might think the biggest shocker was the historic upset of the Baltimore Colts by the New York Jets back in Super Bowl III in 1969, with Joe Namath and Matt Snell shocking Don Shula and Johnny Unitas. Or maybe you bet it was the last time the Kansas City Chiefs won, back in 1970, when they defeated the Minnesota Vikings 23-7 in a game they were favored to lose by 13 points.

Would you believe online betting organizations were nearly crippled by a little two-point safety at the beginning of a Super Bowl six years ago, when the ball was snapped past Peyton Manning into the end zone?

Sheridan related the tale to me. “From a bookmakers’ perspective, easily the most memorable from recent games was 2014, Seattle vs. Denver. Our biggest ‘prop’ liabilities going into the game were (a) will there be a safety in the game (40-1) and (b) first scoring play of game: safety (50-1). From the very first snap of the game, the ball flies over Peyton Manning’s head into the end zone… safety! We were down huge, 15 seconds into the game. Seattle did end up winning easily in the end which more than made up for the early ‘stomach punch.'”

6. Can You Bet on Something Other Than the Winner and Score?

As a matter of fact, you can gamble on nearly ever facet of the Super Bowl, from the coin toss to whether the winner of that flip will defer until the second half. Here are the most bizarre factors you can bet on about the game at TopBet:

7. Can You Bet on the Commercials or Halftime Shows?

My wife likes watching the big game, but for her, it’s more about the Super Bowl commercials and the halftime show. Can folks bet on something like that?

“The general popularity of the game itself has grown immensely, but what’s really changed over the years is the volume of ‘props’ on the game,” Sheridan said. “TopBet will be offering over 500 different proposition wagers by Super Bowl kick-off.”

Here are some of the more interesting factors you can risk a bet on in Super Bowl LIV:

Regardless of the outcome, remember that it’s a game, and a piece of Americana. Be responsible whether it’s drinking, gambling or rooting for your team. 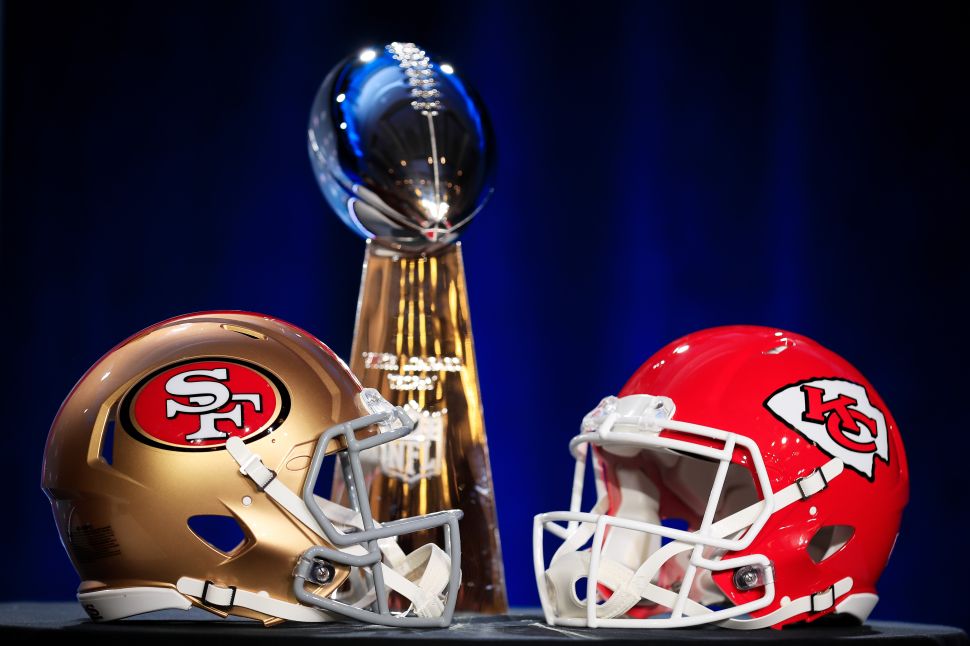