Artist T. J. Wilcox’s 2013 Whitney Museum exhibition, “In The Air,” memorably invited viewers into a panoramic, 360-degree screen, streaming views of the New York skyline captured from his former Union Square studio. “Now, instead, I am cracking my head open and allowing viewers to take a look inside,” says the artist about his upcoming exhibition, “Spectrum,” at Gladstone Gallery.

Stretching almost like a horizon across a darkened room, the namesake piece of this show is a rainbow of moving imagery, composed of six variously-colored films. Each hue, and the corresponding film, centers around a memory or iconic figure that has fascinated the 54-year-old artist throughout the years. The objects of his interest include people like artist and musician Yoko Ono, Vogue editor Diana Vreeland, and natural phenomena like the migration of Monarch butterflies. “I am fascinated by random moments that stay in our memories; it’s important to pay attention to why they never leave us,” Wilcox tells Observer from his studio, a Soho nook neatly occupied, like most video artists’ studios, by a large computer screen and numerous test prints on walls. “They are complicated or simple glimpses, but they may be puzzle pieces teasing meaning for something larger about our lives.”

SEE ALSO: How a Madison Square Park Monument Was Transformed to Honor Refugees of War

A video artist known for his unconventional methods of displaying moving images, Wilcox uses the feelings conveyed by certain colors and imagery to illustrate a self-portrait of his experience growing up up gay in the Northwest in the ‘70s, when he sought comfort in icons of the radio and screen. “I believe I’m probably the last generation that grew up with absolutely no evidence of any homosexuals in the world—as far as my environment was concerned, gay was only a derogatory slang, or maybe graffiti on a bathroom wall,” he remembers. “Information was absent, which made me a lifelong collector of others’ stories and [urged me to] look for evidence of my world in history.” Those others, for Wilcox, have been mostly legendary female stars and gay men, whose stories offer lessons about success, as well as failure, and prove the existence of possibilities outside of dictated norms of self-expression.

In many ways, Spectrum can be thought of as a tribute to gay myth-making. Each film flows with images in its own distinct rhythm and sequence. The colors bleed on their edges and bear alternate shades of reds or blues, similar to a painter’s palette.

Commencing the banner-like projection is the color red. It depicts Vreeland, with her signature black hairdo and flamboyant attire, luxuriating in her crimson-colored apartment, which she asked interior designer Billy Baldwin to mirror after a “garden in hell.” The transformation of red into orange yields the story of monarch butterflies, which Wilcox associates with resilience and elegance due to their yearly 8,000-mile migration from Central Mexico to Maine and back to unite with their mates and die. The following, yellow, is a love song to Yoko Ono, a current neighbor of Wilcox’s in the Upper West Side. Ono’s 1964 conceptual artist’s book, Grapefruit, about poetic and absurd aspects of the mundane, sets the color tone, visualized by archival imagery of a younger Ono and verbalized by Wilcox’s recent conversation with her.

Green is embodied in Green Carnation, a book penned by Oscar Wilde’s friend, Robert Hichens, who, unbeknownst to the couple, turned Wilde’s euphemism-filled dialogues with his lover, Bosie, into a book, which was later used against Wilde during his court case for homosexual acts. Here, Wilcox uses images of Wilde sourced online to depict him as a gay martyr, a dandy St. Sebastian, and symbol of intellectual homoeroticism. Blue celebrates the 19th century Italian ballerina Marie Taglioni, and purple concludes the spectrum with the original gay love story of Western civilization, that of Apollo and Hyacinth. According to the myth, their romance met its tragic end when a jealous Zephyr murdered the young Greek boy, resulting in Apollo’s creation of hyacinths to commemorate his bygone lover. The tale allows Wilcox to question the possibility of a happy ending in a gay narrative, which has been written throughout history with a tragic end.

From Michelangelo’s Pietà to Warhol’s Marilyn, mythologized stories and figures have been a constant source of inspiration for not only artists, but for anyone seeking escape from feelings of isolation. Easily they become beloved, a touchpoint we come back to consistently to make meaning of our highs and lows. “Like memories, certain shades of colors stay with us after the bigger picture dissolves,” Wilcox says. “Light is my medium, and I wanted to strip it to its basic elements…allowing me to discover those tones that have become parts of me.” 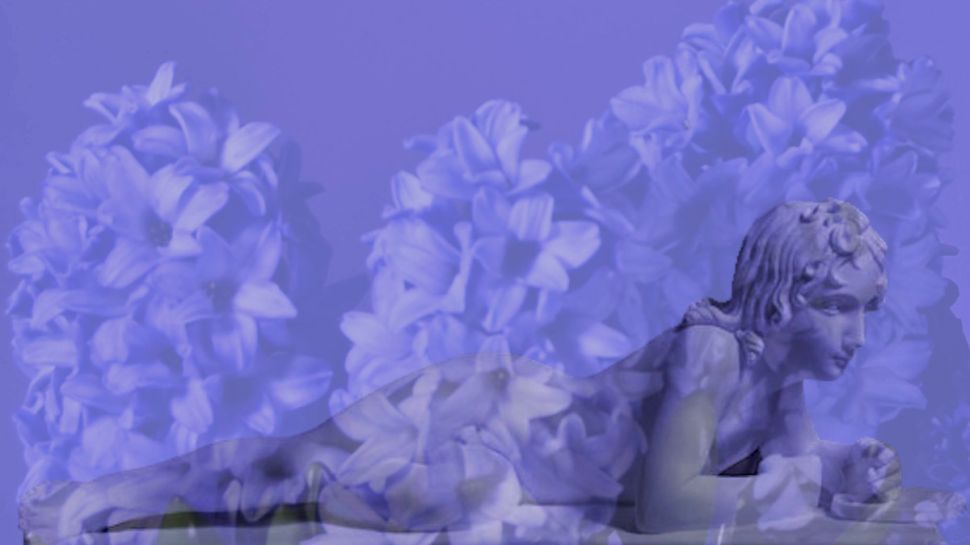