Charles Busch does wonders for a girdle.

For years, he’s been reducing audiences to tears with campy spoofs of old Hollywood movies wearing bosomy gowns and wobbly hairdos like a cross between Marlene Dietrich and Marjorie Main. His B-movie themes have included vampire lesbians, La-La Land during the Communist witch hunts and German heroines fleeing the Nazis on skis. For his newest opus, an off-Broadway hoot staged at Cherry Lane Theatre called The Confession of Lily Dare, his inspiration is the corny but popular soap operas of the 1930s, in which beautiful women bravely faced the challenges of the Depression to carve a niche of happiness for themselves and their children against impossible odds. Mr. Busch plays not one of them, but all of them put together—a source of both joy and frustration. It’s not his rapid changes in plots and histrionic impersonations that are problematic, but the fact that there are so many of them. Never mind. Laughs are abundant and a good time is guaranteed.

The first time he appears onstage as Lily, an orphan whose mother has been killed in an avalanche and is dressed like Leslie Caron in Gigi, she has traveled all the way to San Francisco from a convent in the Alps to live with her only living relative—Aunt Rosalie Mackintosh, a rough, tough madam who runs the most notorious bordello on the Barbary Coast and conjures memories of every actress  in pre-Code period pieces from Ann Dvorak to Ruth Chatterton and Gladys George. Before you can say Frisco Jenny, innocence is shattered and Lily is befriended by a young prostitute named Emmy Lou; the gay house pianist, Mickey; and the cathouse bookkeeper, Louis. Louis gets her pregnant and dies in the 1906 earthquake memorably shown in the film San Francisco (the play moves fast), leaving her with an illegitimate daughter named Louise to raise with the help of a notorious gangster, Blackie, who sells Louise to a wealthy family on Nob Hill. Heartbroken, Lily falls on hard times in a black, airless tenement in Chinatown while the audience screams with laughter at lines like, “We’re down in Chinatown—rats and cockroaches dance a gavotte in our shoes.”

Blackie (suave Howard McGillin) re-emerges in time to turn Lily into a cabaret queen named Mandalay, providing Mr. Busch with the chance to sing a Brechtian  Kurt Weill torch song, “Pirate Joe,” gleefully in the style of Marlene Dietrich imitating Lotte Lenya. A star at last, it is time for Mandalay to make herself known to her daughter Louise, who has narrowly escaped an orphan asylum and is now on her way to a dazzling career as a coloratura soprano whose signature aria is an off-key “Sempre libera” from La Traviata. But Mandalay’s besotted new admirer, an Austrian aristocrat named Baron Kinsky von Esterhazy-Trauttmansdorff-Cavriana-Graetz (a.k.a. “Zouzou”), who believes her to have been “born in the streets of Sumatra, weaned by a King Cobra, and raised by circus folk in Constantinople,” turns out to be a cop in disguise. In handcuffs, Mandalay spends the next five years in jail taking the rap for a diamond robbery committed by the master villain Blackie. When she gets out, Lily is drab, dowdy and drained, but not too much to become the reigning madam of San Francisco’s next bonanza brothel replete with crystal chandeliers. (The wonderfully evocative sets by B.T. Whitehill are mostly purple, natch.) Under her new name, Treasure Jones, she hits pay dirt again while Baby Louise is still trying to sing Puccini in tune. (“I’ve read everything in the historic records—in the original French—about the real-life Lady of the Camellias… and researched the preponderance of lung disease among the Parisian demimonde,” she explains. Her marriage to an Italian aristocrat cannot be attended by a common madam, so Lily remains in the shadows like Barbara Stanwyck in Stella Dallas.

There’s more, with murder, mayhem, smoking guns and a reunion on death row in San Quentin like Constance Bennett in the end of Madame X, but why go on? With so many plots in so many time frames, I got dizzy just trying to figure what was going on. Structurally, The Confession of Lily Dare is a rambling mess, which serves Mr. Busch’s style perfectly. The shifts in tone and narrative are essential to the many subplots, all related by life-long friends Emmy Lou and Mickey from Lily’s gravesite in 1950. It’s so hysterically contrived the cast seems to be inventing the dialogue from scene to scene, and playing it with hilarious exaggeration. It feels like a cast of thousands, but Mr. Busch is supported by only five actors playing multiple roles. They are all superb, and frequent Busch collaborator Carl Andress directs them all with the kind of preposterous panache usually reserved for commedia dell’arte.

One of the things I most admire about Charles Busch is his love of language, playing around with words with side-splitting results, no matter how nonsensical. Who else could dream up a line like, “From the first, I perceived a soupcon of mystery behind your school girl  insouciance”? Just surrender perception and have yourself a ball. 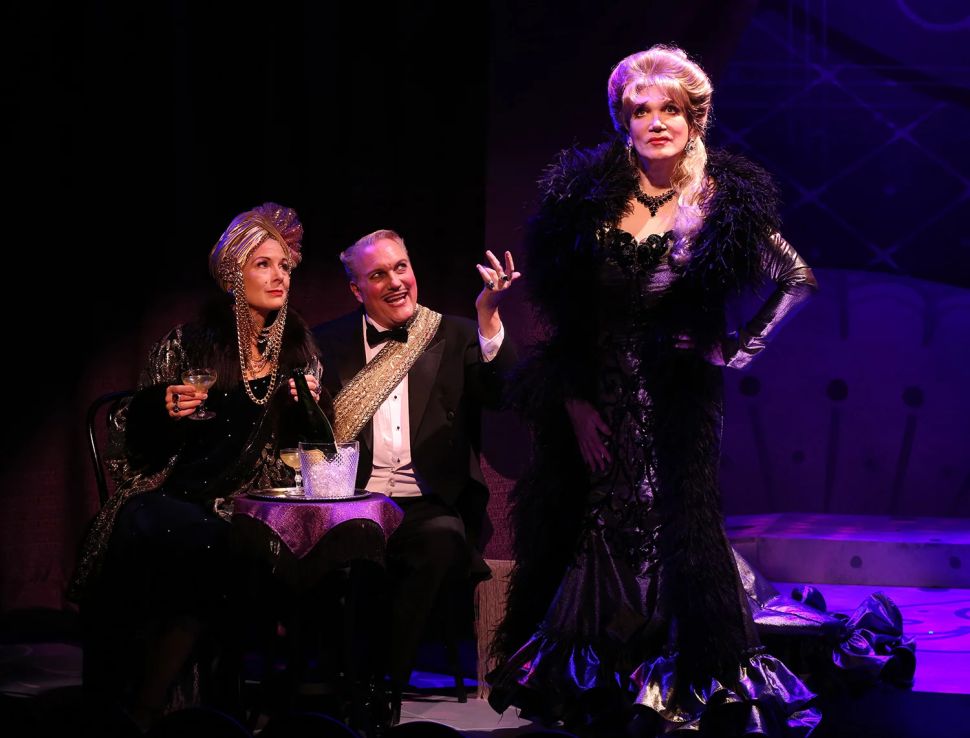