Even in the barren wastes of January, it’s a special challenge to sit through a movie as vile, misguided and trashy as The Gentlemen, but it comes as no surprise to me for one obvious reason: it was written with empty-headed desperation and directed with minimal imagination by Guy Ritchie, one of the most incompetent filmmakers of the century. Even if it made one iota of sense, you know you’re in trouble when you’re watching a movie filmed in England and filled with unfamiliar accents in which the American star is the most incomprehensible person on the screen. But this is Matthew McConaughey. What do you want for a nickel?

SEE ALSO: ‘The Turning’ Is the Horror Movie Equivalent of Processed Cheese Sauce

From the opening scene, when a man who orders a pint in a pub is slaughtered and his glass of beer fills with blood, the labored subplots twist like pretzels while a ruthless tabloid reporter (Hugh Grant) pitches a movie about an American expat named Mickey Pearson (McConaughey), who becomes the richest and most powerful drug lord in the U.K. His kingdom includes a dozen strategically hidden country estates where his gang uses the latest technology to grow and market a lethal drug called “white widow super cheese.” The queen of this criminal empire worth 400 million pounds is Mickey’s wife—a Cockney Cleopatra named Roz (Michelle Dockery, in a downward spiral from her Lady Mary role on Downton Abbey). Cross Roz and you can establish squatter’s rights on the bottom of the Thames.

The Gentlemen features no gentlemen, but when Mickey decides to retire from crime, go where green things grow and find some peace before the end, the army of depraved thugs and murderers who show up to bid on his empire allow Guy Ritchie to pull out the stops and pack the screen with his typical traffic jam of trademark clichés: filthy dialogue that cannot be repeated in any publication that still considers itself respectable, unspeakable violence, despicable characters, death by guns, poison, arson fires, kidnapping, heroin overdoses and liberal doses of anti-Semitism, homophobia, racism and sexual abuse. Every attempt to display a distinct lack of fluid lyricism is honored in multiple snafus, disconnected scenes and twists that backfire. The film makes so little sense that every set-up leads to either a giggle or a guffaw—not because it’s clever and amusing, but because it’s so pointless and stupid. Add junkie rock stars, Russian oligarchs, victims frozen to death in meat lockers, feuding Chinese drug gangs, projectile vomiting and carnivorous pigs, and by the time this numbing ordeal drags to a welcome finale, its creative bankruptcy has reached the point where the marquees and fences resort to advertising Guy Ritchie’s old movies.

Like everything else in the Guy Ritchie oeuvre, The Gentlemen exudes all the appeal of pork tartare. 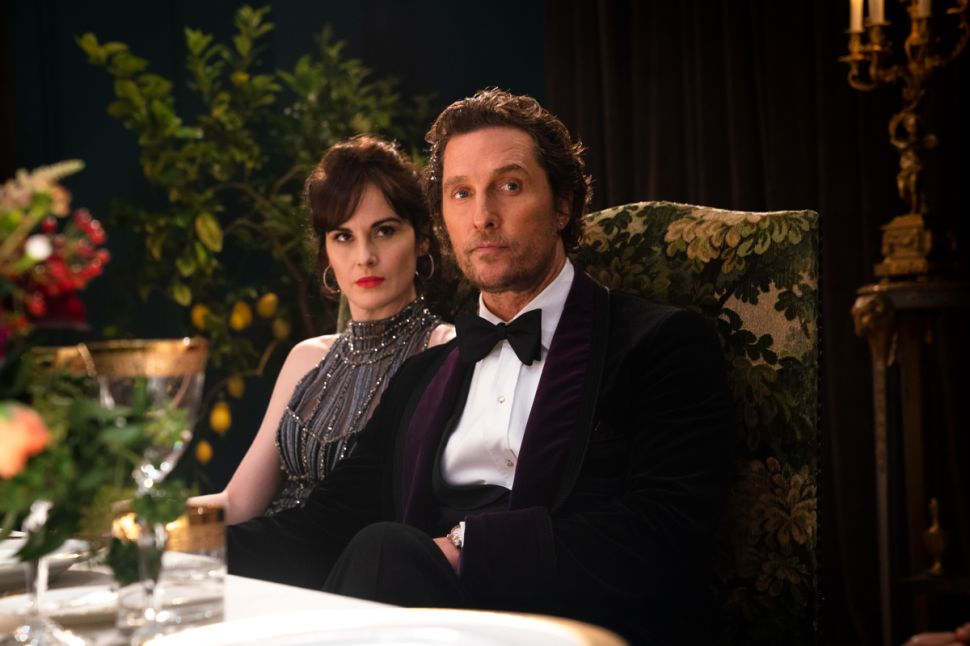