You probably know a Finley. She’s texting you that she’s 10 minutes away when she hasn’t left the bed. She’s coming to your house straight from a night out in a rumpled blazer with a harrowing story, one she’ll shout over her shoulder in half-sentences while digging through your fridge. She’s kicking her leg over yours and asking if she can borrow a change of clothes, she’ll bring them back, and she won’t, and it won’t matter because it’s Finley and she’ll probably build you a bench or something in six months to make it up to you.

Even those of us who had never known a Finley have become intimately acquainted with her in the last few months watching the character of Sarah Finley, played by Jacqueline Toboni, on The L Word: Generation Q, the reboot of the mid-to-late-aughts lesbian soap opera The L Word. The original series garnered a devoted fanbase despite many missteps in portraying a community of lesbian and queer women: Its characters mostly floated around Los Angeles in a state of blissfully unexamined whiteness and wealth; it drew on racist stereotypes of black women; bisexuality was often treated as a design flaw; and not enough can possibly be written about the show’s transphobia. This time around, Generation Q was characterized by a significant and visible effort to course-correct while bringing back some of the show’s original characters, in order to depict queer communities in a more realistic way—and with a cast whose identities as people of color or trans people are part of a complex storyline rather than the entire story itself.

Enter Finley: a tomboy soft butch, a heartbreaker, a bit of a mess. In her recap of the show’s premiere, Autostraddle editor-in-chief Riese Bernard wrote, “I feel like I know a lot of Finleys, you know? Like that friend who just really wants the best for you and gets more excited about your life than you’ll ever be while maintaining only the most chaotic grip on their own. They’ve been through it — but you’d never know, looking at that smile.” That smile finally broke, though, in Sunday’s season finale, “Lapse in Judgement,” as Finley’s best efforts to duck self-awareness and self-understanding disintegrated, capping a plot line unlike anything else in queer film and television right now.

Finley, who landed in Los Angeles after being kicked out of her Catholic family’s home, doesn’t fit any easy narrative tropes: She’s a heavy drinker, but not one whose addiction has been well-explored by the show (which, writer Britni de la Cretaz pointed out for Bitch, seems like a missed opportunity); she’s estranged from her family, but still sometimes talks to her dad; she’s gorgeously androgynous in a show mostly known for its femme-centric cast; any one of these could be character-defining qualities, but instead, a less-visible sense of shame and panic are at the heart of her story.

Self-evasion is Finley’s defining quality. At any given moment, it’s all over her face: she cannot sit still, cannot be alone, cannot describe how she’s feeling at any given moment. Episode 5 brought us a particularly devastating confrontation between her and Rebecca (Olivia Thirlby), the minister who cuts off their budding romance by identifying that Finley has very deep hurt to deal with and very little to offer a romantic partner.

“Just tell me what to do,” Finley begs, looking and failing to find the language to address her pain. The emotional core of Finley’s story is her absence of self-understanding—a story that draws her close to a long lineage of queer women struggling to self-define and attain visibility, even to ourselves, in a world that has never given us the language to do so.

Finding the stories of previous generations of queer women requires real sleight of hand; it’s a history marked by long, intermittent silences, and to research it is to parse everything the historical record leaves unsaid. Explicit, unmistakable accounts of sex and romantic desire between women are so uncommon as to be infamous (hey there, Anne Lister), and those that survive in the historical record were often suppressed and mislabeled by homophobic institutions or relatives, medicalized as abnormal, or labeled as illegal deviance.

In the absence of these stories, queers have long searched for shared language and understanding—a search that, on screen, looks like Carol’s charged gaze with Therese in Carol, Anne Lister of Gentleman Jack’s halting advances on heiress Ann Walker (amid a lot of dialogue, truly so much, on the politics of the 19th-century coal trade), Abbi Jacobson on Broad City resorting to metaphor to explain her new attraction to a woman, and a young Denise on Master of None’s groundbreaking “Thanksgiving” episode asking her friend to call her Lebanese instead of lesbian—the word just doesn’t feel right.

But that search also, sometimes, looks like wordlessness, the absence of speech, the pause that comes before admitting that you want to know yourself or someone else. Andrea Long Chu wrote in 2018 about one of the most extended examples of queer silence on television, the meticulously directed Buffy the Vampire Slayer episode titled “Hush”: “It’s no accident that one of the first major lesbian relationships in television history began in an episode where no one was able to talk.”

Queer media is, unfortunately, rife with stories about the effects of repression. Finley’s character is a notable update to that narrative and one that adds complexity. In the middle of queer-as-can-be, modern-day Los Angeles, surrounded by the legacies left by generations of activism, the effects of repression extend inward and become self-silencing—not an easy conflict to portray on television.

Finally, in “Lapse in Judgement,” we saw Finley talk. Confronted by her best friend Sophie Suarez, played by Rosanny Zayas, about the growing attraction between them, she goes from “I don’t know how I feel” to describe the way she pushes down emotion: “That’s what everybody does. That’s how you survive in the world.” By the end of the episode, and after an ecstatic, tender sex scene between them that almost killed me and everyone I watched with, something has broken open. “I don’t even like myself right now, like at all,” she confesses to Rebecca amid her guilt, asking, finally, for help.

With the show renewed for a second season, we’ll have the chance to see (hopefully soon!) where each of these characters goes next. We still don’t know if Finley is ready to know herself. But I’ll be here, watching, when she does. 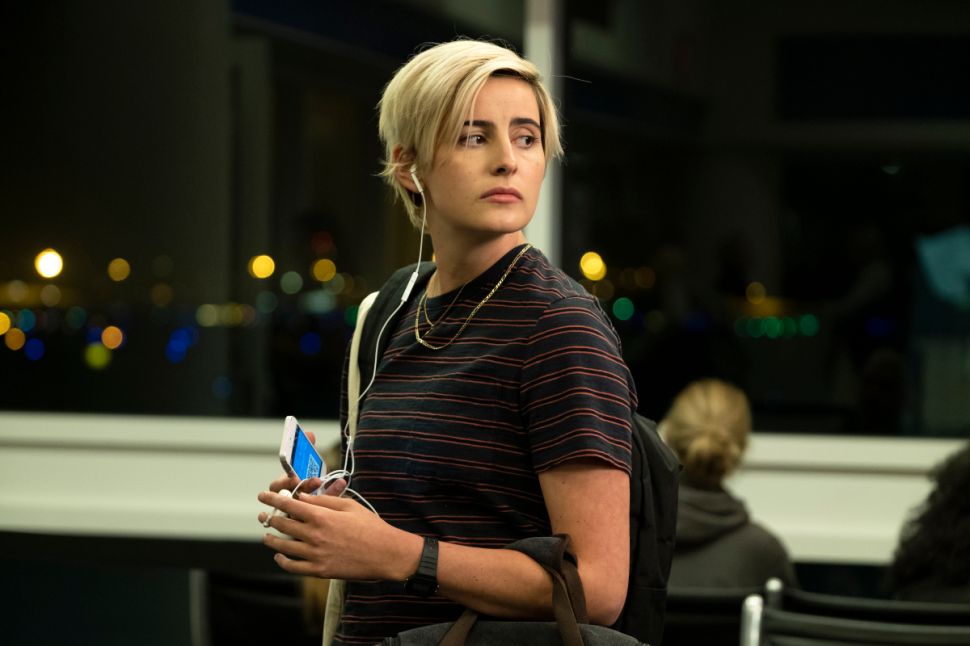