Son of the Bauhaus-trained, first Jewish architect to build a mosque in Israel, Tsibi Geva has always been interested in the psychological effects of architectural forms and their vernacular alternatives. “My interest lies in forms built by non-architects in moments of need and urgency,” the artist, who splits his time between Tel Aviv and Brooklyn, explains.

It’s this concern that, in 2015, sent Geva on the hunt for 1,300 salvaged tires for his installation Archeology of the Present, presented by the Israeli Pavilion at the 56th Venice Biennale. After researching across Europe, he settled on a now bygone tire recycling factory in his hometown for his source material, blanketing the façade of the Zeev Rechter-designed building in the Giardini with tires, transforming it into a bunker-like space. It was during this research that he encountered the alluring form of decompressed tires, separated from their steel belts, piled into gooey mountains of pitch black. Their resemblance to John Chamberlain’s crammed automobile sculptures or Robert Morris’ fluid rubber drapes stroke Geva. “I was amazed by the strength and expressiveness of their disposition and immediately knew I had to work with them in the future,” he tells Observer while preparing for his exhibition “Substrata” opening tonight at Albertz Benda.

SEE ALSO: Sketches Keith Sonnier Made 50 Years Ago Have Been Brought to Life in Neon Sculptures

Ultimately, Geva acquired 80,000 pounds of this rubber to form an imposing installation for his exhibition at Israel’s Herzliya Museum of Contemporary Art, “Where I’m Coming From,” which opened in September 2019. Sourcing them involved working with a recycling factory twenty minutes away from Kibbutz Ein Shemer, the collective community in which Geva was born in 1951. Each weighing around 1,760 pounds, the cubes of oozing tires sit atop industrial metal bars, forming an L-shaped barrier to carve a war-zone-like corner within the space. The hefty display feels both unpredictable and full of tension—which are stable themes in Geva’s sculptural works as well as his paintings of brisk, abstract gestures.

“Geva molds a vocabulary shaped during forty years of intensive career into a singular project that works simultaneously on biographical, political and material levels,” Aya Lurie, the director of the Herzliya Museum, tells Observer. “His vocabulary brings political and personal issues into the foreground of Neo-abstract Expressionism and reengages with the ready-made.”

For his show in the Israeli museum, the artist has paired the arresting installation with a leaning wall of paintings, for which he assembled thirty-five variously shaped canvases into an architectural body that tilts towards the wall with a 2.5-foot gap. Starting with sixty blank canvases, Geva turned their collective surface into mammoth size body awash in tempestuous marks of colors, heavily splashed or carefully drawn onto canvas.

A handful of the canvases Geva initially painted for his wall-spanning display at Herzliya Museum have made their way across the Atlantic for the artist’s new Albertz Benda exhibition, which delves deeper into his painterly observations and experiments with form. Suitably, Geva named the exhibition “Substrata,” which refers to fundamental, underlying basis on which anything is built. For him, the bedrock from which his work springs forth is his obsession with patterns, irregular ones, particularly.

Repetitive forms that defy perfection have always been an obsession for Geva, who is perhaps best known for his paintings that borrow patterns from keffiyehs (scarfs commonly worn by Arab men) or terrazzo tiles. His most recent paintings stem from his urge to shatter rigid motifs, be those the geometric patterns of a fence or geometrically perfect arrangements of building windows. “Vernacular architecture is more visible than it has ever been,” he notes, referring to living situations built by those in need due to political instability and environmental disasters. Growing up in Israel and Palestine, Geva is not a stranger to makeshift architecture, from Bedouin tents to illegal settlements on the West Bank. In his paintings, these forms are abstracted—translated and stripped from elements of materiality. Fleshy tones of pinks, browns and reds accompany black or white lines formed into loose systems that gradually dissolve into freeform. They come across as a visual mix of urban Mediterranean patterns and what resemble birds-eye views of lakes or winding paths. Like in their sculptural counterparts, rigid and man-made forms converge with something that feels innately organic, lending  a tense, unpredictable quality to the works that manage to be somehow abstract, familiar, deeply personal to the artist’s history with these shapes, and yet universally reflective of our tumultuous times. 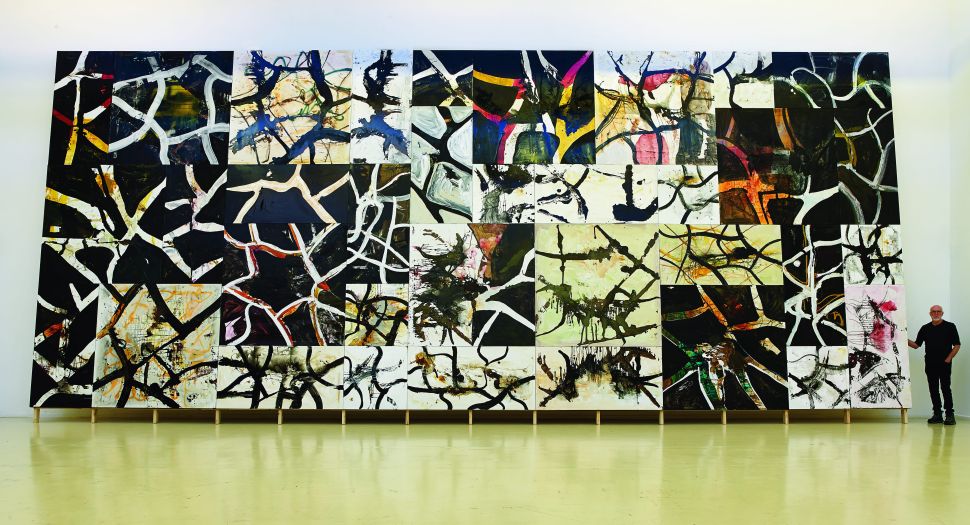