Giving voice to the silenced has long been a concern of art, from the Realist movement of post-revolution France and the 20th century muralists of Mexico, to body politics in performance art and video art from the last few decades. Chicago-based artist Adrian Wong, however, has been interested in communicating with those silenced in biological sense, connecting with people’s deceased or, for his most recent project, their living pets. Emerging from an urge to discover the non-linguistic state beyond our physical and communicative realm, Wong initially began working with young children as a social scientist after receiving a graduate degree in psychology from Stanford University in 2003. Realizing, as he explained to Observer, that “human affect is something poorly-suited for examination through a scientific lens,” he changed gears, getting his MFA from Yale University.

“My studio practice focuses on fields that operate outside of the empirical sciences, such as feng shui and geomancy, energy manipulation, astral projection, sound healing, cromniomancy, and most recently alchemy,” he explained ahead of a solo presentation at Chicago-based Carrie Secrist Gallery’s booth at the Armory Show.  His project will be part of the fair’s Focus section, organized by Jamillah James, a curator at the Institute of Contemporary Art in Los Angeles. Presented during the 25th edition of New York’s quintessential art fair, Wong’s installation will center around his collaboration with telepathic animal communicator Lynn Schuster, who will sit down for half-hour readings with fairgoers to communicate with their pets, based on their photos.

“Self-representation and personal truths, revisionism and projecting other possibilities into the world,” are the section’s main threads, James explained Observer—and Wong’s psychic collaboration certainly fits. “The idea of animal communication and telepathically communing with a non-verbal entity connects to this idea of wanting to believe in something and manifesting it, materially, psychically, and emotionally,” she said. Though she admitted “The idea of it may be met with skepticism.”

Participants are made aware that Schuster’s observations have the potential to provide a basis for artworks by Wong, similar to those which will be on view across the booth, including photographs, sculptures and paintings that stem from the duo’s recent collaborative work. Wong responds to Schuster’s readings by creating a customized pet furniture, such as a dog house or cat tree, a portrait of the animal’s previous life, or a cosmic geometry wall installation in tune with the animal’s “spirit,” in an attempt to “reconcile the medium’s conversation with the pet in form.” At his Chicago studio, the artist creates the artwork in house, using software programs Sketchup and Rhino for his furniture sculptures and pet portraitists from across the country for the paintings.

Wong initially connected with Wisconsin-based Schuster when the artist heard about a three-legged missing dog, named George, which eventually became more of a “spiritual guide” than a subject. Wong’s next encounter with the medium was a personal, and heartbreaking, occasion, after the unexpected passing of his pet rabbit, Omar. The shock and following grief after a sudden loss prompted the artist to reconnect with the medium, whose communication with Omar revealed that the rabbit was a reincarnation of Snoopy, the childhood pet cat belonging to Wong’s wife

“There is so much joy and excitement that my eyes are tearing up,” says Schuster, when I ask about her first reaction looking at a picture of my five-year old rescue dog, Bagel, who I adopted from Tennessee with my ex-partner when he was a two-month old puppy. Bagel’s feelings about our separation and loss of an important person in his canine life have been a curiosity of mine for over a year.

Was he happy living with me? How would he react if he saw his former co-parent? Schuster’s eyes closed, “He would hide behind you if he saw him in a crowd,” says Schuster, elevated by the emotional intensity she felt through communicating with Bagel, whose behavioral range has always been dependent on the amount of attention and physical connection he’s given. “He is a happy dog who is healing himself and you,” she observed, laughing a little as she felt my four-legged companion’s impassioned energy.

When I ask Schuster about Bagel’s feelings about my current partner, she positively responds: “There is a conversation on telepathic level between them—they see through each other’s eyes and souls.” Wong joins the conversation to ask Schuster to draw a picture of our current life through the dog’s perspective. What appears is a white light surrounding Bagel standing in our living room, where my current partner seems to be standing on his one side, me perched on a couch. “There are pastel shades of pink and minty green,” the medium adds. The artist begins to describe an abstracted image drawing on the aesthetics of cosmic geometry that could represent the balance of pet- human relationships, and our unique one in particular. Schuster, then, catches blobby shapes above Bagel’s head, which she regards as symbols of nurturing with their soft shapes, round on the edges, without any rough corners.

Wong notes that the fair setting, populated by collectors, enthusiasts and art world fixtures fiercely roaming over hundreds of booths, will be quite different than his typical work environment “marked by calmness and serenity.” Both the artist and Schuster are up for the challenge, ready for the unbelievable stories New Yorkers have to share through their pets. 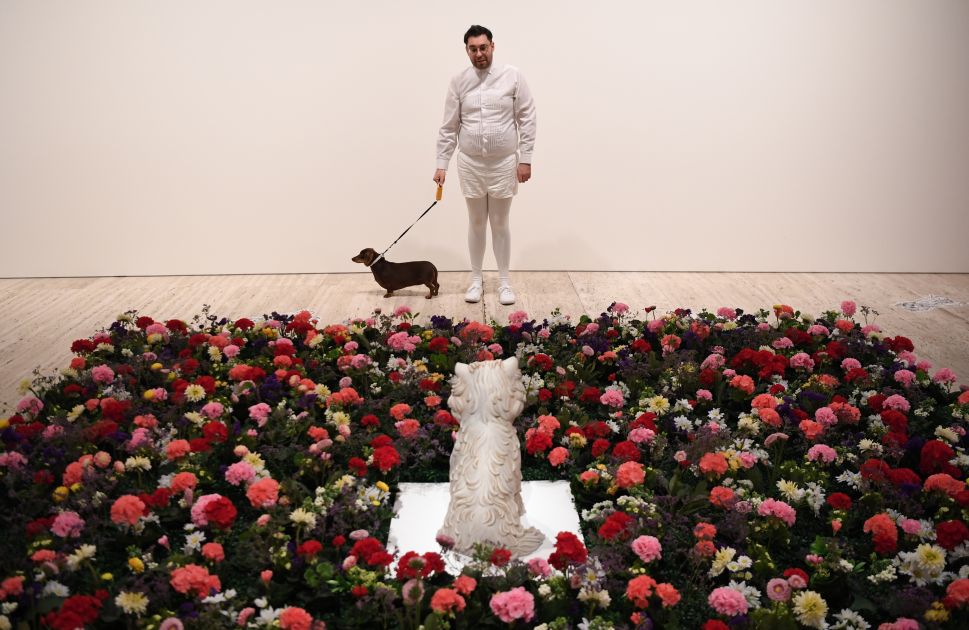