Ali Stroker plays favorites—in a good way. That’s what her upcoming American Songbook concert is all about.

“This is an opportunity to do what I want—everything I want,” she tells Observer. “It’s really a blend of all my favorite kinds of music—pop, musical theater, country.”

Set for February 28 at 8:30 p.m. in the Appel Room at Jazz at Lincoln Center, the show follows the actress’ “epic and extraordinary” (her term) year.

Quick rewind: In June, she won a Tony Award—a history-making first for an actor who uses a wheelchair—for her saucy-twangy featured performance as Ado Annie in Daniel Fish’s re-imagined Oklahoma! Hillary and Chelsea Clinton celebrated the actress in their book “Gutsy Women,” saluting her “commitment to making space for others and her willingness to ask hard and important questions” as an advocate for performers with disabilities. And Aerie, an American Eagle brand, added Stroker to the ranks of its empowering “REAL role models.”

“It’s been really, really wild,” says Stroker, 32, who’s been on TV on Glee and Ten Days in the Valley and has used a wheelchair since a car crash when she was 2 left her paralyzed from the chest down.

“This year has really allowed me to believe I’m enough in my work,” she says. “And that’s huge. For so many years I felt that I needed to prove myself. I am different. There are not many people like me in musical theater. I wasn’t sure if people would like it or accept it or really wrap their arms around it. I’ve felt so much support.”

So which songwriters is she wrapping her voice around in her concert? Stroker offers a sneak peek at three planned songs.

“Everybody Says Don’t,” from Anyone Can Whistle by Stephen Sondheim. “So many times in my career, I have felt I’ve not been sure of who’s behind me on this, but that I’m gonna keep going,” she says. “And it worked. For me, it’s an amazing song about taking chances and going after what you want and what you love. Even when the world isn’t sure about you, you don’t need them to necessarily agree. There are always, always, always challenges. You just follow your heart.”

“Here You Come Again,” made famous by Dolly Parton and written by Barry Mann and Cynthia Weill. “Dolly is one of my idols,” says Stroker. “When I was working on Oklahoma!, I stole some of my inspiration from her with my voice from her. The tone of her voice is one of a kind. I wanted to honor her and the inspiration that she has given me.”

“I Cain’t Say No,” by Rodgers and Hammerstein from Oklahoma! “I’m excited about taking songs I did in Oklahoma! out of context and singing them in a concert setting.”

Stroker, who’s from Ridgewood, New Jersey, and now lives in Manhattan, won’t be on stage all alone. In addition to four musicians, led by music director John Fisher, an artistic collaborator and friend since 2005, she’ll be joined by “surprise guest stars.” Behind the scenes is her director, David Purlow, founder of the Actor’s Gym studio and Stroker’s boyfriend. They met 15 years ago at New York University and “got together four years ago,” she says. “He helps me make my work very specific. That’s what makes artists powerful.”

Along with a couple of new acting roles she can’t discuss “because they haven’t been announced yet,” Stroker’s calendar is dotted with various speaking engagements and performances. That includes a July 10 concert with San Diego Symphony. On March 26 she’s giving the keynote address at the American Occupational Therapy Association’s (AOTA) annual conference and expo in Boston.

“The planets aligned,” says Scott Trudeau, practice manager at AOTA, who adds that when the group reached out to gauge Stroker’s availability, her reps said that she was interested in working with therapy groups. “We’re thrilled.”

So is she. “It’s cool to speak on things that I care about—representation, progress in the entertainment industry, disability, theater, storytelling,” Stroker says. “Those are things that I really believe will change the world and our lives. The way I see it is that I’m here once. What kind of impact can I make?”

So far, a deep one. She’d already made Broadway history in 2015 in Deaf West’s revival of Spring Awakening by being the first actress who uses a wheelchair to appear on Broadway. Her Tony victory gave her a platform from which to speak out about theater accessibility, including backstage. Lincoln Center worked with Stroker’s team to configure the Appel Room to make it accessible.

“I got lucky,” Stroker says. “I’m getting to tie my mission to art-making.”

In other words, every artistic endeavor, like every picture, tells a story. That includes a striking black-and-white photograph capturing Stroker with her gaze skewed skyward that’s being used promote her Lincoln Center concert.

“That photo was really fun. I did a shoot with Jenny Anderson,” she says. “I was about to go into Oklahoma! on Broadway. We decided to play with different angles. I don’t exactly remember what I was thinking. It’s not that deep. I was looking up and looking forward. And I still am.” 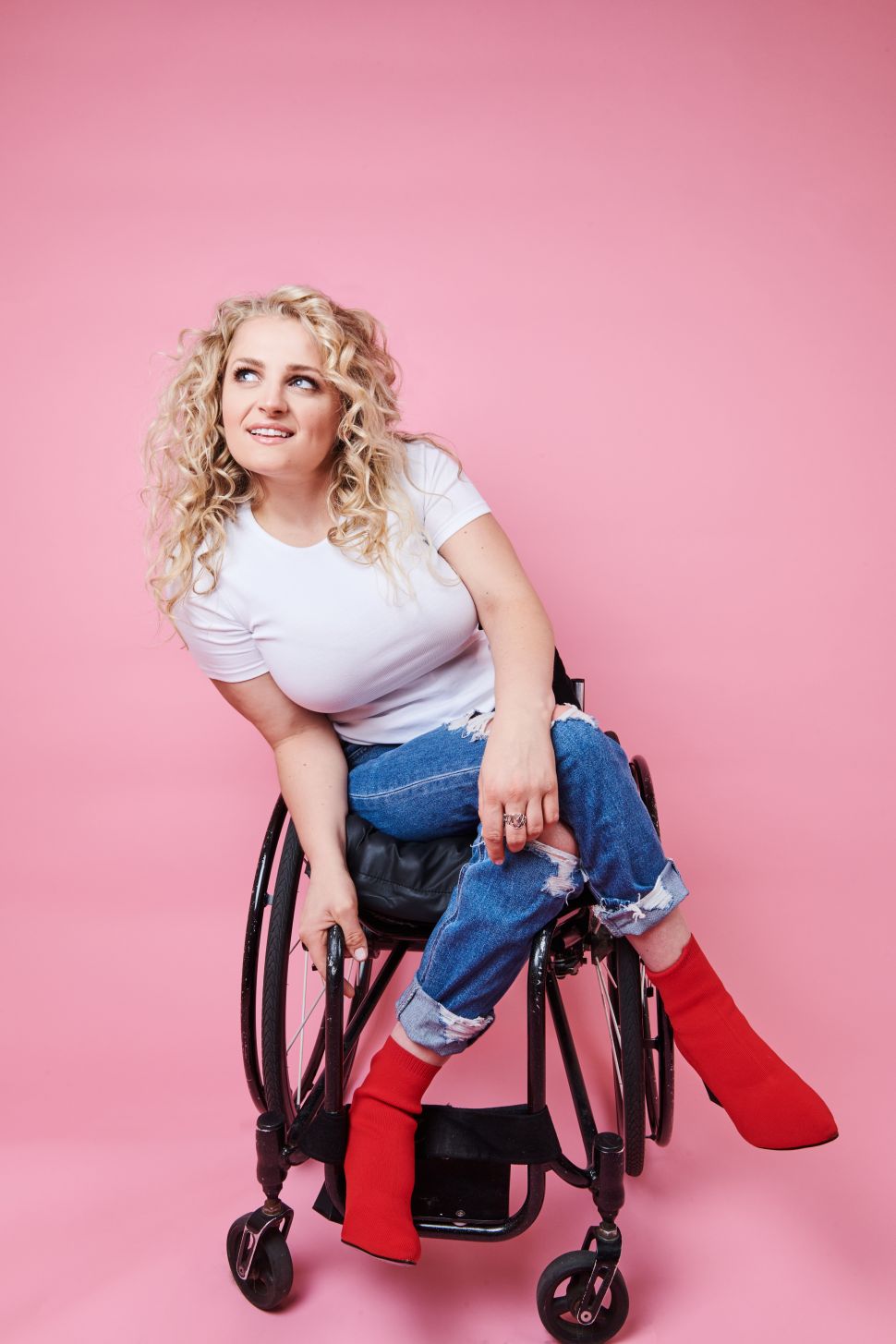