When the small Pennsylvania institution the Allentown Art Museum first acquired a striking painting of an auburn-haired girl in 1961, it was immediately assumed that the distinctive canvas was painted by the Dutch master Rembrandt. However, an organization called the Rembrandt Research Project came to dispute this notion, claiming that the painting was instead likely made by someone in Rembrandt’s studio, like an assistant or apprentice, but not by the man himself. Now, decades later and per the results of an extensive conservation effort, it appears that the museum’s original assumption may have been correct, and that Portrait of a Young Woman may indeed be a Rembrandt that was obscured over the years by varnish.

NYU Institute of Fine Arts conservator Shan Kuang worked on the conservation project, and relayed to CNN that several experts who’ve studied the painting in question have now credited it to Rembrandt. However, in an email to Observer, Kuang also emphasized that “the conservation and technical research do not-and cannot-‘prove’ the authenticity of a painting per se. Rather, they provided fresh insights into the painting’s execution and, crucially, corrected some prior observations and misinterpretations.”

“It was the fashion, in the 1920s, to not see any texture,” Kuang told CNN when discussing the surface of the painting and how it had been altered over the years. “We call it a ‘mirrored surface’—people wanted to see their reflection, which is really counter to what a Rembrandt should look like. The restorer was so frustrated building up the layers of varnish to make the texture disappear, that he actually poured it on. It was the consistency of molasses, and you could actually see the drip marks.”

According to Kuang, it was this altered surface that had lead the Rembrandt Research Project observers to believe that the painting in question could not possible have been made by Rembrandt. The reason the organization gave at the time for their dismissal was that the painted young woman’s clothes appeared muddled, when Rembrandt was always extremely precise in his renderings.

Much noise has been made in the art world recently about the effects that bed restoration efforts can have on valuable works of art. In January, a set of images from the famous Van Eyck Ghent Altarpiece went viral due to the seemingly severely altered visage of the mystic lamb, the central figure of the artwork. Although people assumed that the lamb’s humanoid face had been added by modern restorers, in fact, the lamb had originally been painted with huge eyes and a pouting mouth, and subsequently obscured in the 16th century by another fateful coat of varnish.

Portrait of a Young Woman will be on display at the Allentown Art Museum from June 7 through November 1 of this year, if you want to get a look at the de-varnished canvas up close. 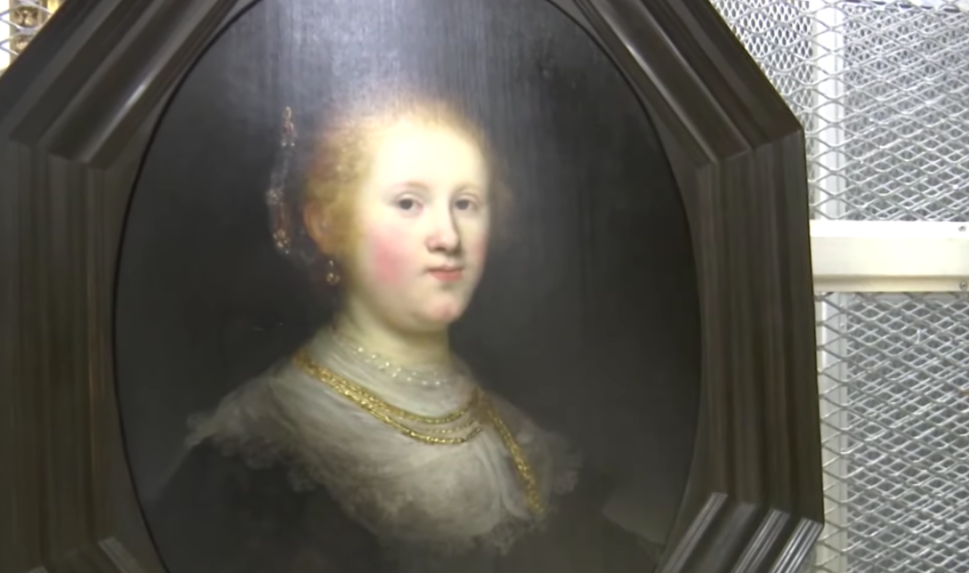