What if the dystopian future we’re dreading actually looks like a transcendental utopia? Andrew Krivak’s third novel, The Bear, begins with the end of humanity. Its opening line reads as straight reporting: “The last two were a girl and her father who lived on the old eastern range on the side of a mountain they called the mountain that stands alone.” From the book’s start, the gig is up; we know it’s all over for humankind. So why does it feel as though these two are living in paradise?

In this arresting, exquisite novel, time acquires a new quality. When human civilization is over and there’s no hope left for society, what Krivak imagines is a stillness. An incandescent calm settles upon the earth now that humans are no longer capable of doing any further damage. His unnamed father and daughter live a simple life. Together they hunt, forage, farm, care for one another and tell stories. Gone is rush hour, traffic, neighbors, colleagues. With no one but each other and the earth, the urgency that marks our days is missing.

SEE ALSO: Jenny Offill on How ‘Weather’ Mirrors Her Own Struggle and the Book She Abandoned

Life is dictated by the seasons, not deadlines. Talking about spring as it returns after winter, Krivak writes, “Those were the days when the girl left the house in the morning with her father and studied a new world that pushed up from the dirt of the forest and emerged from the at the edge of the lake, days in which she lay on the ground beneath a warm sun and wondered if world and time itself were like the hawk and eagle soaring above her in long arcs she knew were only part of their flight, for they must have begun and returned to someplace as of yet unseen by her, someplace as of yet unknown.” Yet, for all this pastoral splendor, certain facts are missing. Namely, how did this dire fate come to pass? What series of events led humanity to these final two individuals?

There is no shortage of plausible worst case scenarios available to novelists today. Other authors (Cormac McCarthy’s The Road, Jeff VanderMeer’s Southern Reach trilogy, Ling Ma’s Severance to name a few) focus on the catastrophe followed by its fallout. This is what makes The Bear so striking. Krivak isn’t interested in how or why human society is ending. Instead, he found the origins of The Bear through the bedtime stories he told his children. “When my sons were much younger, I needed to find a story to get them to sleep,” he tells Observer over the phone. “As you do, because you’re sleep deprived and because they always want to know about where you’re from and what you were like as a kid, I used to tell them how a bear helped my father and me find our family dog Troy in the woods. It’s not true, of course, but the whole idea of the woods and of bear in northeastern Pennsylvania was. They would ask me to tell it over and over. And at a certain point they stopped asking about it.” Children grow up, but, as both a parent and writer, this story lingered.

“Maybe about two or three years ago, I decided I would try to write down the story for them as a gift for Christmas,” Krivak remembers. Sometime after, “I was out fishing [near Jaffrey, New Hampshire where Krivak splits his time] one day in my boat. It was one of those days where there’s a kind of an early summer mist coming off the and there was no one around at all. I just thought, ‘What was this place like when people had just come here, the first people to be in this place?’ And then I thought, you know, probably indicative of the times, ‘What’s it going to be like for the last ones?’” Krivak recalls that shortly afterward, “I pulled in my line and I rode up to the dock and I just went inside the house and I just started writing that first line.”

It might be a leap for other parents to use well-worn family storytelling as the basis for a literary novel, but Krivak’s first novel, The Sojourn, was a National Book Award finalist as well as the 2012 winner of the Dayton Literary Peace Prize. In addition to his second novel The Signal Flame, he’s also the author of the memoir A Long Retreat, which examines Krivak’s desire to become a Jesuit priest, an eight-year experience. “When I was teaching, I started to wonder about whether this religious life was with the proper creative outlet for me.” Realizing he would never be happy without prioritizing his creative life, Krivak left the order a year before he would have become an ordained priest.

I was curious how his religious experience may have influenced this book. “The notion of the composition of place in prayer, which comes out of St. Ignatius’s spiritual exercises, brings one into, as one prepares oneself for prayer or contemplating scripture, the very setting and emotional tone of the story.” He elaborates with an example, “Say the passage in the storm of the Sea of Galilee. Put yourself in that boat. Imagine the fear of the apostles. That, having been trained as a Jesuit, is really important for me as a writer, especially writing about nature. And just seeing the world as a thing created and a thing precious as a result of that creation, is was obviously there. Everything moves and lives and has its being in that in that creation.”

This respect for nature informs his choice to open The Bear at the point of human extinction. In doing so, he makes space for a meditation on stewardship. Without interrogating the specific way humankind has ruined the world, human conflict exits the conversation. What’s left is a tranquility tinged with regret: the beauty of silence and the wisdom of nature beyond human intervention. Struck by the book’s peaceful pacing and meditation on nature, I read with a humble sense of awe rather than an ever-growing sense of dread. Too often dystopias leave readers off the hook—The world’s ending anyway! It’s too late! There’s nothing you can do! —with panic superseding any sense of agency.

Concentrating on nature as the guidepost for the book, Krivak reveals how much we’re losing when we fail to serve as good stewards of the planet. However, his tone is never didactic or melodramatic. What’s done is done. This father and daughter are merely another species on the brink of extinction, but they must carry on. At the end of the world as humans know it, they still need to prepare meals, tools, clothing, and collect resources. The careful attention to survival techniques and living off the land will remind readers of the beloved 1986 Newbury honor-winning young adult novel, Gary Paulsen’s Hatchet, a book with which Krivak was surprisingly unfamiliar.

An accident during a long journey to the coast to collect provisions leaves the daughter alone, carrying her father’s remains back to the mountain where her mother is buried. On her own, what is left to live for? What starts as a trek back to honor her parents opens the young woman up to a new way of living in harmony with the world. While she is the last of her kind, Krivak doesn’t give into the impulse to make her a hero or a warrior. Interestingly, it became harder and harder for me to not confuse the young woman with another young woman consumed with survival: the seventeen-year-old activist Greta Thunberg. How frustratingly fitting that while we as a society fail to do our part, it’s a young woman who becomes a leading figure to shoulder the burden of the movement to save humanity from itself. In The Bear, it’s a woman who bears witness to its end.

In a twist, Krivak also refuses to make the woman a savior or imbue her with superhuman abilities. When she needs help the most, the natural world intervenes. A series of animals steps in to aid the young woman as she travels home. Without anthropomorphizing animals or concocting a folksy message, Krivak manages to establish communication through actions and spirit between the young woman and the natural world. With no one left to speak with, she is free to listen to the earth. In doing so, she finds that perhaps humankind’s hubris was their dogged individualism. Turning away from the lessons that nature has to offer us, we disrupted the harmony necessary to survive. The transcendentalists may have been right about returning to nature, but the myth of self-reliance was a fallacy. Just as readers now know that Henry David Thoreau didn’t truly live as an individualist at Walden, no man can survive alone. Survival is a communal act.

Krivak elaborates on this note elaborating that his novel offers a glimpse into a moment where “a veil lifted between nature and humans. This notion that we all live separately somehow just disappeared [for me] because there was no reason for there to be a separation. And that’s when I began to think, you know, perhaps [the end of the world] would be like that.”

A dystopian utopia is not a bedtime story told to children. The evolution of this story is a curious one, but consider one of the earliest stories passed down through Judeo-Christian faith: the creation myth of Adam and Eve. Krivak links the exodus from Eden to his story as well. He reflects, “I wasn’t pondering the possibility of human extinction when I set out to write this, but once that became the story, it was liberating. When you consider the hubris of the way society disregards nature, we’re not good stewards. And so in the in the same way that the first two [Adam and Eve] in Hebrew scripture are told to be good stewards, I took that message back to the last two. I didn’t want this story to be a post-apocalyptic catechism where everything is torn down and burning. I wanted it to be as beautiful for the last two as the myth tells us it was for the first two.”

The end of the world could be upon us, but any possible future depends upon community with nature as much as with each other. The Bear is more than a parable for our times, it’s a call to listen to the world around us before it’s too late. With loving respect and acute awareness, The Bear imagines the ecstatic balance of a world without us. 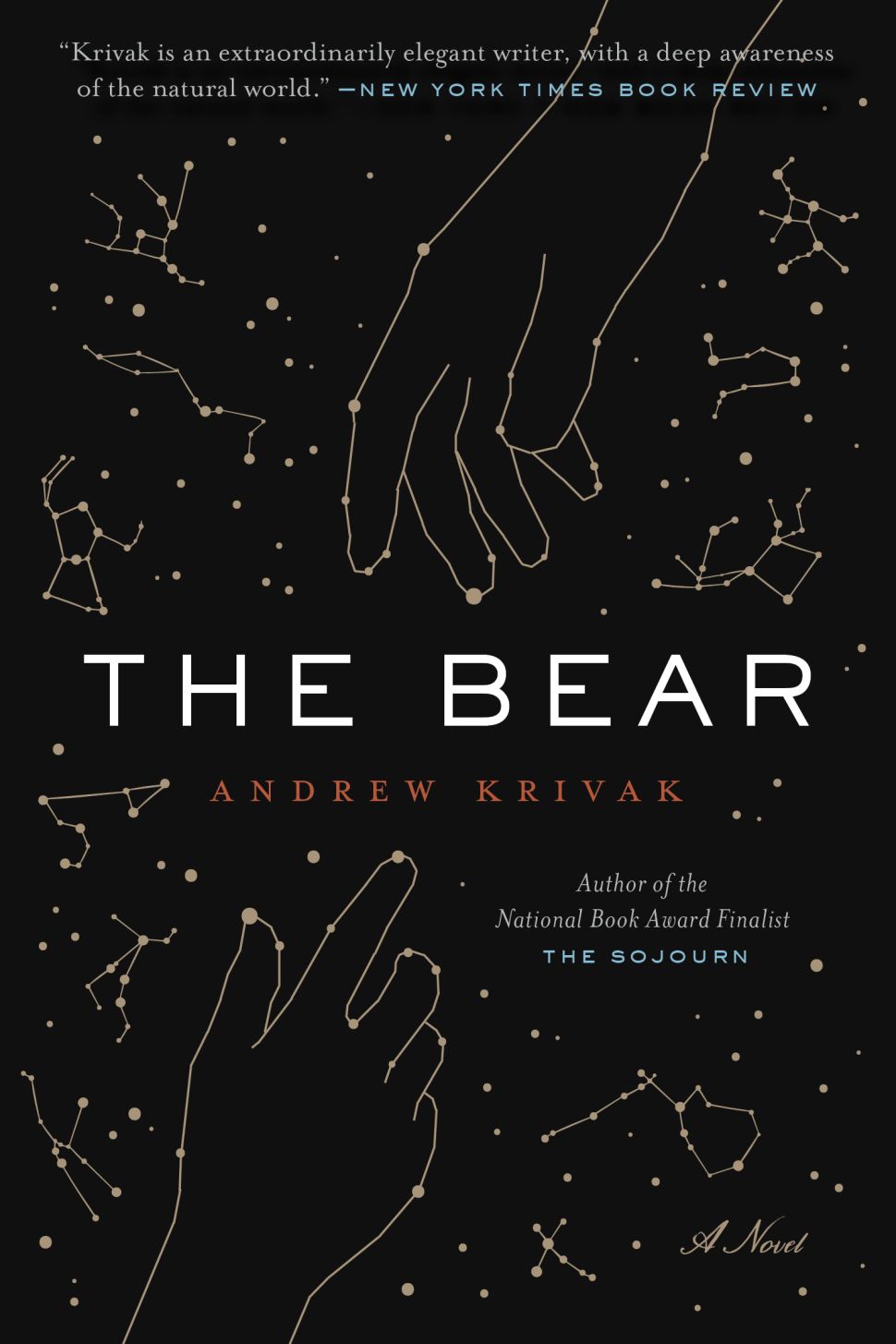