It’s Fashion Week in New York City, so the status of your wardrobe may be at the top of your mind. Whether you are in the market for a dapper new suit or a swanky new dress, augmented reality (AR) may play a big role in how you shop moving forward.

A growing number of companies are giving consumers new ways to try out a new wardrobe. Last year, 100 million people used try-before-you-buy augmented reality tech while shopping for their new wardrobe, and in 2020, that number is only going to get larger. The retail sector is expected to spend a whopping $1.5 billion on augmented reality and virtual reality technology in 2020, according to the market research firm International Data Corporation.

SEE ALSO: Bankrupt Fashion Empire Forever 21 Will Sell Itself for 99% Off

So far, online retailer ASOS is leading the charge. In January, the company launched an inclusive augmented reality program called “See My Fit” that allows customers to virtually try on 800 different dresses. The See My Fit app shows clothing items on models that more closely reflect individual customers. The company is using models of all shapes and sizes, making the shopping experience more inclusive and less judgmental.

ASOS’ move comes on the heels of Gap, which launched its AR app called “DressingRoom by Gap.” The app allows users to shop by styles and select from five body types, helping consumers understand how clothes will actually fit. “The fashion industry has not traditionally been geared toward helping people understand how clothes will actually fit. Gap is committed to winning customer trust by consistently presenting and delivering products that make customers look and feel great,” the company said in a statement.

The foray of ASOS and Gap into AR follows the development of the Oak Mirror made by startup Oak Labs in 2015. The Oak Mirror, an augmented reality interactive display for fitting rooms, acts as both a touch screen and a mirror. Shoppers can use the mirror display to request garments in different sizes, colors or even items that shoppers usually buy together. Retailers like Topshop and Uniqlo have also launched similar projects. In addition, Saks Fifth Avenue’s beauty floor and Sephora have launched magic mirror concepts, which allow shoppers to virtually try on makeup, in recent years.

These developments are part of a bigger push for traditional brick-and-mortar retailers to woo consumers into their stores rather than opting to shop online. With 9,300 stores closing in 2019 alone, retailers will continue to find creative ways to keep customers in their stores in order to survive.

According to Retail Drive, majority of Americans still want the physical experience of brick-and-mortar shopping. These AR developments can help retailers bridge the gap between the benefits of online shopping and the advantages of brick-and-mortar. AR technology is allowing retailers to analyze shopping patterns, meaning merchants will have a better understanding of what exactly to keep in stock for consumers at their physical stores. 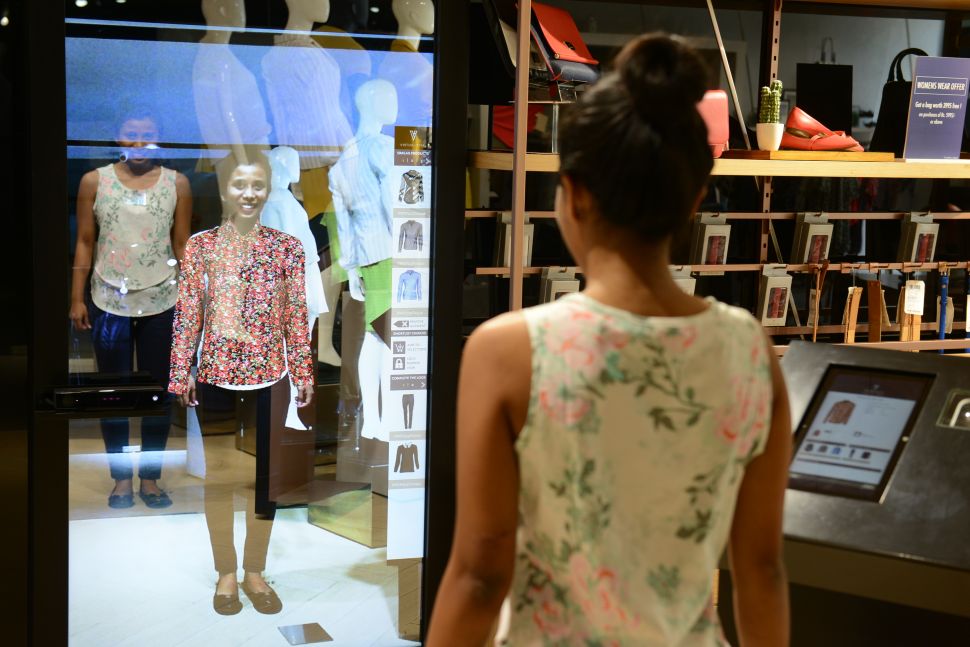