At 4:45 a.m. China time on Saturday, February 1 (3:35 p.m EST on Friday, January 31, in the U.S.), I woke up from lingering jet lag in my parents’ home in Shanghai. While half-dreamily pondering what to do on my last vacation day in China during this entertainment-deprived time of epidemic, I casually checked my phone and was shocked to see 25 unread messages, including five missed calls from my boyfriend in New York, warning me that I might not be able to return to the U.S. on time because, a few hours earlier, President Donald Trump had issued an executive order to ban all foreign nationals who had traveled to China over the past two weeks from entering the U.S., as a measure to protect American soil from the Wuhan coronavirus.

The executive order would precisely affect people like myself who hold a work visa in the U.S. I’d been in Shanghai for a week to celebrate the Lunar New Year with my family and was set to board a plane back to America on February 2. That plane was scheduled to land in New York at 6 p.m. on Sunday, but the entry ban would take effect at 5 p.m. That meant I had to find a way to board an earlier flight that would not only land before 5 p.m. Sunday but also leave me enough time to get through customs before the ban kicked in.

SEE ALSO: Exactly How Worried Should You Be About the Coronavirus Outbreak?

Realizing the emergency, I sprang out of bed, booked the earliest air ticket to the U.S. I could find online departing in four hours, woke up my parents, panic-packed my suitcase like a refugee and rushed to the airport.

The international departure floor of the Shanghai Pudong airport that day was a strange juxtaposition of chaos and silence—on one side there were rows of empty counters of airlines that had suspended flights to and from China, while on the other side stood crowds of people like me desperate to make their planned trips happen.

As expected, the air ticket I’d booked online earlier was a waste; it was too short notice for the airline to process an itinerary, and there were no available seats on that plane anyway. I turned to the ticketing counter at the airport. And thank goodness! I was able to get one of the last few slots to the U.S. that day: a $4,000 one-way ticket to JFK.

My wallet hurt badly, but both my mom and I jumped for joy. The situation could have been a lot worse: had I slept in a few more hours that morning, I would’ve been left with either the truly last U.S. flight that day, selling for over $10,000 per economy class seat, or no option to leave China at all—in which case, I’d probably work remotely for an unknown period of time until the president lifted the travel ban or I got fired, whichever came first, and hopefully would be able to find my dog a new home. [Editor’s Note: As an incredibly valued member of our team, we definitely were not going to fire you, Sissi!]

The travel ban announced on Friday was part of the Trump administration’s response to the World Health Organization (WHO) declaring the outbreak of 2019-nCoV, a new type of coronavirus, as a “global health emergency” a day earlier. The executive order calls to deny entry of all foreign nationals (except immediate family members of U.S. citizens) who have travelled to mainland China in the past 14 days and mandates that U.S. citizens and permanent residents with travel history to Wuhan, Hubei Province, where the virus first emerged, be quarantined for 14 days after entering the U.S.

WHO has explicitly advised against such extreme measures to wall off foreign visitors. In its coronavirus brief on Thursday (which declared the global health emergency status), the international organization said it “does not recommend any travel or trade restriction based on the current information available,” as per the anti-discrimination principles under Article 3 of the International Health Regulation.

“Banning travel from China is unlikely to keep the new coronavirus out of the United States,” Jennifer Nuzzo, an epidemiologist with the Johns Hopkins Bloomberg School of Public Health’s Center for Health Security, wrote in a column for The Washington Post on Sunday, “especially as the geographic footprint of the epidemic continues to rapidly expand. This virus is simply moving too quickly and spreading too quietly for us to assume that we know where in the world all cases are.”

It was the U.S. government’s first time to impose a blanket travel ban in response to a global infectious disease outbreak. But, in retrospect, the decision wasn’t a complete surprise given today’s “America First” political climate in Washington and the terrifying unknowns about this particular disease. U.S. politicians have called for border closure and travel suspension during past public health crises, including the 2014 Ebola outbreak from West Africa and the 2009 H1N1 swine flu pandemic from Mexico. The Obama administration rejected those proposals both times with the support from WHO and the U.S. Centers for Disease Control and Prevention (CDC).

The White House’s rationale for the strict measure this time was that the CDC’s first confirmed case of human-to-human transmission of the coronavirus in the U.S. on Thursday, along with early evidence in China suggesting that the virus can be transmitted by people who haven’t yet exhibited symptoms, has put the American public at an increased risk of contacting the deadly virus.

“The CDC, along with state and local health departments, has limited resources and the public health system could be overwhelmed if sustained human-to-human transmission of the virus occurred in the United States,” Trump wrote in Friday’s executive order. “Sustained human-to-human transmission has the potential to have cascading public health, economic, national security and societal consequences.”

Citing government numbers that there were an average of 14,000 people traveling to the U.S. from China each day in fiscal 2019, the president added, “The potential for widespread transmission of the virus by infected individuals seeking to enter the United States threatens the security of our transportation system and infrastructure and the national security.”

The first case of the novel coronavirus infection was found late December in Wuhan, the largest city in central China, and quickly spread to the rest of the country and beyond. According to WHO, as of Sunday, the coronavirus had infected 14,557 people globally—14,411 in China with a high concentration in Wuhan, eight in the U.S. and 138 in other countries—and killed 304 people, all in China. On late Sunday, the first coronavirus-related death outside of China was confirmed in the Philippines.

“I want to stress: the risk of infection for Americans remains low,” Alex Azar, Secretary of Health and Human Services and chairman of the coronavirus task force set up by Trump, said on Friday. “We are working to keep the risk low.”

Since Trump announced the travel ban on Friday, several countries have followed suit. Australia issued the same restriction to all foreign nationals who had stepped on Chinese soil in the past two weeks; Singapore ordered a similar ban but made an exception for long-term visa holders like workers and students; and Japan denied entry of foreign nationals who’d travelled to Hubei Province recently but left the door open to people from other parts of China.

To date, a total of 62 countries have issued various travel restrictions targeting Chinese nationals and others who have been in China lately.

Canada, in contrast, has taken a starkly different approach. On Friday, Canada’s Health Minister Patty Hajdu told reporters that Canada wouldn’t follow Washington’s move to declare a national public health emergency and ban foreign entry. She reiterated WHO’s stance that governments should respond to the crisis based on evidence, not fear.

“Our position is completely in line with the WHO’s position,” Hajdu said, “which is that, at this time, there’s no sufficient evidence saying that the virus can be spread when people are not exhibiting symptoms.”

The U.S. Secretary of Health and Human Services will advise Trump to assess the executive order every 15 days to determine any modifications or termination. Until then, the travel ban mostly affects student and employment visa holders in the U.S., as well as regular business travelers who have recently visited China. As of 2019, there were about 1.1 million foreign students studying in the U.S. under the F1 visa program, according to the Institute of International Education, and 420,000 tax-paying foreign nationals working in the country under the H1B employment visa program, per USCIS data. About a third of those two visa holders are Chinese nationals.

Disclosure: Sissi Cao is a Chinese citizen living in the U.S. for 11 years, six years as a student and five years as a skilled worker. 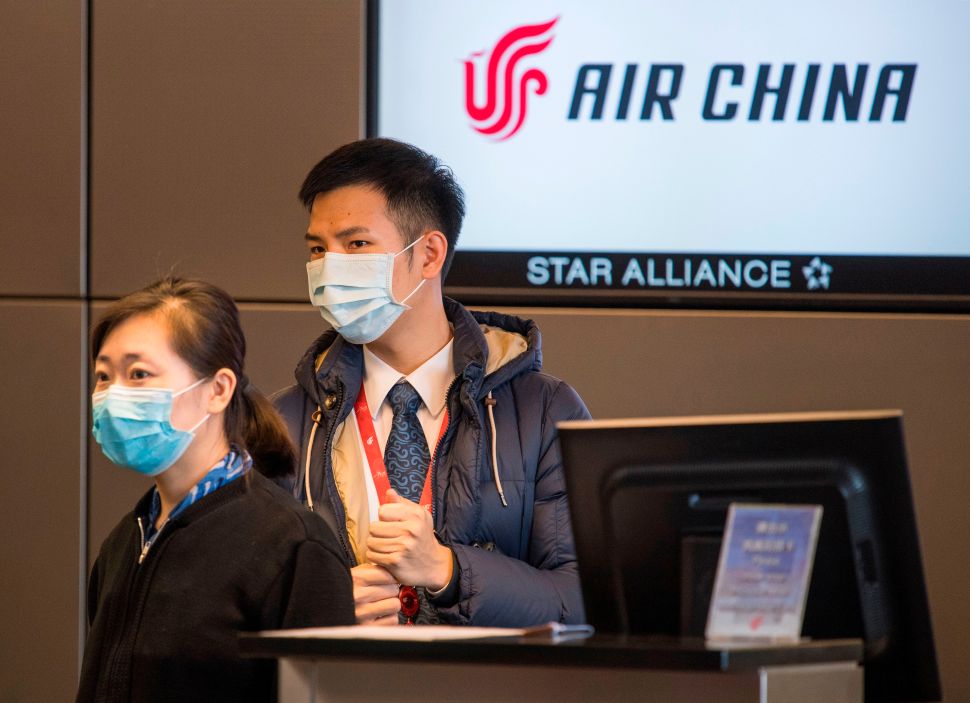