New York is an unending construction project; scaffolding shielding building façades and mesh covers hanging from metal rods are quintessential parts of the urban texture. Artist Curtis Talwst Santiago takes the architectural debris he encounters on a daily basis in his Brooklyn neighborhood, Red Hook, and the rest of the city, as a starting point for his new exhibition “Can’t I Alter” at the Drawing Center.

Born in Canada to Trinidadian parents, Santiago spent last decade nomadically, traveling from his hometown, Toronto, to Lisbon, Brescia in Italy and Johannesburg. After residing in each city for a handful of months, the artist settled in his Brooklyn studio in late July to prepare for the biggest presentation of his career at the SoHo institution.

SEE ALSO: Artist Shantell Martin Takes Over Times Square Billboards to Ask, ‘Who Are You?’

“I thought about all the armor I needed while traveling the world as a person of color,” Santiago tells Observer, of the motivation behind this body of work. He was standing by a Greco-Roman style arch affixed onto a scaffolding, finished with wooden panels in jungle green, a tone he learned is mandatory for construction panels in New York. The arch, a feature of the Drawing Center’s show, is directly based on an ancient ruin that was located five minutes away from his Palazzo Monti residency in Brescia, providing a passage into the narrative he constructs for the rest of the exhibition.

Intertwining history with fiction, Santiago’s presentation tells the fictional story of an African knight, his alter ego, whom he calls Sir Dingolay. The character wears a colorful armor, though the artist keeps the reason vague—either because he has just returned home from a battle, or for the annual J’ouvert celebrations, a Caribbean carnival tradition that starts at dawn and is characterized by participants covering themselves with dirt, oil or paint to symbolize the chaotic elements of humanity. Dingolay’s covering is a bright beaded armor Santiago created. At the Drawing Center, Santiago’s mockup of the armor sits by a passage facing the works He Knight and She Knight, two spray-painted pieces on salvaged embossed tin rooftops. Together they guard the rest of the installation, which tells a story of drawing from ancestral knowledge, while also acknowledging the precariousness of dominant historical narratives.

Santiago is best known for his intricately-built miniature dioramas that reenact mythical or factual histories inside elaborate jewelry boxes, from the murder of Eric Garner to Cézanne’s The Abduction. These painstaking works have been shown at SITE Santa Fe Biennial, the FLAG Art Foundation and at the Toronto Biennial of Art. Though his large-scale takeover of the Drawing Center could seem quite opposite to his minute creations, Santiago explains they’re conceptually the same. “They are both about tricking the eye with materials, whether I use plaster for the arch or pocket lint for a miniature figure.”

This trickery is best embodied in a new series of drawings-cum-paintings on molded cast paper that he based on various walls he has encountered in recent years, including his studio wall and one from a Brooklyn brownstone. Semi-abstract figures in spray paint, charcoal, pastel, acrylic and even gold populate the corrugated surfaces, paying homage to history paintings as well as graffiti with juxtapositions of human figures who are seen either combatting in war or uniting for physical intimacy. These works are hung across the gallery space either directly onto the wall or placed within scaffolding, creating a labyrinthine structure dotted with small surprises Santiago has placed here and there, such as a miniature plastic replica of Sir Dingolay inside a diamond box—a subtle homage to his ongoing dioramas series. An upcoming solo exhibition at Lower East Side’s Rachel Uffner Gallery, opening March 1, titled “an erratum,” will further explore the artist’s experiments with bronze and glass, displaying Sir Dingolay’s vast collection of antiquity as the next chapter in his saga.

The exhibition at the Drawing Center culminates with a one-minute-long video projection, Sir Dingolay, in which Santiago appears as the titular character in red face wearing a beaded armor, dancing to his father’s favorite song by Trinidadian Calypso pioneer Mighty Sparrow. Growing up among the Caribbean diaspora in Alberta, he remembers the basement parties his parents hosted for the community. He used to watch the disco ball lights reflect onto glass wall tiles, and, now, the same colorful lights appear throughout the film reflected onto an ancient ruin set he built in Toronto. The red face has also become something of a signature for Santiago in recent years, a motif he first came across when he visited Trinidad as a child and saw his relatives in red face in preparation for J’ouvert. “That memory came back the second I sprayed a red circle for the first time,” he remembers. The red circle appears in various forms, sprayed onto figures’ faces in paintings or onto found images he has wheat-pasted across the show. In essence, many of the elements that the artist has combined to create the show are like this: visual cues he has collected, manipulated, and changed through use, combining history and fiction into a construction-like installation of references he has culled from across the globe 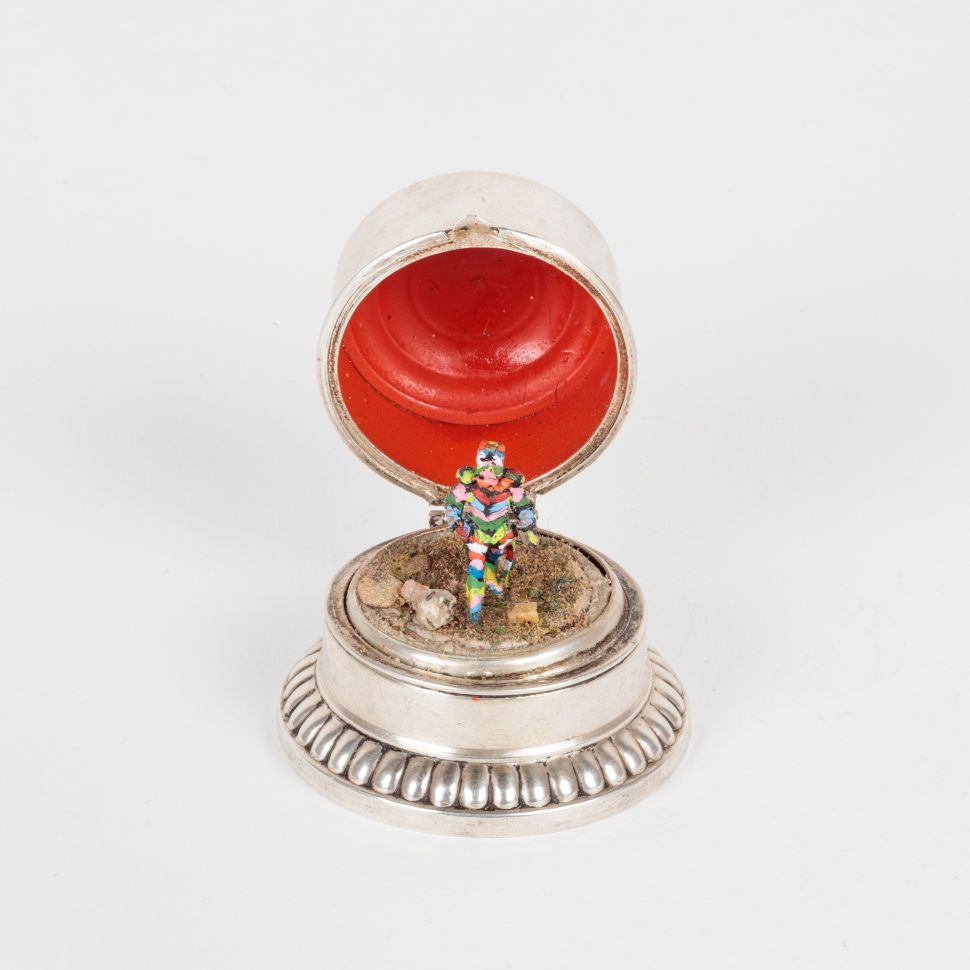