What better place than a ski resort to watch a movie about a ski resort? Last month the Sundance Film Festival debuted Nat Faxon and Jim Rash’s Downhill, an American remake of Ruben Östlund’s acclaimed 2014 Swedish black comedy Force Majeure. And the cold air in Park City was the perfect climate for the family-fractured frisson onscreen.

Both films share the same traumatic incident: a controlled avalanche dangerously close to a ski lodge nearly overwhelms the people sitting outdoors. And a married couple have very different reactions to how they protect their two pre-teen children—as well as each other.

SEE ALSO: ‘The Photograph’ Is So Much More Than Just a Romance-of-the-Week

“I was and am a massive fan of the original,” Julia Louis-Dreyfus told Observer. “I think it’s spectacular.” She co-produced the remake and stars as Billie Stanton, the shaken wife, along with Will Ferrell as Pete, her blithely defiant but secretly guilt-ridden husband. A few hours before Downhill’s world premiere, Louis-Dreyfus, Ferrell and the film’s directors talked about their experience while ensconced at the St. Regis Hotel in nearby ski mecca Deer Valley. (And yes, Louis-Dreyfus and Ferrell both made time to hit the slopes).

Ferrell hadn’t seen Force Majeure but was a big fan of the script that Veep writer and Succession showrunner Jesse Armstrong had written for the new version. “Julia and I had coffee, and I said, ‘I love it.’ And Julia was like, ‘Well, you might want to look at the original, just to make sure you’re in. It’s a certain tone.’”

So he did—while he was literally on a ski trip with some friends. And they all thought it was unsettlingly fantastic. “The silence that’s in the original? That tension? It was great,” Ferrell enthused. “I emailed Julia immediately and said, ‘Oh, I’m now even more in.’”

The two films share the same creative DNA, but their tone and style couldn’t be more different. In Force Majeure, writer-director Östlund focuses on a Swedish family taking a posh holiday in the French Alps. It’s European ennui sprinkled with absurdist twists, plus a climax on a snow-blind ski trail that’s downright existential. Cringe comedy is too light a term for the soul-sucking gut-punch it delivers.

“It’s a tonal puzzle,” Rash said of Force Majeure. “People will say, ‘I thought it was hard to watch—you know, in a good way.’ Because they’re cringing at the uncomfortableness of it. That’s something we didn’t want to lose.” Downhill, on the other hand, attempts at more empathy. The big change: make the leads Americans on a European vacation. Even better, put them in the Tyrolian Alps so they keep running into brusque Austrians. “We wanted it to feel identifiable and human,” said co-director Faxon. “These characters are flawed, but they are just making poor choices. We really wanted the audience left questioning whose side they were on.”

The fish-out-of- conceit makes Billie and Pete feel even more helpless when the avalanche rattles them. And instead of lashing out at each other, they try to pin the blame on the resort, a real-life ski destination called Ischgl. (Its actual motto? “Relax. If you can…”)

“It was Jesse’s idea that they might decide it’s the mountain’s fault and they go complain about that, the way you do as a couple,” said Louis-Dreyfus. “It’s like, ‘I need to talk to the manager,’ that kind of thing. Which is also very American, by the way.”

Ferrell laughed at how hardcore the Europeans are about personal responsibility. “It’s not as litigious a society,” he said. “It’s very much, like, ‘Here’s the sign. Read it. There’s your liability. If you walk over there, it’s a thousand-foot cliff. If you fall off the edge, it’s your fault. Otherwise, have a great day!’”

The other key difference is the fact that Billie and Pete are much older than the couple in Force Majeure. “These are slightly older parents,” said Faxon. “They had kids late in life and made that choice.” The filmmakers also added the fact that Pete’s father had died a few months before, and he still hasn’t gotten over the loss. That makes him cling to fun, life-affirming activities (heli-skiing, anyone?) and helps explain why he’s in denial in denial about what he euphemistically calls the “moment” that happened during the controlled avalanche.

Louis-Dreyfus’s character is also much expanded from her counterpart in Force Majeure. In Downhill, Billie is a far more complex character, clearly scarred by the incident, furious at Pete but aching for him to man up and confront his behavior. She’s no saint, either. A pushy Teutonic ski-bunny named Charlotte (Miranda Otto) engineers an opportunity for Billie to cheat on her husband—which she doesn’t completely resist.

Meanwhile, Pete covets the freedom and spontaneity of co-worker Zach (Zach Woods) and his girlfriend Rosie (Zoë Chao), who happen to be bopping around nearby European cities. After furtively following their #LiveYourBestLife posts on Instagram, he invites them to Ischgl. And that’s when things get real.

In a centerpiece scene that comes about halfway through the film and runs 11-12 pages in the script, Zach and Rosie come over to the Stantons’ hotel suite. Pete didn’t give Billie any prior notice; and she in turn makes them the prime audience for her epic rant at Pete. She even brings out their two boys as prime evidence against him. The situation goes from tense to intense, and then explodes into pure pain.

“We’re literally going from fourth gear and then downshifting—not into third or second, but into first,” said Ferrell. “The transmission of the movie just falls out right there in that moment.”

“We just ran it like a play,” said Faxon. No joke, it works like an alpine Who’s Afraid of Virginia Woolf. He and Rash blocked out two and a half days in the shooting schedule to shoot that one scene. “It was extraordinary to film,” he said. “We ran it a slew of times, and thought we pretty much got it. Then Danny Cohen, our D.P., said, ‘You might want to do one more. You know, there’s a complementary angle on the other side of their shoulder…’”

Faxon and Rush dreaded asking Louis-Dreyfus and Ferrell to come back. “We had already had the conversation, like, ‘You’re done. We did all the coverage, we got everything, everything now is just gravy,’” said Faxon. “So we had to sheepishly walk to the actors and say, “Would you mind doing this again?”

“I had to go to my trailer and gather myself,” said Louis-Dreyfus, visibly irked at having to go through that harrowing scene one more time. “And that’s the shot we used!”

“You could feel the energy from their performance when we were watching the monitor,” said Faxon. “She did it in such a way that was so powerful. I think that was that moment, like, wow, that was incredible.”

Julia Louis-Dreyfus and Will Ferrell, dramatic duo? It’s a surprising twist in a film that weaves between comedy and drama—and sometimes does both at the same time. That delicate balance is something the two actors are interested in continuing in their careers. “One hundred percent,” said Ferrell.

“I definitely am,” agreed Louis-Dreyfus. “To tell you the truth, I don’t think they’re that different. I think they’re very much intertwined. That’s the stuff that appeals to me very much as an audience member. Because that’s what life is anyway. I just think it’s just more interesting. Period.” 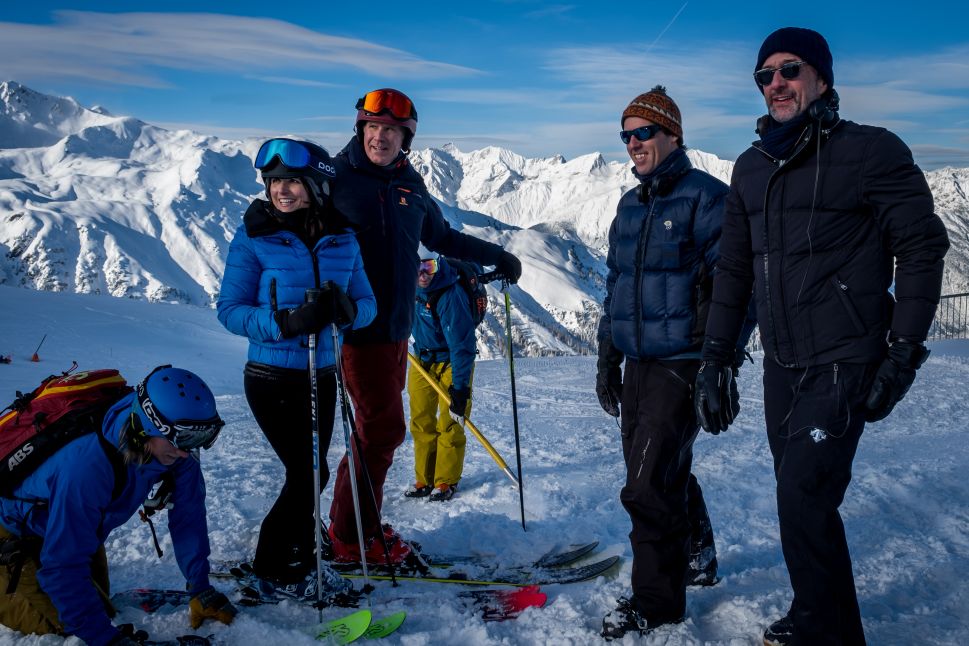