Question: What do you do with invasive green crabs that have been overrunning ecosystems from Nova Scotia to California?
Answer: You turn these crustaceans into biodegradable plastic.

This is the kind of eco-friendly innovation I love: Canadian scientists have devised a way to produce a bioplastic from crushed up crab shells. The methodology is to extract the super-strong polymer chitin, which is like a plastic but biodegradable, found in crustaceans.

The crab plastic project was crowdfunded by McGill’s Seeds for Change, headed by McGill chemist Audrey Moores. It’s a joint venture with Nova Scotia’s Kejimkujik National Park Seaside. Their mission is to create cups, plates and cutlery out of the massive abundance of green crabs.

As Moores told the CBC, “If we can make this invasive species come full circle as a solution to the plastic pollution issue that all the oceans are facing today, I really think that’s going to be such a great and innovative way to figure out the invasive species problem.”

And, in case you’re taking notes: the building block in chitlin, N-acetyl-D-glucosamine, is a sugar related to glucose. The plastic that is created is hard like glass. To give you the nuts-and-bolts on the chitin extracting process, here’s how a team of crafty students at the Royal College of Art and Imperial College London developed a process of turning lobster shells into single-use plastics. Again, completely biodegradable—and at no risk of harming sea creatures.

Six million to eight million metric tons of crab, shrimp and lobster shell waste are generated by the food industry each year. This method of creating chitin plastic has the double environmental benefit of solving what to do with crustacean shells, which usually end up in landfills.

And need I point out that almost every piece of plastic ever produced is still on the planet in some form. The crux of plastic is it’s durable, thus not biodegradable. Most plastic is never recycled and remains forever in our seas and on land. Since production was introduced in the 1950s, humans have produced over eight billion tons of plastic. Roughly 300 million tons of plastic will be produced this year. Most people who shop at a grocery store will use a plastic bag—once—then, throw it away; where it will be left on the planet for almost eternity. In case you’re wondering, a plastic bottle takes 450 years to break down.

Plastics that end up in our oceans are a danger to marine wildlife. Case in point: Seabirds, marine mammals and sea turtles can accidently eat or become entangled in the debris. And to get even more disastrously meta, hermit crabs are in danger because they are mistaking plastic for shells and getting trapped inside. Hermit crabs, which don’t have their own shells, look for shells to make their homes. An Australian study found that more than 500,000 hermit crabs die each year from confusing plastic as shells.

To put the whole thing into perspective, here’s how it feels to be an oceanic creature stuck in a plastic bag.

Meanwhile, back in 1987, green crabs had decimated all but 2% of the eelgrass that was at Kejimkujik Seaside park. Thanks to conservation efforts, roughly 34% of the eelgrass has been recovered.

“Invasive species may be detrimental to the ecosystem, however there’s always surprise solutions that we have to be open to,” Gabrielle Beaulieu, project manager for the eelgrass conservation restoration project at Kejimkujik Seaside, told the CBC.

On one hand, you have a macro-problem of non-biodegradable plastic polluting our planet without the ability to degrade in our oceans, while you also have an invasive species such as the green crab that’s been threatening the ecosystem of Kejimkujik Seaside.

So why not harvest the green crabs and turn their shells into degradable plastic? Let’s get that chitin rolling…

It’s a win-win solution. So, hopefully soon at grocery stores, when asked if you want paper or plastic—you can say: “No. I want green crab.” 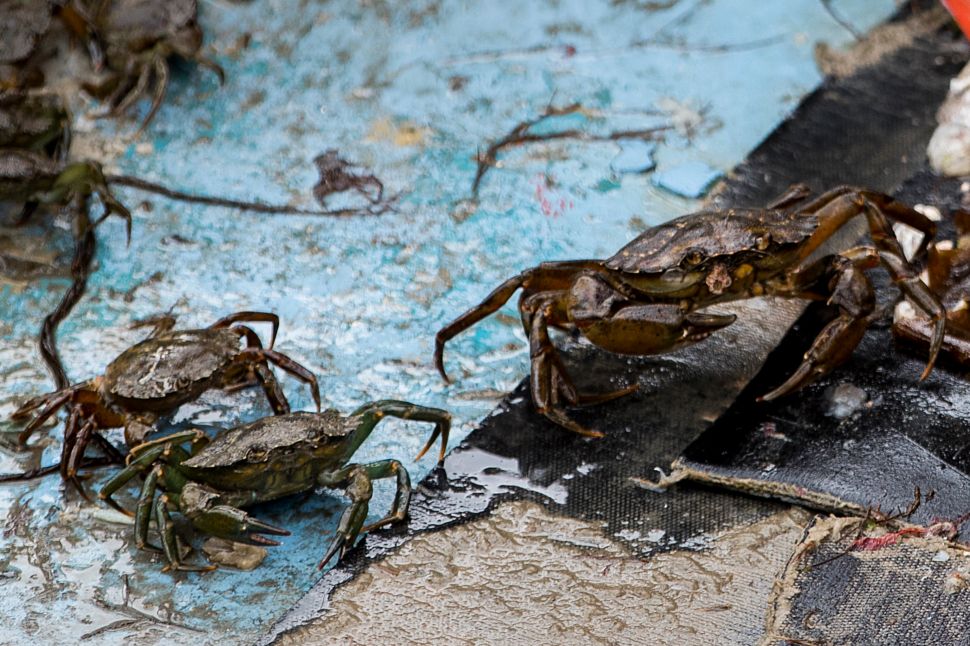