On Monday, disgraced film producer Harvey Weinstein was convicted on two of the five potential criminal charges he faced in his New York County sexual assault trial. Specifically, he has been found guilty of criminal sexual assault in the first degree and rape in the third degree. A sentencing hearing will be held at a later date. Weinstein was immediately sent to jail to await sentencing.

The convictions Monday marked the end of a winding legal road in New York, though Weinstein still has a Los Angeles County case pending. To understand how we arrived at this point, after years of “open secrets” and rumors, here is the complete timeline of Weinstein’s #MeToo scandal, from the first explosive allegations to his conviction.

October 5, 2017: The New York Times publishes a report that details sexual misconduct accusations from eight separate women ranging from unwanted physical contact to sexual harassment. Among the accusers, actresses Rose McGowan and Ashley Judd come forward publicly. Later, Weinstein issues a public apology that acknowledges that he “has caused a lot of pain” but denies any legal wrongdoing regarding harassment.

October 8, 2017: The Weinstein Co. fires Harvey Weinstein after he takes an indefinite leave of absence.

October 14, 2017: Weinstein is expelled from the Academy of Motion Pictures Arts and Sciences.

If you’ve been sexually harassed or assaulted write ‘me too’ as a reply to this tweet. pic.twitter.com/k2oeCiUf9n

October 28, 2017: The New York Times reports on additional allegations made against Weinstein dating back to the 1970s.

November 3, 2017: Amid mounting claims and lawsuits against Weinstein, the NYPD say they “have an actual case here” and note that certain allegations are “credible.”

November 28, 2017: The first civil claim against Weinstein is filed in the United Kingdom High Court.

December 16, 2017: Lord of the Rings director Peter Jackson tells Stuff.co.nz that Miramax, Weinstein’s former production outfit, supplied him with “false information” regarding Mira Sorvino and Ashley Judd when Jackson was considering casting them. “I recall Miramax telling us they were a nightmare to work with and we should avoid them at all costs,” Jackson said, calling it a “smear campaign” against the actresses. Sorvino replied to the interview on Twitter with “There it is, confirmation that Harvey Weinstein derailed my career.”

December 19, 2017: A Page Six report claims that Weinstein attempted to coax $25 million out of Netflix to use as hush money prior to the New York Times and New Yorker‘s reports detailing his alleged sexual misconduct were published. On the same day, Observer writer and former actress Jasmine Lobe accuses Harvey Weinstein and director James Toback of sexual harassment.

February 11, 2018: Following a four-month investigation, New York state prosecutors announce that they have filed a lawsuit against The Weinstein Company for failing to protect employees from Weinstein’s alleged behavior.

March 20, 2018: The Weinstein Co. files for bankruptcy. It is later acquired by the Texas-based private-equity firm Lantern Capital.

May 25, 2018: Weinstein surrenders to New York police. He is charged with rape and separate sexual assaults against two women.

May 25, 2018: Weinstein is released on $1 million bail under the agreement that he will wear a GPS tracker and surrender his passport.

May 31, 2018: Weinstein is indicted by a New York grand jury on charges of rape and a criminal sexual act. The case—revolving around charges stemming from a 2004 and 2013 incident—is now heading to trial.

June 5, 2018: Weinstein formally pleads not guilty to the charges.

May 24, 2019: Weinstein and The Weinstein Co. board reach a reported $44 million settlement in the class action civil suit to offer compensation to alleged victims. The reported figure would change several times throughout the remainders of Weinstein’s trial.

August 26, 2019: Weinstein pleads not guilty to new indictment stemming from the remaining two cases against him.

December 11, 2019: Weinstein’s bail is increased from $1 million to $5 million following the prosecution’s claims that he tampered with his electronic ankle monitor on numerous occasions.

December 15, 2019: In an interview with the New York Post, Weinstein says he has produced “more movies directed by women and about women than any film-maker.” He laments that his “work has been forgotten.”

January 6, 2020: Hours before Weinstein appears in New York court for the start of his trial on a rape charge, Los Angeles prosecutors announce sexual assault charges against him.

February 24, 2020: After five days of deliberation, the jury finds the 67-year-old guilty of a criminal sexual act in the first degree and a third-degree rape. Specifically, Weinstein is convicted of sexually assaulting former production assistant Mimi Haleyi in 2006 and raping former actress Jessica Mann in 2013. He is acquitted of first-degree rape and two counts of predatory sexual assault, which could have carried sentences of life in jail. 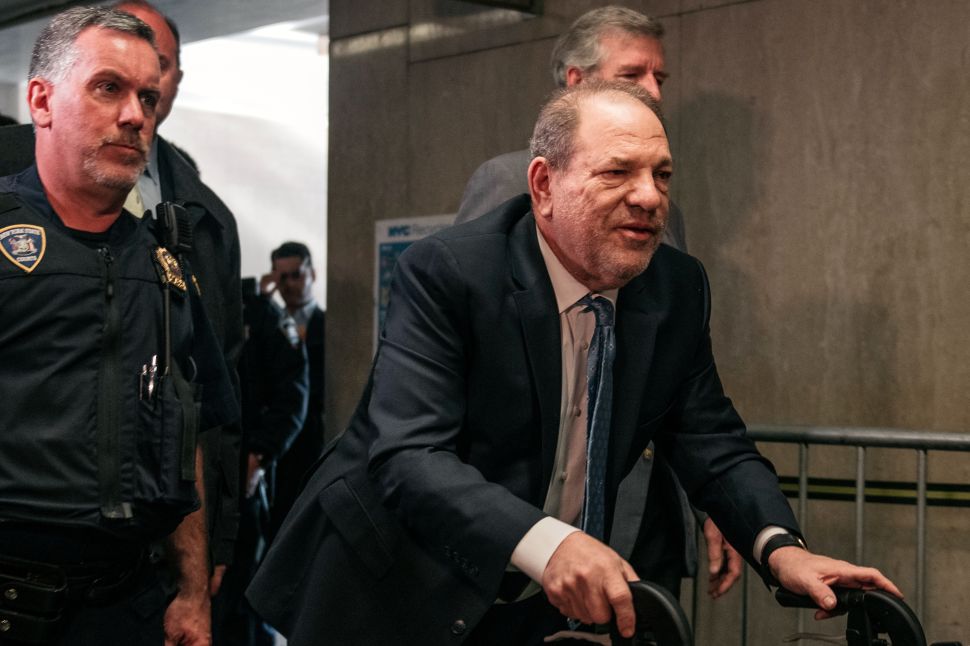