Elections are, at their cores, extremely low-tech affairs. Voters vote, and someone else tallies up and reports the results. A caucus, which is how Iowa chooses to select the delegates who then go on to party conventions this summer to choose a candidate, are even more analog: Instead of voters voting, with a pencil and paper or a punch-card, people show up to a meeting and stand around, leaving the use of tools—the pencil-pushing—to someone else.

So how did things go so horribly awry last night in Iowa, where the Iowa Democratic Party chose to dispense with the “old things that work” and instead rolled out to its 1,600 precincts an untested, $70,000 app of questionable necessity that ultimately did not function—to the point that results are still not available by midday Tuesday, and only “partial results” are promised early Tuesday evening, with the candidates already moved on to New Hampshire?

SEE ALSO: An Inside Look at the Business of Gambling on Elections

The answer’s not terribly complicated. The Iowa Democratic Party trusted an app, built in secret by a politically connected company called Shadow, Inc. that did not work, and they had no backup plan. And now, other states are already ditching plans to use technology to aid the ancient democratic process and relying on paper trails—which, according to some technology experts, is what they should have been doing anyway in the face of cybersecurity threats.

State party honchos insist, first and foremost, that there was no hacking and that there was “only” “inconsistencies” in the data sets precinct chairs were supposed to report.

NEW statement from @iowademocrats — "While the app was recording data accurately, it was reporting out only partial data. We have determined that this was due to a coding issue in the reporting system." pic.twitter.com/kOXdcvggoe

In a statement issued on Twitter on Tuesday afternoon, Shadow said that its app’s collection of precinct-level data was “sound and accurate, but our process to transmit that caucus results data generated via the app” to the state party “was not.”

Unimpressed and fully aware of how using the app might undermine confidence in the process and thus depress turnout, the Nevada State Democratic Party, which paid Shadow $58,000, announced Tuesday that it would not be using the app.

But it wasn’t just that the Iowa Democratic Party chose to use an app that was slapped together in two months and wasn’t “property tested at a statewide scale,” as The New York Times reported. Nor was it that precinct chairs didn’t get training, nor was it just that the app wasn’t even downloaded by every precinct chair, and ultimately didn’t work when the precinct chairs did—getting stuck on various steps of the process, or seeing inconsistent numbers posted when they did get through—even though all of that is true.

It was that nothing worked.

One precinct chair, who told CNN he was on hold for more than an a hour and a half, had the ignominy of being hung up on, while still on air with the network’s Wolf Blitzer.

“When you have an app that you’re sending out to 1,700 people and many of them might be newer to apps and that kind of stuff, it might have been worth doing a couple months’ worth of testing,” Sean Bagniewski, the chair of the Polk County Democratic Party, told The New York Times.

According to CNN, Democratic insiders are blaming a “major coding error” in the software for the problems. At the same time, it could have been much, much worse: Iowa Democratic Party leadership ditched an earlier plan for individuals to participate in a “virtual caucus,” in which they would “vote by phone,” over serious security concerns.

It’s also not entirely clear why the IDP chose Shadow to build its app—although there are some theories! Founded by Hillary Clinton and Barack Obama campaign veterans who have also worked for the Democratic National Committee, Shadow and its apparent parent company, called ACRONYM, appear to have much more political expertise than they do programming acumen. As CNN reported, only a handful of the team, which was apparently headquartered in a Washington, D.C. WeWork, had any significant software development experience.

We will apply the lessons learned in the future, and have already corrected the underlying technology issue. We take these issues very seriously, and are committed to improving and evolving to support the Democratic Party’s goal of modernizing its election processes.

As the Huffington Post reported, ACRONYM pitched itself to fundraisers, as well as party outposts, as a technique to bridge the supposed “digital divide” between the Democrats and President Donald Trump, who has spent more than $20 million on more than 218,000 Facebook ads. But there is a vast difference between digital advertising and digital election tools. It may be a long time before any outfit dares to experiment with the latter—which, if you are concerned about the integrity of elections, may be a very good thing.

In the meantime: Shadow appears to be hiring. 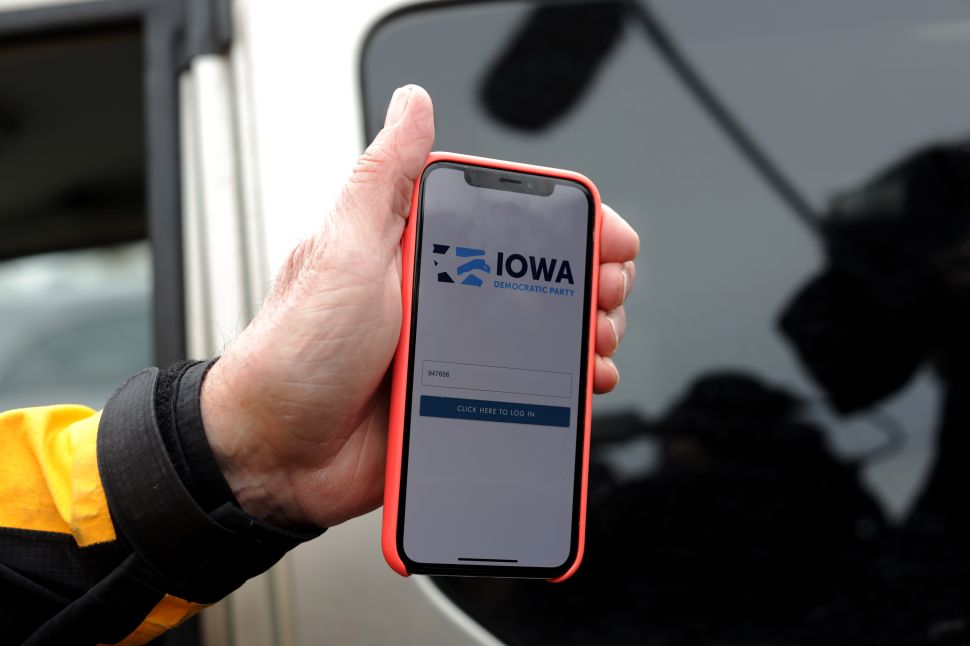