The premise of Grace and Frankie is simple: two women that were longtime family friends end up being roommates after their husbands profess their love for each other, revealing they are actually gay. The night of their ex-husbands’ bachelor party, the two women have a “yes night”—yes to any request, no matter how gonzo. Grace agrees to let Frankie do her up in dark eyeshadow with heavy eyeliner and a band tee with ripped jeans, looking like a punk rock groupie. In turn, Frankie wears Grace’s pastel pink blazer with gold jewelry strung around her neck—Grace’s standard uniform. Dressed as polar opposites, the two women go to Frankie’s favorite bar from her youth that was once known for its “dirtbag” crowd of rebellious teens.

Like both Grace and Frankie, the bar has changed with the times—now full of college kids in trendy clothing. In the dimly lit space, Frankie accuses the young adults of gentrification and “fake” dirtbaggery. In a final attempt to cheer Frankie up, Grace convinces Frankie to dance on the bar with her like she once did in her youth, which gets them both kicked out. The two stumble out into a sketchy, dark alleyway complimenting each other on how badass they are when they find out Frankie’s car has been towed. Frankie responds by ranking the night: “Grace, we got kicked out of a bar. My Leaf got towed. That immediately puts it in the top five.”

SEE ALSO: How ‘The Good Place’ Mastered the Mystery Box

The 40-year-old friendship between Jane Fonda and Lily Tomlin is what makes that undeniable chemistry possible. Two frenemies develop a sincere friendship sparked by their mutual abandonment by their husbands. True to the two actresses’ activist values, Grace and Frankie makes powerful feminist arguments against ageism and towards sex-positivity in women, both young and old. These ideas reverberate through multiple scenes like one in which Grace has an angry outburst when ignored by a grocery store cashier, “Okay, that lacked poise. And I’m sorry, but I refuse to be irrelevant.”

But its deft take on topics like feminism, ageism, sexism, homosexuality and sex-positivity makes this show far from irrelevant—and all of those topics are informed by Fonda and Tomlin’s mutually supportive sisterhood.

Fonda and Tomlin first worked together in 1980, on the set of 9 to 5, an office satire film also featuring Dolly Parton. You could say this is where the friendship blossomed. Their career as co-stars continued when Marta Kauffman (co-creator of Friends) invited the actresses to executive produce Grace and Frankie. The show’s sixth season just debuted this month while the seventh and final season is already in production. This puts Grace and Frankie in the lead to be the Netflix original series with the most total episodes when the seventh season airs in January 2021. The show makes political strides for sex-positivity and pushes against ageism through a comedic lens—like when Frankie created her own organic lube and painted an abstract vagina representation for the product’s packaging, or Grace’s invention of an elderly-friendly vibrator that is comfortable for women with arthritis.

Tomlin and Fonda’s activism also continues off-screen. They were both arrested at one of Fonda’s “Fire Drill Fridays” protests last December. The two women protest for causes they are passionate about both on- and off-camera, be it ageism in Hollywood or the deterioration of our planet through climate change. (Fonda even re-wore a gown from 2014 to the Oscars this year.) Their friendship itself, while personal and creative, feels like a political act. These women aren’t shy about their opinions and are definitely not afraid to affirm each other, even once hosting a TEDWomen talk titled, “A Hilarious Celebration of Lifelong Friendship.”

Not only do these women put their bodies on the line for causes they care about, but they use Grace and Frankie to argue for a change in our culture. Ageism in Hollywood isn’t the first thing you think of when considering problematic practices in the entertainment industry, but Fonda and Tomlin bring it to light with their show.

And they prove they do it in even in the most patriarchal of settings, like Season 6’s crossover episode with SharkTank—featuring Grace and Frankie’s newest invention, the Rise Up toilet seat for older women. The farcical nature of these lifelong friends can be summed up in one scene: Frankie is sprawled on the floor after throwing her back out, and Grace ends up lying next to her after throwing her own back out trying to get Frankie up. The scene ends with a shot of the two women stretched out on their backs on the living room floor with Grace saying, “I believe we’ve fallen and we can’t get up.”

In reality, they’ve been lifting each other up for years. Fonda and Tomlin are laying the groundwork for women of all ages, everywhere. 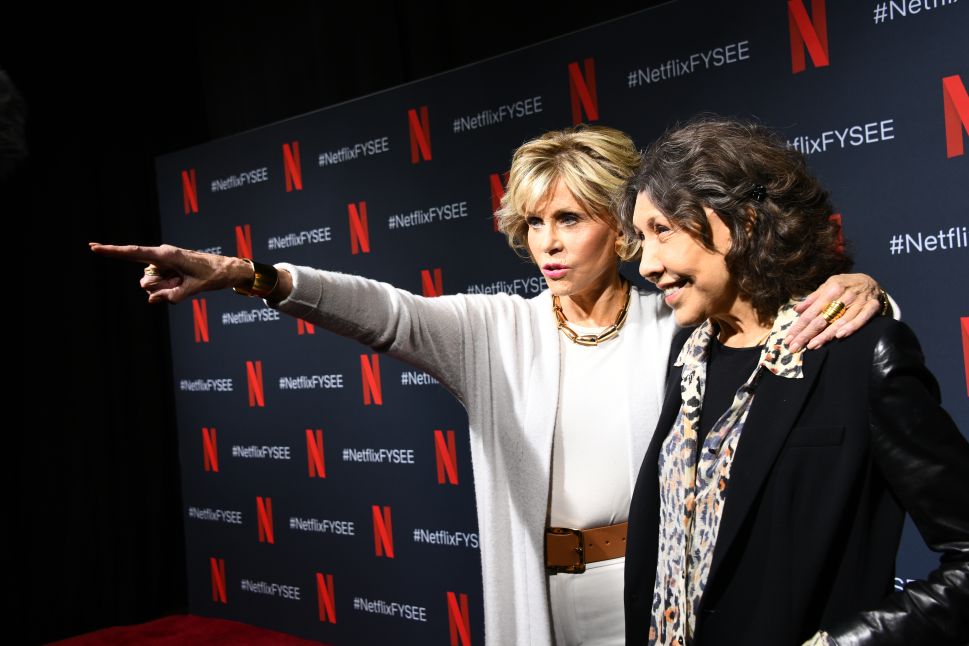