Don’t you love it when the world’s richest person becomes even richer… by the minute? Life is fair. Especially for a man, such as Jeff Bezos, who runs Amazon, a tech empire that tops the list of  some of the most evil companies.

So, what did you do last Friday? Well, for Bezos, Friday was a day in which he added a mere $8 billion to his fortune. Amazon stock jumped more than 7%, closing above $2,000, compared to the previous day when it closed at $1,870. Those figures are great news for Bezos, who owns roughly 57.5 million shares of Amazon stock, which equates to around 11% of the company.

Last Thursday, when Amazon reported earnings for the holiday quarter, it made heads explode on Wall Street (metaphorically—not literally—although, I’m sure Amazon is working on that technology). Also, during that quarter, Prime memberships surged to a new level of 150 million subscribers. The combination of good news made investors show their love and respond accordingly. During Friday’s trading, Amazon, the company that treats its warehouse employees like robots, become part of the elite group of companies with market capitalizations above $1 trillion.

It’s estimated that Bezos already has $137 billion tucked away. He was the first person to accumulate over $100 billion. (Hmmm? You think with that much money coming in, he could afford to let his Amazon warehouse employees take bathroom breaks?)

Business Insider calculates that Bezos, on average, makes $149,353 a minute.

What do you even do when you add billions on top of your billions? Do you even notice when you have that additional cash, money that will far outlive your lifetime?

Financially, last year wasn’t the best year for Bezos. Stocks dipped toward the end of 2019, and most of Bezos’ gluttonous wealth is tied up in Amazon stock. And, as part of the divorce settlement with his former wife, MacKenzie Bezos, she received 25% of the couple’s Amazon stock—which, in turn, gave her a 4% stake in the company.

But still, all the money in the world can’t prevent your cell phone from being hacked by the crown prince of Saudi Arabia. Bezos, maybe it’s time to get off of WhatsApp… 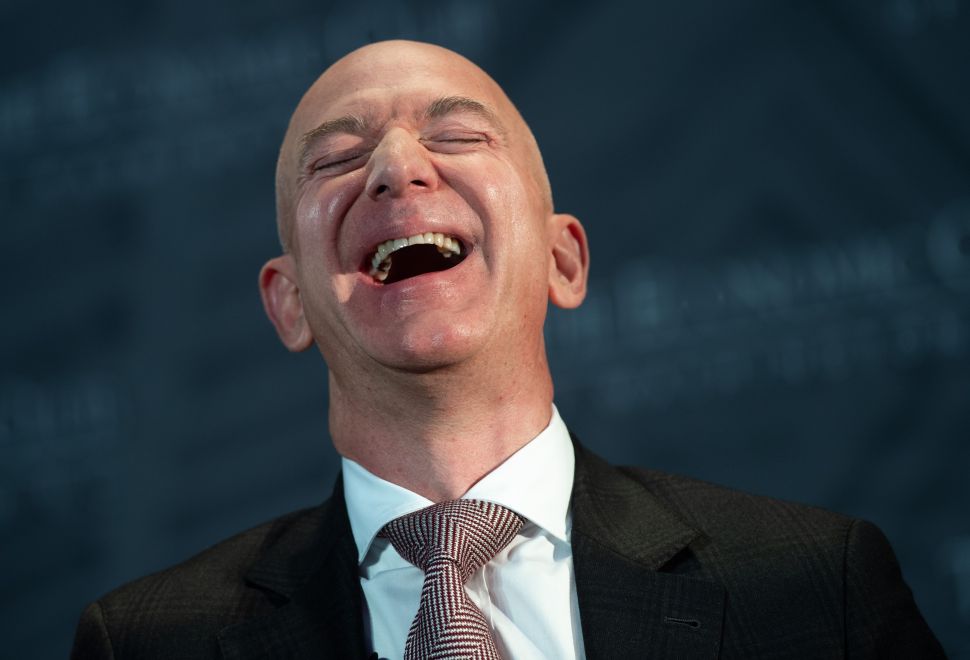