Someone once told me that Jennifer Lopez survived for years on two $1 slices of pizza per day, traveling from the Bronx to Manhattan and back again (on the 6, of course) to audition for dancing and acting gigs. They told me this was before 1991, when Lopez scored her big break as a Fly Girl dancer on In Living Color, and they said it’s always been an inspiration for them: If Jennifer Lopez can turn such humble beginnings into such blinding superstardom, surely there’s hope for all of us.

At Sunday night’s Super Bowl LIV halftime show, Lopez delivered the same thing everyone expects from her these days: performance excellence, riddled with evidence of her unwavering work ethic. Sure, she shared the stage equally with Shakira (in what amounted to an epic ode of solidarity and representation for Latinx women), but Lopez also brought out her daughter while wearing a billowing feather cape emblazoned with both the U.S. and Puerto Rican flags—all reportedly standing as one big embodiment of “the American Dream.” Throughout, there were also Lopez’s peerlessly precise choreographed dance moves, which, true to form, spanned genres, from hip-hop to salsa. For some, this would be a career apex, but for Lopez, 50, who’s gone on record saying she needs to “work harder than everyone else,” it simply felt like a grander version of her Grammy dance medleys, or maybe her Vegas residency writ large. If nothing else, it was another reminder of how far she’d come from her cheap pizza days.

And then there was that pole dancing bit. About a third of the way through her halftime performance (after Shakira had her fair share of shimmying on stage), Lopez emerged in a crystal bodysuit and climbed a stationary pole, using her uncanny musculature to spin around and even suspend herself horizontally—while singing. The song? “Waiting for Tonight,” her 1999 smash-hit single from her debut album. “I’ve dreamed of this love for so long,” she crooned, as more than 100 dancers piled around her and reached for her glistening frame.

In this moment, it was virtually impossible not to think about the stage where Lopez won’t be lauded next Sunday: Hollywood’s Dolby Theatre during the Oscars. Despite scores of Oscar pundits predicting she’d land a Supporting Actress nomination (as she did at the Golden Globes, the SAG Awards, and with multiple critics’ groups), Lopez was snubbed by the Academy for her dazzling portrayal of pole-dancing stripper Ramona in the hit film Hustlers. The performance was, again, a scorching testament to Lopez’s work ethic. For Ramona’s first scene alone (which Lopez personally insisted be as impressive as possible to establish Ramona’s queen-bee status), the actress trained for weeks with pole-dancing experts, teaching her already ultra-toned body to work the pole like a seasoned pro. The resulting scene was one of the best to hit any screen this year: a jaw-dropping, meta synergy of character and star, where pure strength and professionalism were showered with neon light and dollar bills.

And it was hardly just the dancing that made Lopez so affecting in Hustlers. Apart from her film debut as slain pop star Selena, Lopez has largely appeared in harmless romantic comedies or mediocre thrillers. And no matter her tireless skill or effectiveness in any of those movies, none can claim to have demanded great depth from the actress, let alone be the type of film that gets the Academy’s attention. There are certain actors who need a director to see something special in them, and then draw it out in full force with a role that suits their specific talents. For Charlize Theron, that director was Patty Jenkins, who cast Theron in Monster and sent her career soaring. For Lopez, that director was Lorene Scafaria, who gave Lopez a character that would call on her maternal instincts, her glamor, her athleticism, her sex appeal, her boss mentality, her vulnerability and her omnipresent New York grit—all in a single role. It delivered pathos, complexity, and raw truth never before seen in Lopez’s acting. It was the perfect Jennifer Lopez part, and the truth is, it was an opportunity Lopez might never get again.

The question on everyone’s lips, of course, is why the Academy overlooked Lopez, who, for many, seemed like the favorite to win in this category. Theories abound: Was it what the film was about? Were voters unprepared to reward a woman for playing a stripper with agency? One who doesn’t exactly have a heart of gold, but instead commits crimes, is morally ambiguous and is laden with imperfections? Crucially, was this very white institution prepared to honor a woman of color for such a role? Was it the real possibility that Kathy Bates, a surprise nominee here for the little-seen Richard Jewell, simply has more goodwill in the Academy’s acting branch than Lopez? Or was it that age-old conundrum surrounding the crossover star—one who, even with as many films under her belt as Lopez, can’t quite be taken seriously as a true actress?

The Oscars have had a complicated history with this type of performer, not to mention a bafflingly inconsistent one. Marilyn Monroe—whose do-everything career has parallels to Lopez’s—was one of the biggest stars in history, but never nominated. The same goes for Elvis. Barbra Streisand was first invited into the club—and won—for Funny Girl, but only in a historic tie with The Lion in Winter‘s Katherine Hepburn. Madonna (Evita) and Björk (Dancer in the Dark) both managed to score nominations, but the same can’t be said for Beyoncé (Dreamgirls) or Eminem (8 Mile). Cher shook up the Academy when she took home Best Actress for Moonstruck, and just last year, in her movie debut, Lady Gaga scored a nod for A Star Is Born. Naturally, none of these multi-hyphenates’ personal narratives are the same, and none of their journeys perfectly mirror that of Lopez, whose wellspring of energy, skill and ambition was always going to make her a megastar. What stings is that—from the subject matter of Hustlers to Lopez’s ethnicity—a nomination would have shown a great, much-needed openness to diversity of talent.

Last September, in a Sirius XM interview with Hoda Kotb, Lopez tearfully admitted that she was overwhelmed after reading so many glowing reviews of her performance as Ramona, many of which forecast that she might become an Oscar nominee for her efforts. “You have dreams when you’re a little girl…of being there,” she told Kotb. This quote ran through my head as Lopez spun on the pole at the Super Bowl: “I’ve dreamed of this love for so long.”

But as the screams in the stadium rose, and all eyes were fixed on this indefatigable superwoman, dreams of love from the Academy seemed utterly miniscule. And as she prepped for the next outfit change, and the next song after “Waiting for Tonight,” it was as clear as ever that Lopez is waiting for no one. 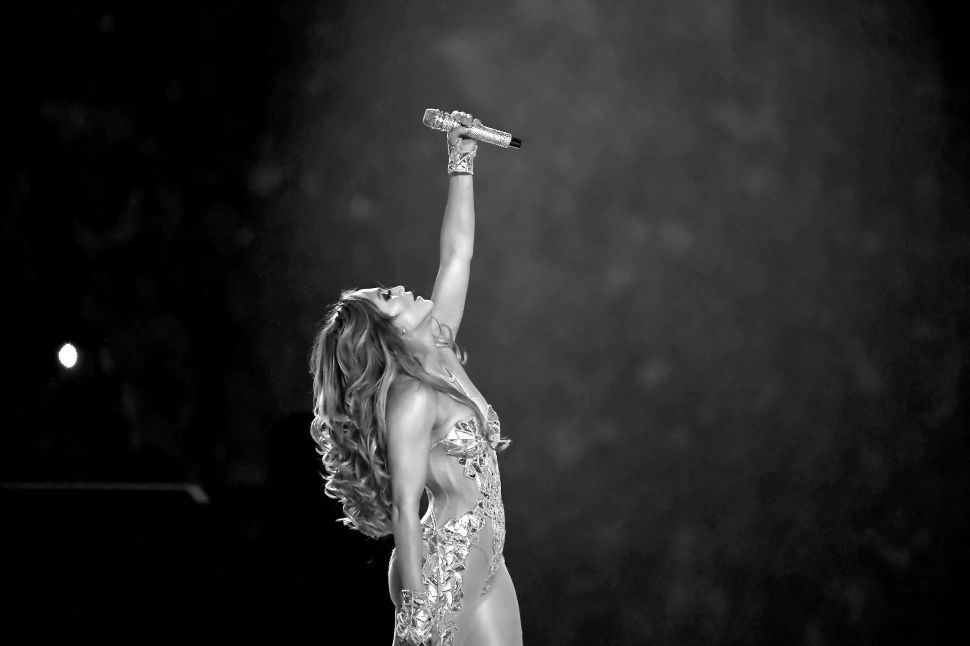