On the heels of the Brooklyn Museum’s exhibition “JR: Chronicles,” which debuted last fall and runs through May, the French documentarian JR will be unveiling a new, gigantic mural in Domino Park on Monday. It serves as a continuation of his series of broad-spectrum photographic portraits of entire cities. This new mural, entitled The Chronicles of New York, comes as a result of JR photographing over 1,000 residents of New York City from all five boroughs and bringing all these individuals together in a collage format. The epic final result will also include supplementary audio recordings that tell the story of each of the individuals featured in the Domino Park mural.

The mural, which is set to be completed over the weekend, has been in development for several weeks, and is the result of a collaboration between the artist’s studio, the Brooklyn Museum and the architectural firm LOT-EK. The backdrop for the mural is a series of 16 blue shipping containers. JR developed his reputation as one of the world’s most popular artists after spending his teenage years tagging buildings in Paris with graffiti, making him one of many successful artists to make the leap from street art to more conventionally celebrated artistic arenas.

“JR: Chronicles,” which is the artist’s first major North American show, is a mid-career survey that showcases JR’s documentation of his friends, as well as his more politically-engaged work. JR was also recently nominated for an Academy Award for the 2017 film he co-directed with the filmmaker Agnès Varda entitled Faces Places. In tandem with the Brooklyn Museum exhibition, JR has also already unveiled a series of murals throughout different parts of Brooklyn, including at Kings Theatre in Flatbush and at the Brooklyn Academy of Global Finance in Bedford Stuyvesant, indicating that his aesthetic instincts are not easily contained. 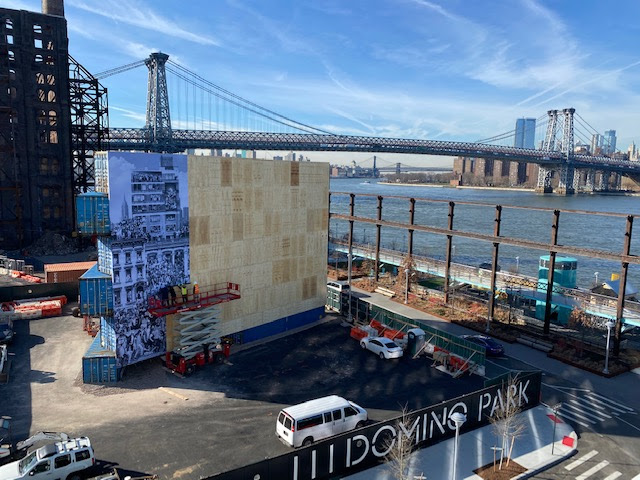