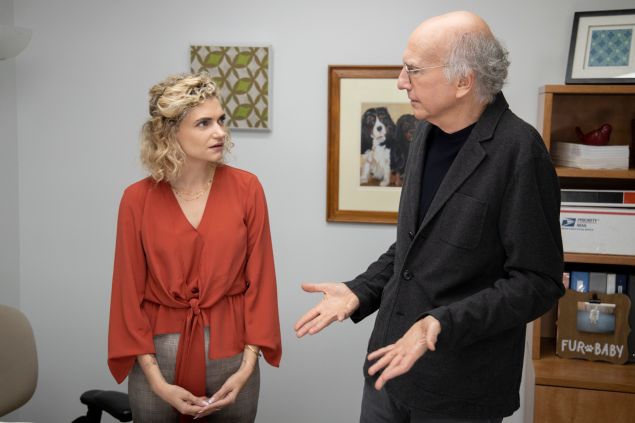 Megan Ferguson and Larry David on Curb Your Enthusiasm. HBO

This is all just a big misunderstanding.

That’s what Larry David expresses in so many words toward the end of “Happy New Year,” the first episode of the new, tenth season of Curb Your Enthusiasm, which takes place in a post-#MeToo world as Harvey Weinstein stands trial for rape. Larry’s assistant had walked into his room to talk to him about his recent problematic behavior—for example, he used her shirt to rub his eyeglasses and accidentally touched a caterer’s chest in a quest to get hors d’oeuvres—and found him dressed in a robe and MAGA hat, sitting across from his friend Jeff, whom the assistant mistakes for Weinstein.

SEE ALSO: The Unsinkable Bond of Jane Fonda and Lily Tomlin in ‘Grace and Frankie’

It’s true—Jeff may not be Weinstein, Larry was only wearing the robe because he got his clothes dirty, and as for the MAGA hat, he was only wearing it as part of an admittedly ingenious scheme to get people to leave him alone. The viewers are meant to laugh at this big fat misunderstanding—sympathize, as we usually do, with the cranky but lovable Larry David. As though it’s impossible for someone who isn’t Weinstein and doesn’t believe in MAGA to still be a gigantic asshole. 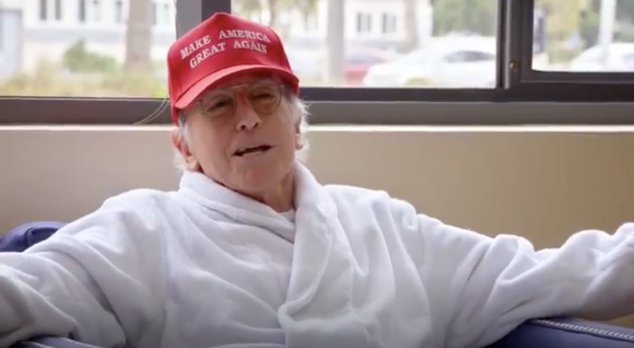 By contrasting the evil behavior of people like Weinstein and Donald Trump with the less virulent antics of Larry David, Curb minimizes the horribleness of doing things like grabbing a woman’s shirt or otherwise invading her personal space, which in turn makes the women complaining seem unreasonable. “I was lucky to get out of there,” the caterer later exaggerates to Larry’s assistant, driving home the point that not only were these women mistaken about Jeff’s identity, they must also be out of their minds.

By portraying women as hysterical here, especially in jest, Curb feeds into a popular, false stereotype that prevents women from confronting men who do things like grab their shirts, reach into their plates, and, in the new season’s second episode, hold their wrists so they can’t get away. And it’s not confined to just this one episode.

Sexism is a problem Curb has had for awhile now. We are made to yearn for the hilarious moments when Larry acts pettily—oh, how we wish we could be like him and say what was really on our minds! But Larry’s trademark impoliteness that makes Curb funny constantly comes at the expense of its female characters, the stereotypical killjoy old-balls-and-chains who have to be portrayed as unreasonable to trigger the amusing sensibilities of Larry David and his posse of bros.

Jeff’s wife Susie can be counted on for sudden angry outbursts, poshness and a desire to control everybody around her, while Jeff is reduced to the trope of the dumb husband who needs his wife to tell him what to do. Meanwhile, Larry’s now ex-wife Cheryl plays the role of the needy,  party-pooper wife.

A dog whistle to disillusioned husbands out there, the wives’ irrationality plays out most recognizably in cases where the husbands just want to play golf. In a Season 9 scene, Jeff’s golf-playing is threatened by Susie’s obnoxious demand that he drive her to the airport. In a classic scene in Season 3, Larry and Cheryl are told there will be a terrorist attack in Los Angeles, and Larry considers it an excellent opportunity to go play golf, while Cheryl is willing to die and expects Larry to do the same.

“Do you think that’s a good idea?” Cheryl asks Larry passive-aggressively when he says he wants to play golf. “It just seems like if we’re gonna go, we should go together.” The premise of Curb is supposed to be that Larry is the punchline of the joke, but in this utterly bizarre conversation as well as in many others, Cheryl is the unreasonable one.

By inventing such irrational female characters, Curb’s creators promote a sexist stereotype in order to serve as the butt of Larry’s antics. In Season 10, the sexism culminates in the portrayal of women as eager to cry sexual harassment, which is the opposite of the truth given women’s continued reluctance, even in the post-#MeToo era, to speak up about harassment.

Jeff may not be Weinstein, but the bigger misunderstanding is not the assistant’s. The much more dangerous misunderstanding belongs to whoever thought it would be funny to portray a woman whose breast Larry grabs—accidentally or not—as unreasonable. Consider my enthusiasm curbed. 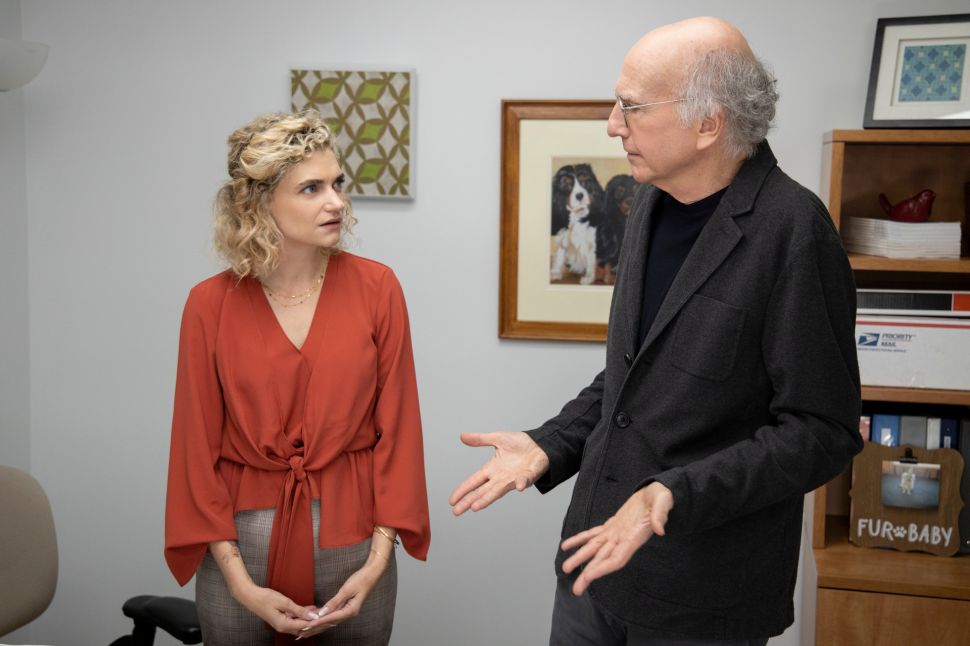