To millions of daily LinkedIn checkers, the most important piece of news on LinkedIn today is an update from the platform’s CEO Jeff Weiner himself. On Wednesday morning, Weiner announced in a blog post titled “It’s Time For My Next Play” that he would step down as LinkedIn’s chief executive on June 1 this year, ending his 11-year tenure at the helm of the career networking site.

Weiner will be replaced by LinkedIn’s current global head of product, Ryan Roslansky, as he retreats behind the scenes to serve as the company’s executive chairman, a role held by LinkedIn founder Reid Hoffman since Weiner was appointed CEO. Roslansky’s top lieutenant on the product team, Tomer Cohen, will be promoted to head of product.

SEE ALSO: How Microsoft Made the 4-Day Work Week a Successful Reality in Japan

Weiner took the helm of LinkedIn in 2008 when the company passed the $1 billion valuation mark for the first time. Under Weiner’s reign, LinkedIn doubled its private-market valuation within two years through several rounds of venture capital funding and went public in 2011. In 2017, Microsoft bought the company for $27 billion in an all-cash deal, the largest acquisition in Microsoft’s history. Today, LinkedIn has over 675 million users globally and generate $7.5 billion in annual revenue.

Weiner said he had been discussing his role transition with Microsoft CEO Satya Nadella since last summer. “While I’ve been thinking about the timing of this transition for some time, over the last year or so, several factors converged that led me to conclude now is the right time to make this change,” Weiner wrote. “For starters, our business has never been better, our culture has never been stronger… Additionally, my passion for initiatives beyond my day-to-day role as CEO has continued to grow.”

As for his “next play,” Weiner suggested that he would mirror the path of Hoffman, who is a now a prolific angel investor in Silicon Valley.

“There is no individual who has had more influence on my tenure as CEO than Reid,” Weiner wrote. “Despite his various interests outside of the company, LinkedIn has always been his top priority. Whether as a representative of LinkedIn at the highest levels, product visionary, business strategist, mentor, or advisor, his contributions have been invaluable, and LinkedIn obviously wouldn’t be where it is today without him. As LinkedIn’s new Executive Chairman, I hope to serve in much the same way.” 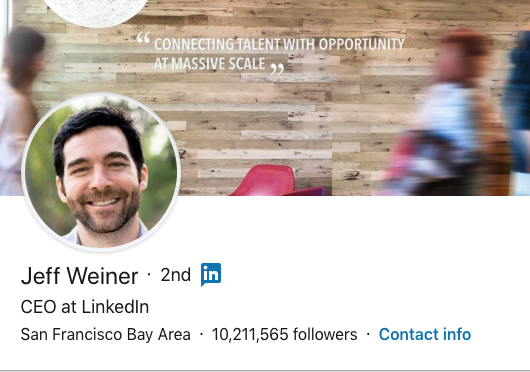