In today’s data driven world, images and numbers serve as continuous factors of gauging societal and cultural impact. The extraction of information is often quantified numerically, but self-taught artist Nate Lewis is using imagery and skillful sculpting and physical manipulation to present data in a visually engaging way. Based in New York, he uses life experiences, including his own background as a critical care nurse, to examine human existence in response to racial and political perspectives in today’s world.

He grew up in Beaver Falls, Penn., which he recalls as economically depressed. “There’s not a lot of hope there, but there’s a good community of people,” he tells Observer. The son of a black Barbadian father and a white American mother, his biracial heritage is also influential to his work. His community was diverse, but race and class dividers were still existent. Growing up, he was more into science and basketball. It was common in his small hometown for kids to fully invest themselves into sports as their life goals, with little thought of more than what a sports scholarship could provide. It was his interest in science, coupled with witnessing his father work in nursing, that led Lewis into the field. “Learning about red blood cells and atoms, that was everything for me. Science was everything.”

After earning a Bachelor’s Degree in nursing from Virginia Commonwealth University, he practiced critical-care nursing in DC-area hospitals for nine years. An interest in Capoeira, and later, boxing, led to him thinking about how intention and movement come about, and what movement through time looks like. His first artistic endeavor was learning about music through teaching himself violin, which created an understanding of the conceptuality of the vibrational frequencies of sound. Combining all of his existential influences, he began creating artwork in 2012, weaving together his experiences with diagnostic data, visual and sound patterns and photographic imagery.

Through the structural and physical manipulation of his photo montages, Lewis creates something that might be described as a human tapestry. Working with inkjet prints, Lewis sculpts straight onto the paper to reveal and extract layers, creating textures and patterning similar to cellular tissue. “It forces me to be creative within a boundary, and that’s my greatest strength as an artist,” Lewis explains. “If I can figure out how to communicate ideas the way I want to within a boundary, then when I start to expand, I’ve worn that boundary out. I’ve extracted everything I can out of it…I’m thorough with that passed boundary. I don’t want to miss anything.”

Meticulously layered patterns, texture, and distortions obscure the subjects’ identities, and the viewer is probed to dig deeper into what reveals itself to be a thorough investigation of identity and history. “Whenever I interact with images, I explore and question the history of the subject with a diagnostic lens, in my own language of seeing and listening. My textures and patterns draw from cellular tissue, but even more—from musical rhythms and sound,” Lewis says.

For “Latent Tapestries,” his first solo exhibition in New York opening March 1 at Fridman Gallery, he was inspired by the current political landscape. Activating monuments and figures from an anatomical perspective, he confronts their power and presence through his porous and penetrable sculpting, making them vulnerable and revealing the complicated, interwoven narratives that frame their existence. There is also an added jazz component—compositions by avant-garde jazz musicians Melanie Charles, Ben LaMar Gay, Kassa Overall, Matana Roberts and Luke Stewart will play during the show in a syncopated call-and-response rhythm in relationship to Lewis’ sculpted montages. 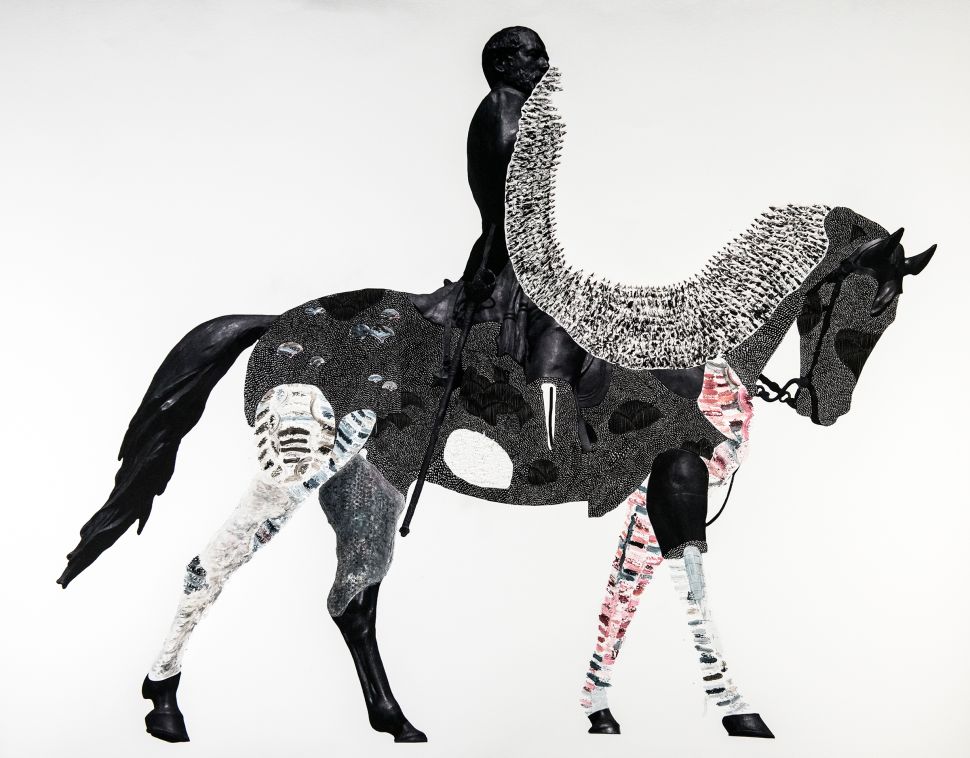