Robert Louis Stevenson’s Strange Case of Dr. Jekyll and Mr. Hyde is arguably the most famous fictitious exploration of the duality that exists within human nature. Specifically, Stevenson focuses on the presence of both good and bad in one single entity—opposing forces that are nonetheless equally true at the same time. That same duality locked within a singularity exists in Hollywood today where the very concept of originality is both a refreshing reprieve from the recycled status quo and an ill-advised departure. In Hollywood Disney’s Pixar output illustrates that conflicting duality; its latest animated kids film Onward is the first original film in quite some time.

Dating back to 2016, four of Pixar’s last five films have been sequels. Three of those follow-ups surpassed the vaunted $1 billion mark. Yet despite the grand and growing commercial totals, Pixar leadership made it clear that it would refocus on new ideas after Toy Story 4.

SEE ALSO: Jordan Peele Has “No Intention” of Making ‘Get Out 2’ for Now, Says Producer

This is notable because the very idea of originality has become fraught with risk in today’s Hollywood ecosystem while still being championed as a lost art. Onward sits at that very intersection.

Onward is set in a fantastical world of mythological creatures such as dragons and unicorns and it follows two elf brothers, voiced by Tom Holland and Chris Pratt, who embark on a quest to find a magic gem that can bring their late father back to life for one day. Despite the magical roots of this world, society has developed into a modern civilization complete with schools, day jobs, traffic and themed restaurants. The convenience of electricity and automobiles has replaced the magic of wizardry. It’s essentially Middle Earth post-industrialization and suburbanization.

Onward is a cheerful and heartwarming tale of brotherhood; it’s about cherishing those in our lives and leaning on them to survive through tragedy. Director Dan Scanlon (Monsters University) reminds us to focus on what we have rather than dwell on what we don’t. You’ll laugh often, cry frequently, and enjoy throughout. It works despite a couple lackluster trailers. Pixar can do all this while pivoting back to originals because they’ve developed the next best thing to familiar IP: brand loyalty.

As Forbes’ box office expert Scott Mendelson told Observer last year, “The Hunger Games was the last mega bucks ‘new to cinema’ franchise we’re probably ever going to see outside of already established brands.” Studios have largely retreated from new and original concepts because they are increasingly costly risks. Audiences are more willing to buy a ticket if they are familiar with the property. Pixar parent company Disney knows this thanks to a list of niche adaptations that all disappointed or failed to launch new franchises over the last 20 years (Prince of Persia, John Carter, Tomorrowland, A Wrinkle in Time, etc.). Add blockbuster misses from rival studios such as After Earth, Alita: Battle Angel and Immortal Engines to the list and a trend emerges. More often than not in the franchise era of the 21st century, newness gets you as far as a stay-at-home astronaut.

Dating back to 1995’s Toy Story, Pixar’s very first movie, the studio has developed a signature style and level of quality. Audiences know what a Pixar movie is—humor that entertains children while slyly appealing to adults and tear-jerking moments that leave you therapeutically cleansed. Onward carries on the tradition of infusing each tale with a fiber of familiarity that leaves you contented.

For the most part, Pixar doesn’t really make bad movies—give or take Cars 2 and The Good Dinosaur. They’ve won 10 Best Animated Feature Oscars in the last 17 years. The company has thoroughly established squatter’s rights on our hearts. It sounds overly simplistic, but audiences are willing to embrace a concept they’ve never seen before with their wallets when a studio or production company has already earned their trust. Decades of quality storytelling have knit a safety net for future gambles. If your favorite restaurant has an off night, it can be forgiven. But if your meal disappoints at a restaurant you’ve never been to, you’re far less likely to return.

Audiences are far more willing to go out on a limb with you when they understand your principles and products. When you’ve clearly and successfully established an identity as a content creator to familiarize fans with your brand and etched out a strategic approach and organizational expectation of quality, pivots such as these are more manageable.

Marvel Studios and Blumhouse Productions are other great examples. Both built brand affinity in different ways that enabled them to successfully launch new-to-screen content. Marvel redefined the superhero genre with Iron Man and The Avengers and was then given the leeway to experiment with less mainstream properties (Guardians of the Galaxy, Eternals, etc). Blumhouse has been a consistent purveyor of quality that adheres to strategic budgetary limits to minimize risk. They rarely make a movie for more than $5 million or so, providing low risk-high reward potential and churning out a steady stream of unique, conceptually driven features.

More simply put: if you continue to make good movies, audiences will probably show up. Jeez, Hollywood, get with the program.

Onward is a magical adventure that soothes the soul. But Pixar was only able to make it because it earned the freedom to do so. Audiences are fickle and inundated with more scripted content than ever before. Originality is still both a saving grace and a dangerous endeavor in Hollywood, but Pixar and similarly successful brands are well-equipped to handle that duality. 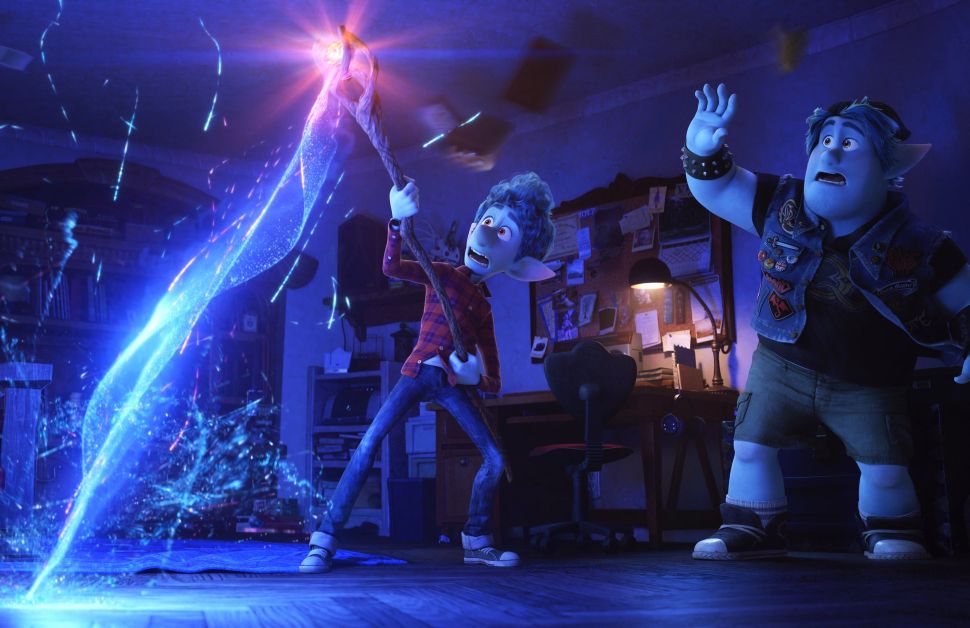