A revisionist Hollywood period piece. A mob saga. A divorce drama. A comic-book origin story. A war epic. A movie about young women, by women. A domestic curio from South Korea. A Nazi satire. And a good, old-fashioned movie about really fast cars. What does the subject matter of this year’s lineup of Oscar-nominated Best Picture nominees tell us about today’s world? The same thing it always does: That everything changes and everything stays the same.

Would a South Korean film like Parasite have secured so many nominations 10 years ago? Five years ago? Probably not. But it must comfortably remain in the company of cozy American fare like Ford v. Ferrari. Would a Little Women remake have even been attractive to studio heads before the rise of a filmmaker like Greta Gerwig? Doubtful. But while her movie has recognition in the ceremony’s biggest race, she was snubbed in the Best Director category. The Academy Awards are an annual push and pull of progress and traditionalism, handing Best Picture to Moonlight (a gay, black drama) in 2016, then giving it to Green Book (a dusty, white apologist film) two years later.

We still seem to be a long way from a time when the Oscars truly reflect the wide breadth of lived experiences of the people who watch them on TV. While we patiently wait for that time to come, here’s who we think will be going home with gold this year, in each of the 24 categories.

The “career Oscar” is one of the most frustrating inevitabilities of awards season, and recently, we’ve seen it bestowed on Leonardo DiCaprio (The Revenant) and Julianne Moore (Still Alice), both of whom seemed rewarded for their bodies of work as opposed to the work at hand. The same outcome seems all but certain for Laura Dern, whose turn as a cutthroat divorce lawyer in Marriage Story isn’t so much remarkable as it is a show of dogged consistency from the three-time nominee. Far more exciting and deserving of this honor is fresh blood Florence Pugh, the highlight of Little Women, or Scarlett Johansson, the beating heart of Jojo Rabbit. Margot Robbie’s time will come, but not for Bombshell, and Kathy Bates’s presence here for Richard Jewell feels like a bone-throw to a beloved veteran—one who undoubtedly edged out the truly deserving winner: Hustlers star Jennifer Lopez.

With respect to Brad Pitt’s full immersion into his role as stuntman Cliff Booth in Quentin Tarantino’s Once Upon a Time…in Hollywood, it’s safe to say the performance wasn’t much of a stretch for the actor. Like Pitt, Booth is the embodiment of cool—an effortlessly handsome smooth operator whose feathers can’t even be ruffled by the Manson family. Pitt deserves the win that’s coming his way, but his most important shout-out will be to QT for his spot-on casting. The only potential foil here is The Irishman‘s Joe Pesci, who, like his nominated co-star Al Pacino, showed a deft and welcome return to the mob genre. Meanwhile, everyone loves Tom Hanks, but the two-time winner will be passed over this year for playing Mr. Rogers in A Beautiful Day in the Neighborhood, as will Sir Anthony Hopkins for his role as Pope Benedict in The Two Popes.

There’s no sense betting against a sure thing, and Renée Zellweger’s work as Judy Garland in Judy seems pre-ordained for victory here. Aside from Zellweger’s actual singing and eerily spot-on mannerisms, her own career resurgence (which loosely aligns with Garland’s) will seal the envelope for her win. Charlize Theron and Cynthia Erivo are also nominated for playing real people (Megyn Kelly in Bombshell and Harriet Tubman in Harriet, respectively), but neither of their films nor personal narratives have scored enough love for an upset. Saoirse Ronan—whose nod for Little Women has made her the youngest actor in history to score four nominations—has an Oscar in her future, but not this year. And while Scarlett Johansson’s raw, formidable and achingly human work in Marriage Story is ultimately the most deserving, it still won’t be enough to derail Zellweger’s golden stroll to the podium.

Adam Driver might be the most exciting actor working today. A Juilliard-trained military vet, he’s hulking yet highly sensitive, seemingly unaware of his unconventional handsomeness, and admirably judicious about his professional choices. His shattering performance in Marriage Story should win him this trophy, but the precursor awards all point to a victory for Joaquin Phoenix, the latest actor to play the Clown Prince of Crime in Joker. Phoenix has been down this road twice before (for Walk the Line and The Master), and his chameleonic work as an unraveling vigilante is virtuoso stuff, even if it pales alongside Driver’s tormented divorcé. Anchoring the movie that boasts more nominations than any other this year (11), it’ll be enough to not only defeat Driver, but also Leonardo DiCaprio (Once Upon a Time…in Hollywood), Jonathan Pryce (The Two Popes) and even Antonio Banderas (Pain and Glory), who’s more than paid his dues to at last be recognized.

Martin Scorsese changed the landscape of American cinema. Most would agree he’s the greatest living American filmmaker. Still, his sprawling, three-hour-plus mob saga The Irishman is a tough film to get through, even if it’s clear that there’s a master at work. Quentin Tarantino, Hollywood’s enfant terrible, has also earned his reputation for uncompromising mastery, and Once Upon a Time…in Hollywood is his most personal film to date, despite the controversies it wrought. Joker helmer Todd Phillips is the new kid here, and while many claim he co-opted stylistic and thematic touches from Scorsese’s earlier work, he’s being handsomely acknowledged for graduating from The Hangover to a richly dark commentary on society’s ills. With Parasite, Bong Joon Ho cemented himself as a dizzyingly versatile director, navigating a genre-defying class satire through every imaginable emotion and an array of crisp visuals. But none of these men seem poised to topple a win for Sam Mendes, whose wildly ambitious 1917 turns the simple conceit of a rescue mission into that rare thing: a singular war film for the ages.

Given how utterly beholden Hollywood has become to the superhero genre, it’s heartening that the Academy didn’t cave and give a Best Picture nod to Marvel’s juggernaut finale Avengers: Endgame. Still, the movie that did rack up the most nominations this year is Joker, a pseudo-spin-off of said genre that just happens to carry a bit more prestige and real-world resonance. Does that mean it will exit stage left with the top prize? Probably not. If the precursor awards are any indication, this race comes down to the WWI epic 1917, Quentin Tarantino’s bloody Tinseltown valentine Once Upon a Time…in Hollywood and Bong Joon Ho’s South Korean masterpiece Parasite. Some might feel that Scorsese still has a dog in the fight with The Irishman, but it’s hard to imagine enough people loving that film to place it at number one on their ballots. The same goes for Jojo Rabbit, Little Women, Ford v. Ferrari, and, sadly, Marriage Story. A perfect film that manages to be thriller, comedy, drama, satire, horror flick, romance, and coming-of-age tale all at once, Parasite is unquestionably the movie of the year. But as it gets relegated to settling for Best International Film, the path is cleared for 1917, a perfectly-timed, late-blooming tour de force that wows viewers with its single-take wizardry while yanking at their heartstrings.

Those are the major categories. Here’s how the rest of the field will shake out…

Will Win: Once Upon a Time…in Hollywood
Could Win: Parasite
Should Win: Marriage Story

Will Win: Toy Story 4
Could Win: Missing Link
Should Win: I Lost My Body

Will Win: American Factory
Could Win: For Sama
Should Win: The Cave

Will Win: Brotherhood
Could Win: The Neighbors’ Window
Should Win: Nefta Football Club

For a refresher, see our full list of this year’s Oscar-nominated films. 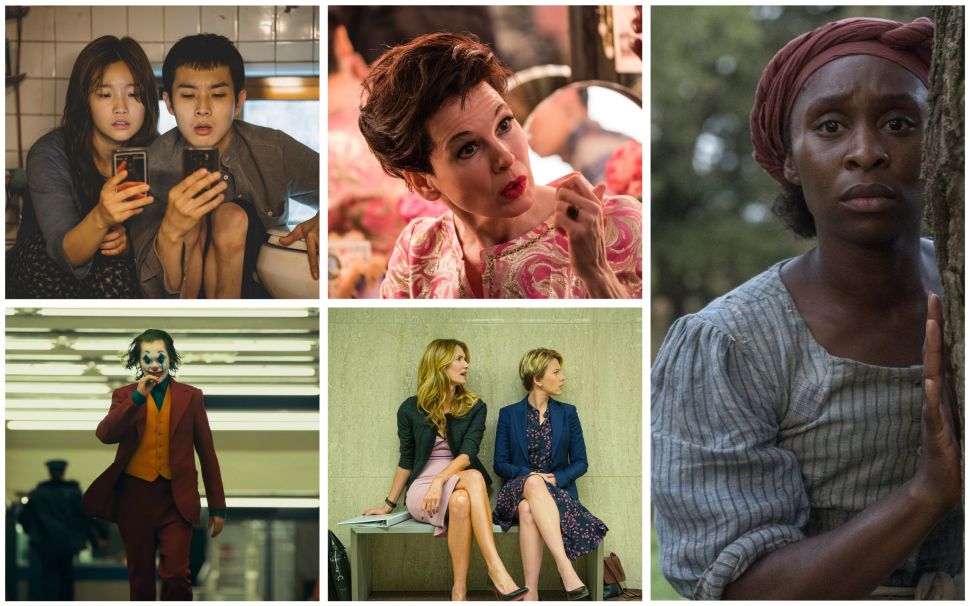