This year marks the 500th anniversary of the death of the Renaissance artist Raphael of Urbino. Despite the passing of half a millennium, Raphael’s legacy influences our conception of good art to this day.

“Raphael’s art, more than that of any other artist, determined the standards of ideal beauty, “good” composition, and systematic drawing until the triumph of the avant-garde in the second half of the nineteenth century,” says Jonathan Bober, curator at the National Gallery of Art in Washington, D.C. “In turn, it lay the foundation for art academies and taste, at least at one end of the aesthetic spectrum, that persist to this day.”

Bober is curating NGA’s celebration of Raphael’s talent with a show titled “Raphael and His Circle,” focusing on the effect of Raphael’s style on his milieu and beyond. Major institutions around the globe are presenting similar programming that examines the master’s life and context.

“Raphael and His Circle” leverages the NGA’s superior collection of works by its eponymous subject (Bober states they have the “most important” Raphaels outside Europe). Focusing on works within NGA’s collection avoids the complex legal squabbles that often result from transporting artifacts steeped in history and cultural heritage from one institution to another.

The drawings and paintings that NGA has on view track the spread of Raphael’s influence on the production of painting across Europe, as well as the expectations of the viewers and patrons consuming it.

“Probably more than any artist of comparable genius and influence, Raphael approached style and even his own stylistic evolution in rational, systematic fashion. That meant that he was exceptionally responsive to other styles, from that of his teacher Perugino, through Leonardo, Michelangelo, and eventually even aspects of contemporary Venetian painting,” says Bober.

The show’s laser-focus on Raphael, as such, highlights the secret to his centuries-spanning success. Raphael’s famed Madonnas, his Sistine works, his frescos across the Vatican more broadly, are all the result of an innate ability to reverse-engineer the work of other artists and bring those lessons within his skill set.

Add to that a capacity for charm, and it is little wonder why this wunderkind took Rome by storm. By the time Raphael died at the age of 37 (from too much sex, according to the father of art history, Giorgio Vasari) he was one of the most powerful and sought after artists in Christendom.

The Prophets Hosea and Jonah from 1510—one of the drawings on view in the NGA show—presents Raphael’s capacity for mastering the talents of others.

“It is a very advanced compositional study, and really the single most important of the Gallery’s five drawings by Raphael,” says Bober, “In fact, the enormous volume and imposing presence of the figures represent an early response to Michelangelo.”

Raphael and Michelangelo feuded throughout their lives over how liberally the former quoted the latter. Michelangelo’s visionary painterly style (later called Mannerism) was a major influence on Raphael and is evidenced in early masterpieces including the Prophet Isaiah at Sant’Agostino in Rome and the Fire in the Borgo in the Vatican.

Raphael’s smoldering rivalry with Michelangelo was all but an anomaly. He was a precocious master whose influence lives on, in the hallowed halls of the National Gallery of Art and beyond.

Raphael and His Circle opens at the National Gallery of Art on February 16 and runs through June 14, 2020. The show’s hashtag, according to NGA’s website, is #Raphael500. 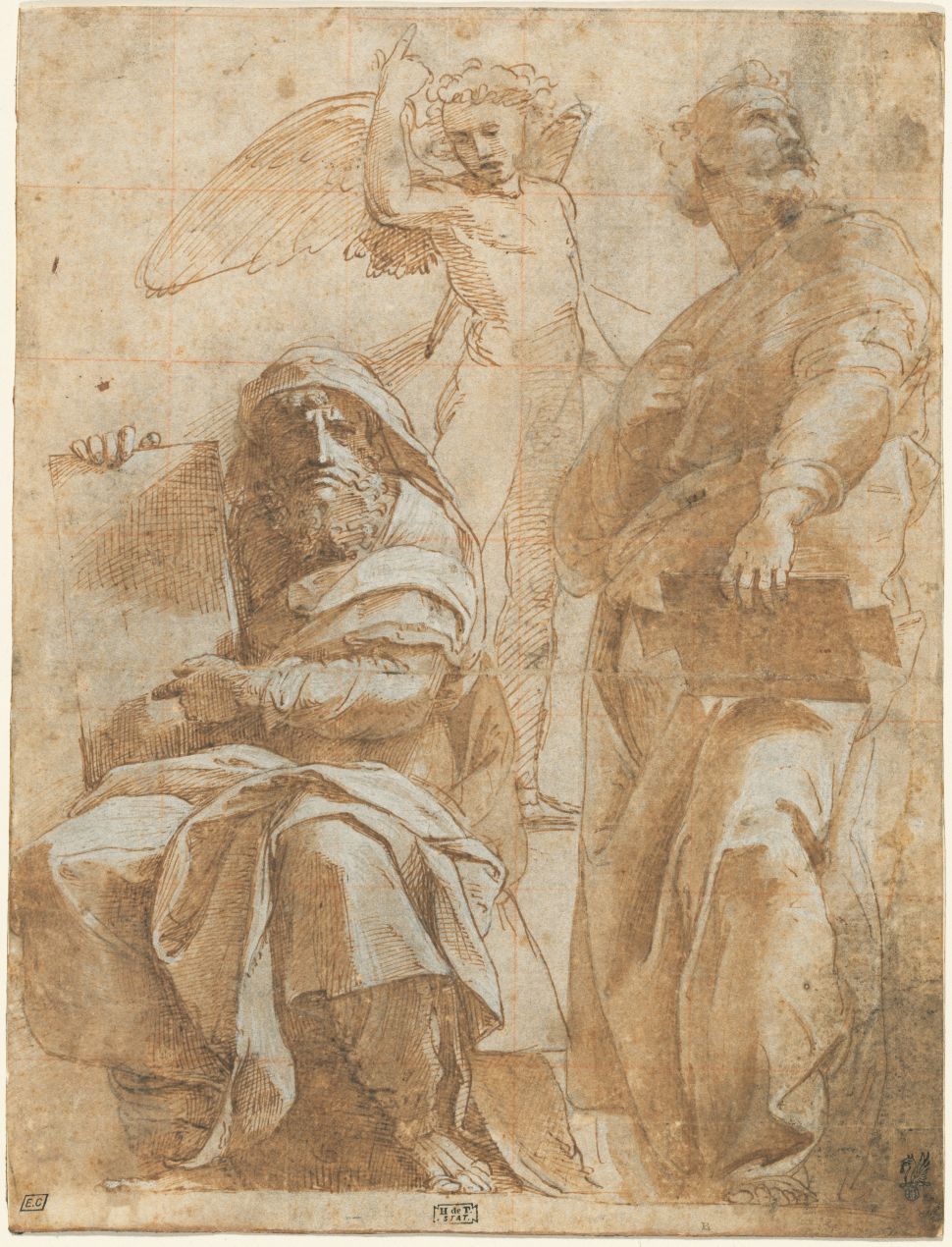