Theater lovers collect Lears, Medeas and Blanches DuBois the way others accumulate random matchbooks or Apple earbuds. The Great Roles are routinely assayed over the years, and one stuffs the memory of them in a miscellaneous drawer thinking that they might be useful one day. Critics keep lord knows how many Hamlets in that drawer: some live, some on film or via NT Live. I’ve just acquired a new melancholy Dane that is so fresh, aching and aflame with life, I want to savor it before squirreling it away. At St. Ann’s Warehouse, Ethiopian-Irish actress Ruth Negga (AMC’s Preacher) captures an essential quality so many other Hamlets have lacked: adolescent impetuosity. Negga’s sly, shy, but ardent prince feels everything too deeply and responds too sharply; he changes identity and beliefs with a speed that seems callow, but is true to the hormonal churn of being young, gifted, and heroic.

A 38-year-old woman, Negga presents as a young man at least 20 years younger, an unforced transformation helped by her short-cropped hair, delicate features, and compact frame in a tight-fitting suit. Personally, I’ve long wanted to see a teenage Hamlet—as well as a chubby and a balding one. I’ve seen Simon Russell Beale and Paul Giamatti do the role, so those itches are scratched. Negga may look like she stepped out of a boy band, but has deep physical and emotional resources and charisma by the bucketful. Hamlet makes himself cry at the emo genius of his “What a piece of work is a man” speech; he shrinks and seethes like a resentful kid every time his uncle Claudius (Owen Roe) bullyingly grabs the nape of his neck; when the dreamy revenger locks lips with a tremulous, awkward Ophelia (Aoife Duffin) you wonder if you walked into a Romeo and Juliet by mistake.

This is a thinking Hamlet, too—as you expect (has anyone done Jock Hamlet?)—and Negga’s cunning, self-amused performance, combined with superb verse delivery, finds fresh urgency and clarity in the famous soliloquies, even with an edge of same-sex flirtation when Hamlet sprawls seductively in a plush chair and toys with school chums Rosencrantz and Guildenstern. Finally, there’s the racial subtext of this modern-ish production, from Gate Theatre Dublin and staged by South African director Yaël Farber: Hamlet is the only person of color on stage—apart from the ghost of his murdered father, the king (Steve Hartland). Isolated thus, assassinated monarch and avenging son may seem to be taking on a white (Irish) establishment.

All we need next is a uniformly great ensemble and brilliant design and directing for me to declare this the best Hamlet you may ever see. But I’m afraid that Negga outshines an otherwise adequate supporting cast, with direction that’s evocative but not revelatory. Roe’s Claudius, a hoarse, red-faced military type in jackboots, is your usual fascist take on the villain. Fiona Bell is decent but fails to make more of Gertrude, a central but often thankless role. I’m always eager to see what a director will do with the “Ophelia Problem”—how to give this purely reactive and tragic female role more agency and depth. Duffin’s solution is to signal neurotic misery from years of emotional abuse at the hands of slimy Polonius (Nick Dunning). And Mark Huberman’s stalwart Horatio is the most peripheral and de-emphasized I think I’ve ever seen. Hamlet’s best buddy practically melts into the black-painted walls of doors designed by Susan Hilferty. One of the more unfortunate cuts in the script (which still comes in at three and a half hours) is the tender death parting of Hamlet and Horatio.

For all these performance reservations, Farber’s production moves along swiftly and engagingly, using both stage and audience seating in inventive ways. There are glimmers of directorial invention early on—Hamlet’s “O, that this too, too solid flesh” lament, usually played in isolation, is partly confided to Ophelia. A Hamlet where all the soliloquies are public? Bring it on. But the idea is dropped after that scene. Other flourishes were better left in rehearsal. The splendidly creepy scene between our hero and his father’s ghost is played behind a giant semi-translucent sheet of plastic, with fog billowing beneath (be ready for lots of fog and incense over the course of the night). For a few seconds, this undulating membrane is evocative and neat…then it just seems a huge waste of Saran Wrap.

Still, it’s a testament to the force and grace of Negga’s prodigious prince that, days later, I’m Fantasy Footballing her into a different company. Michael Shannon’s Claudius? Check. Toni Collette as Gertrude? Yass! Zendaya as Ophelia? Why not! The world probably gets a new Hamlet every 3.5 minutes; but rarely one with “that unmatched form and feature of blown youth,” as Ophelia sighs. And we, like besotted schoolkids, sigh with her. 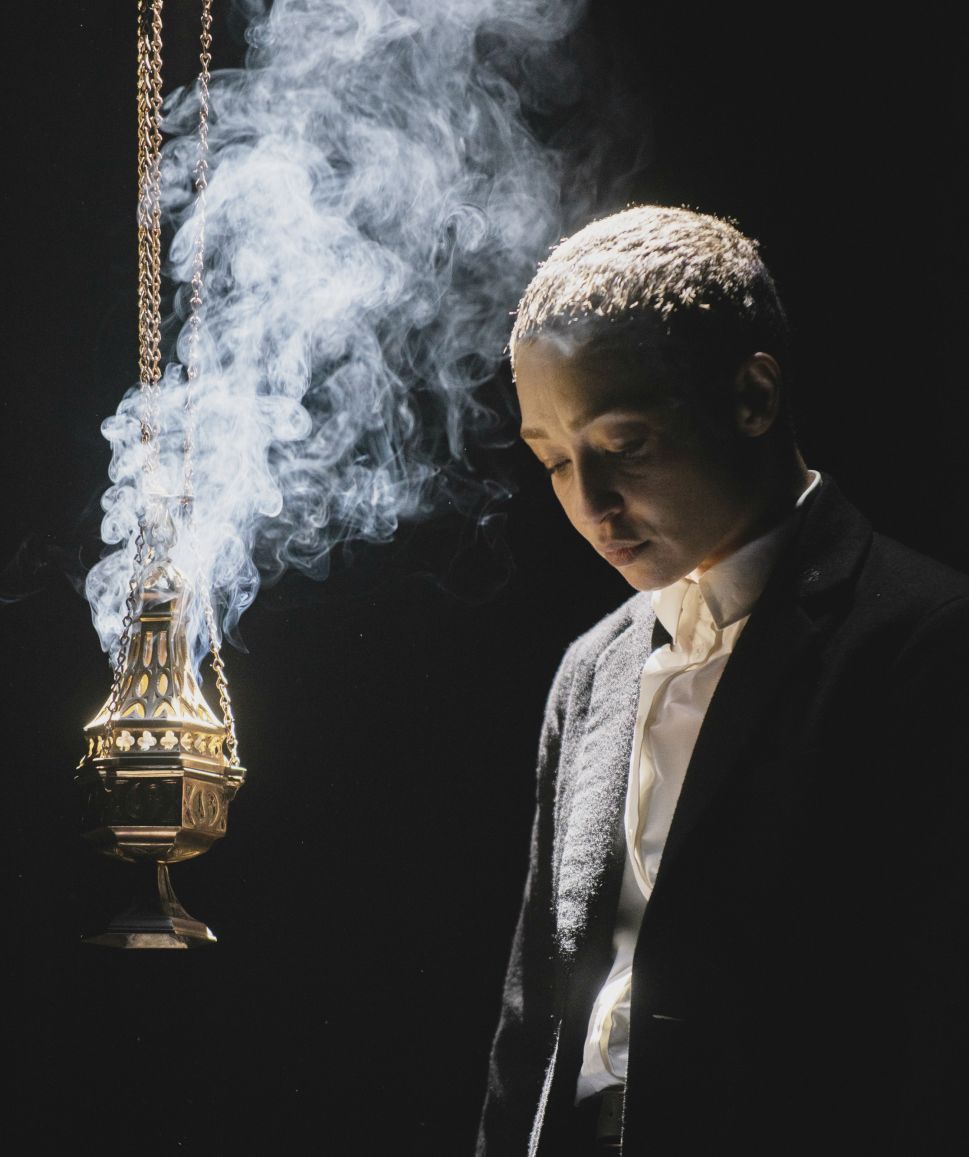