Throughout February, three minutes before midnight, Times Square’s lustrous billboards will shift from their garish hues, making way for a subtler, yet captivating moment of reflection. Tourists in search of a selfie angle and locals rapidly crossing between Hell’s Kitchen and Midtown encounter the question, “Who are you?” populating the screens in a whimsical font that recalls the innocence and arbitrariness of a child’s handwriting.

Shantell Martin, the artist behind the video installation, believes that’s a question we should ask ourselves regularly. “Every day,” in fact. “I believe we all should [ask that]—there’s a benefit calibrating one’s self regularly.”

SEE ALSO: YAn Artist Meets the Thief Who Stole Her Work in an Astonishing New Documentary

In a plaza otherwise saturated with gushes of tourists and visual stimuli so overwhelming it almost seems counterproductive, Martin’s intervention offers a moment of escape and contemplation. Titled Lines of Mars, the three-minute video composed of words, stick figures and other simple figurative drawings is a part of Time Square Arts’ initiative to find some space on the square’s radiating signs for something other than advertising: for art. The monthly program, called Midnight Moment, has brought works by Nick Cave, Laurie Anderson, Pipilotti Rist and Christian Marclay into the center of a site decidedly on the other side of the cultural spectrum from “high art.” But Martin could be considered a figure who easily slides between these demarcations.

Since moving to New York over a decade ago, the British-born artist has carved herself a creative niche using an accessible but deeply sentimental visual lexicon. From three collaborations with Puma for sneaker design to a video she shot with Kendrick Lamar for Art Miami Basel Beach and the a mural she painted for Italian restaurant Saraghina in Brooklyn, the thirty-nine-year-old’s drawings continue to attract a wide-ranging audience. In the meantime, institutional recognition has snowballed as well, with a solo exhibition at 92Y’s Milton J. Weill Art Gallery in 2018 as the first visual resident, in addition to group shows at Denver Art Museum, Albright-Knox Gallery and the Museum of the Moving Image.

Martin cites cartoons as her biggest inspiration, growing up without exposure to museums or galleries. “We can all make a line, but imagine all the work that goes into making a line recognizably yours,” she explains to Observer about creating the black and white dashed style that has become so thoroughly hers. Whether on Times Square billboards or a pair of sneakers, Martin’s figures find ways to convey empowerment and the possibility of self-realization. She uses words, punctuation marks or stick figures to illustrate questions or suggestions about ways of being. In Times Square, her art yet again finds a new meaning through the billboards’ colossal scale—where encountering art is less than expected. The familiarity and connectivity of her simple gestures stand out amidst a flood of images notoriously dense with colors, faces and words. She calls her offer, “simply art, without having to sell it as such.”

The motivation behind much of her aesthetic came from a realization that many people say they can’t draw. “Everyone can draw a stick figure, a face, or other familiar things,” she says. “Not all people should make it a career, but everyone is an artist, unique and worthy of being seen and heard.”

And it’s that message that’s at the heart of her Times Square presentation. Throughout Martin’s three minutes, you watch as her question slides across the billboards to slowly converge into the sentences “you are who,” or “you are who you are.” Martin will continue to celebrate inner probing as well as loving self-acceptance in her next projects. Collaborating with digital art gallery Absolut Art, Martin will create limited edition prints to benefit LGBTQ+ communities during Sydney’s Gay and Lesbian Mardi Gras, Art on Paper art fair, as well as the New York and Stockholm pride parades. 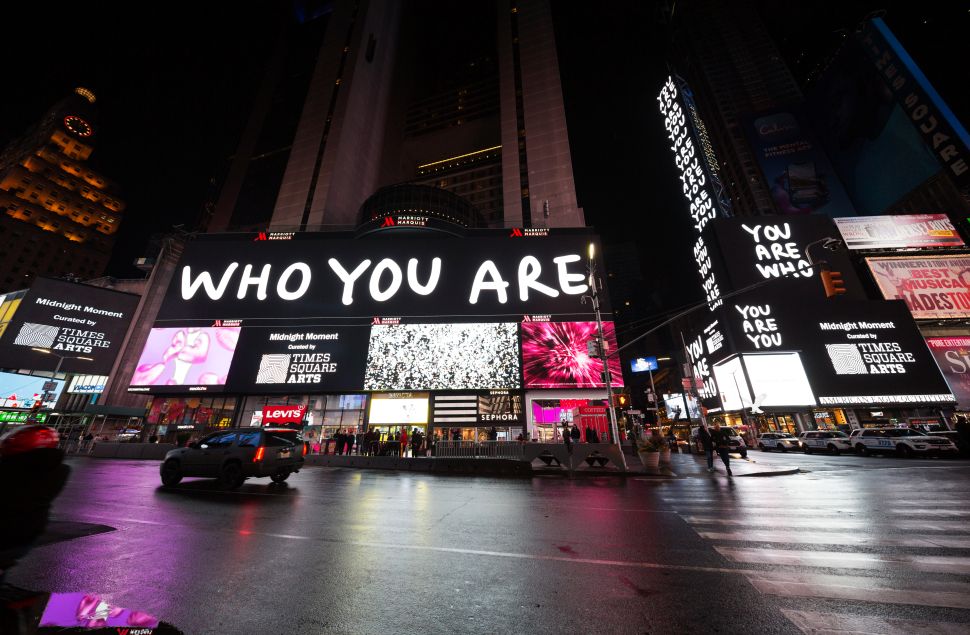