To understand where we’re going, we need to know where we’ve been. Knowledge of the past, whether it’s rooted in success or failure, illuminates the uncertain future. Such is life. Strangely, that same grand wisdom applies to the difficult navigation of entertainment’s most dearly regarded property: Star Wars.

The vicissitude of a galaxy far, far away is well known by all—impossible groundbreaking highs, childhood-ruining lows and everything in between. This week, another slate of Star Wars content will be unveiled for audiences to judge, analyze and evaluate. With the long-awaited new seventh season of the animated series Star Wars: The Clone Wars (which originally aired from 2008 to 2013) arriving on Disney+ February 21, fans will travel back in time once more but also potentially glimpse the future possibilities of Star Wars.

SEE ALSO: Inside Ski Comedy ‘Downhill’ With the Stars, Writers and Directors

But before we make the hyperjump into what lies ahead in the franchise, we first need to revisit The Clone Wars‘ immense value to the franchise’s past. Every new addition to Star Wars lore has been treated as sacrosanct by some corners of the fandom. Yet The Clone Wars, along with the later animated series Star Wars: Rebels, is the saving grace of the much-derided prequel era. Though recent revisionist history has cast George Lucas’ prequel trilogy in a gentler light, the reality is that the film series left many fans disappointed and deflated. But The Clone Wars impressively fleshed out existing characters while also introducing beloved new characters and humanizing previously nondescript red shirt cannon fodder. It wasn’t a perfect piece of entertainment—the 20-plus episode seasons had plenty of filler—but it was damn close.

“I think Star Wars: The Clone Wars is a testament to the imaginative nature of Star Wars itself to such a degree that it proves one premise cannot contain the concept of Star Wars,” Jason Ward, founder and editor-in-chief of Making Star Wars, told Observer. “Star Wars is like the proton torpedo gliding along the trench into the reactor of the Death Star. Every story is a chain reaction that leads to exponential growth in terms of dreams and new fans.”

The greatest beneficiary of The Clone Wars is indisputably Anakin Skywalker; the animated series rounded out his character considerably. He still struggles with anger, questions the authority of the Jedi Council, and exhibits darkness when going to extreme measures, but his heroism and warmth are equally apparent defining traits. His genuine friendships with Obi-Wan Kenobi and his newly introduced padawan Ahsoka Tano, who has grown into one of the most beloved characters in all of Star Wars, grounds him with real and tangible emotional connections. They show us the complete character rather than merely tell us.

It’s not just that Anakin’s character is more likable in The Clone Wars, it’s that he’s more understandable (the same can be said for several live-action characters that appear). His motivations and choices, both good and bad, make sense within the context of the narrative (see: Season 2’s “The Zillo Beast”) rather than push him to a predetermined point like the prequels. This also makes the psychological fallout of his turn to the Dark Side and betrayal of former allies all the more soul crushing. We actually, you know, enjoyed their relationships!

The emotional character development of Anakin, Obi-Wan and Ahsoka; the actualization of clone troopers as singular individuals rather than faceless casualties (see: Season 1’s “Rookies”); the nitty-gritty plot progression of the fabled Clone Wars (which the prequels don’t actually explore all that much); and the visual aesthetic all mark a high point in prequel era storytelling that has enjoyed far-reaching implications for Lucasfilm.

Dave Filoni created both The Clone Wars and Rebels. Lucasfilm has been grooming him for a larger role by putting him through a live-action directorial boot camp and having him helm episodes of Disney+’s hit series The Mandalorian. According to The Hollywood Reporter, Filoni, Jon Favreau and Lucasfilm senior VP live-action development and production Michelle Rejwan will have “a lot of say over the future of Star Wars.“

Filoni managed to imbue his tale with his unique idiosyncrasies and personality while maintaining its mass appeal and inherent Star Wars-yness. The Lucasfilm story group is notoriously watchful, and yet Filoni’s output has been refreshingly balanced between corporate mandates and independent flourishes (see: Season 5’s “Ahoska’s Exit”). Elevating him to a story direction level to provide a guiding vision for Star Wars à la Marvel’s Kevin Feige makes a certain amount of sense.

“When The Clone Wars began, no one expected that Dave Filoni, George Lucas’s hand-picked protégé, would become one of the most important creative minds in Star Wars, but, in retrospect, why didn’t we?” Bryan Young, a writer, filmmaker, and journalist who contributes to StarWars.com, told Observer.

He continued: “He knows the lore better than anyone and his contributions to the lore of Star Wars have changed everything we thought we knew. He’s had his hand in some of the most popular characters that were never seen on the big screen and fans have an unprecedented level of trust in him.”

Reviewing The Clone Wars, it’s clear that the long-form narrative of television enabled deeper character development and investment that expanded on both the artistic design of the films as well as its storytelling angles. This is the strategy Disney appears to be embracing as several Disney+ Star Wars shows are in development and the features set in a galaxy far, far away remain on a temporary hiatus. The Boba Fett standalone picture was reimagined as The Mandalorian, which will premiere its second season in October. The long-gestating Obi-Wan Kenobi spinoff was retrofitted into its own Disney+ series (though it is now facing delays). Diego Luna’s character from Rogue One is also getting his own series set to begin filming this year. As The Clone Wars did, Lucasfilm is borrowing the best elements from the big screen and redesigning them for the small.

The Clone Wars also plays around with our understanding of power in this universe. “The Nightsister Trilogy” and “The Mortis Trilogy” from Season 3 introduce fascinating new wrinkles of the Force into the canon, elements that carried over into Rebels and were indirectly touched upon in Disney’s sequel trilogy.

More specifically, there are numerous storylines that Season 7 can (and in some cases will) pick up on to pave the way ahead. Rebels fan favorite Kanan Jarrus, a Jedi who trains protagonist Ezra Bridger, is briefly seen standing next to Jedi Master Depa Bilaba (a character featured on the Jedi Council in The Phantom Menace) as a young padawan in the Season 7 trailer. We know from supplementary comics that Depa is killed in front of Kanan during Order 66, which re-positions Rebels as a sequel series to Clone Wars in a roundabout way.

Giancarlo Esposito’s Moff Gideon emerges as the big bad of The Mandalorian late in Season 1. He’s seen wielding the Mandalorian Darksaber, which is a symbol of renowned power to that tribe (and a popular plot device in The Clone Wars). Season 7 may feature Gideon’s first encounter with the weapon as it has been confirmed that the new episodes will cover the Siege of Mandalore. This could provide more interconnected storytelling between the franchise’s various series.

The trailer also showcases Darth Maul, who has become one of the most popular prequel-era characters thanks to a retcon that saw him survive his battle with Obi-Wan in The Phantom Menace. While we know he survives through Rebels, which takes place roughly 15 years after The Clone Wars, we don’t know how he loses his power over Mandalore nor how he comes to lead the crime syndicate Crimson Dawn, as seen in Solo: A Star Wars Story. Rumors abound that a Crimson Dawn Disney+ series is being discussed at Lucasfilm, though that remains unconfirmed. If true, what an opportune moment to set that show up.

A lot of untapped potential for the galaxy far, far away

Future films and series in the Star Wars universe can tackle any of this material, as well as address the unanswered questions from the Rebels finale, in which Sabine Wren and Ahsoka head off into the Unknown Regions to search for a missing Ezra Bridger and Grand Admiral Thrawn. (Thrawn, a popular Legends character, was formally introduced into the canon via a 2017-2019 book trilogy and a crucial role on Rebels. In May, he’ll return in the first book of a new prequel trilogy rather than an expected sequel, which suggests that Lucasfilm is planning to use him on screen in some capacity going forward).

“The Star Wars films, the animated shows, the comics, all of it opens up to unlimited potential,” Ward said. “While The Clone Wars itself may wrap up this year, we will see more of it someday. This is already The Clone Wars’ third iteration, and I doubt it will the last in the big picture.”

There is endless space to cover, much of it set up by The Clone Wars and its creative directions that express words of thought and mine richly textured history to produce arguably the most consistently enjoyable Star Wars tale of all. Even if upcoming stories aren’t directly connected to the beloved television show, Filoni’s understanding of character, fan service, plot progression, and artful delivery should carry over into tales. The Clone Wars may be a relic of the past, but it remains the best argument in favor of the future of Star Wars. 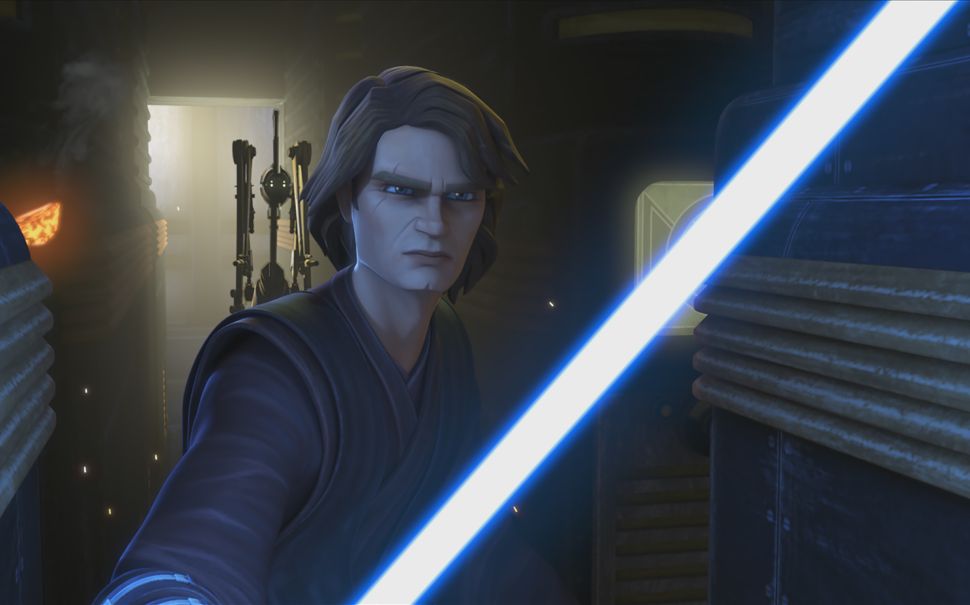