It’s the first Super Bowl for Kansas City in 50 years. San Francisco is trying to win its first since Bill Clinton was president. But these aren’t the most compelling chronicles of Super Bowl LIV. Nor are the commercials or the halftime show the main attraction.

In fact, the biggest story of the big game may be the food: an American food festival with international flavor. And as Centerplate reveals, there’s also a lot of social causes and communities benefitting as well.

1. The First Female Chef in Charge of a Super Bowl

For the first time in history, a woman is leading the food preparation. It’s Centerplate’s executive chef Dayanny de la Cruz, whose story is as interesting as the food offerings available.

As a little girl from the tiny town of Nagua in the Dominican Republic, learning how to cook from her grandmothers, she probably never expected to take center stage at the biggest sporting night in America. But her hard work and determination helped her hone her craft in school in Grand Rapids, Michigan, then cook for patrons at the Doubletree Hotel.

Now, “Chef D” has a long resume of managing meals—from the NFL, college football, tennis and professional basketball to the U.S. Open tennis tournament and the Kentucky Derby.

2. The Super Bowl Is an International Event and the Food Reflects It

When the first few Super Bowls were played, you probably saw lots of hamburgers, hot dogs, fries and soda. But it’s no longer an AFL-NFL exhibition played at Tulane or Rice University. At Super Bowl 54 in Miami, you’ll find Centerplate’s menu has seafood paella from Spain, French macarons (the cookie, not the president), Argentinian asado, Mexican empanadas, as well as Cubano sausage, tuna tartare and ceviche, a dish popular in Peru.

But don’t think the good old U.S. is going to be stuck on the sidelines. In addition to BBQ pulled pork and Florida avocados, there will be watermelon salads, Maine lobster, thousands of ribs, beef tenderloin and, of course, more than 10,000 hot dogs for those who find that classics never go out of style. For the modern diet, there are plenty of vegan options to choose from.

Speaking of vegan, or at least vegetarian, you’ll find the Impossible Burger available for the first time ever.

3. A Bigger Game to Serve a Higher Cause

Despite the big game’s offerings, there are likely to be more than a few leftovers. Those will be donated to the Miami chapter of Food Rescue. They serve shelters ranging from the Miami Rescue Mission to the Lotus House. And for the record, Food Rescue delivers more than 36 million meals to the needy (and you can get involved here). While the game is expected to have a $30 million impact on the South Florida community, at least $1 million of that will be helping the less fortunate.

Those concerned about the environment will be pleased to know that nearly 99% of all single-use plastics has been eliminated from the concession stands.  And if you’re worried about the ocean, Centerplate’s working with Ocean Conservancy on sustainable provision of oysters and a long-term focus on conservation efforts.

Ocean Conservancy does more than just help the South Florida region. It helps try to keep Alaskan oil out of Alaska’s , saves rare whales in the Gulf of Mexico and studies the effect of climate and temperature on the ocean waters.

4. The Most Experienced Team in Miami

Last year, Tom Brady won his sixth Super Bowl ring in Atlanta, breaking the record held by defensive player Charles Haley, according to the Sporting News. Well, Kevin Mitchell, the general manager of operations, is supervising his sixth Super Bowl. He leads a team of more than 2,500 employees and another 100 chefs. And it’s not like he’s never seen the territory, as this is Mitchell’s third Super Bowl in Miami.

And they’ve done 15 more classic matchups between the best of the NFC and the AFC, with a leadership staff that boasts 50 Super Bowls among them. How many teams can say they’ve done the Rose Bowl, San Diego, New Orleans, Phoenix, Indianapolis, Santa Clara and at least four different stadium names in Miami (now the Hard Rock Stadium)? Not even the New England Patriots can match that.

5. No ‘Beef’ With These Recipes

What would a food article about the Super Bowl cuisine be without a recipe for you to make and serve before the big game? Centerplate’s food management site lists this delicacy from Chef Jet Tila for an Asian Beef Sandwich. Here’s how to make it.

This recipe has been updated to include recipe for slaw. It serves 50. And if this sandwich tastes half as good as the recipe looks, these Asian beef sandwiches are sure to score big on Sunday. 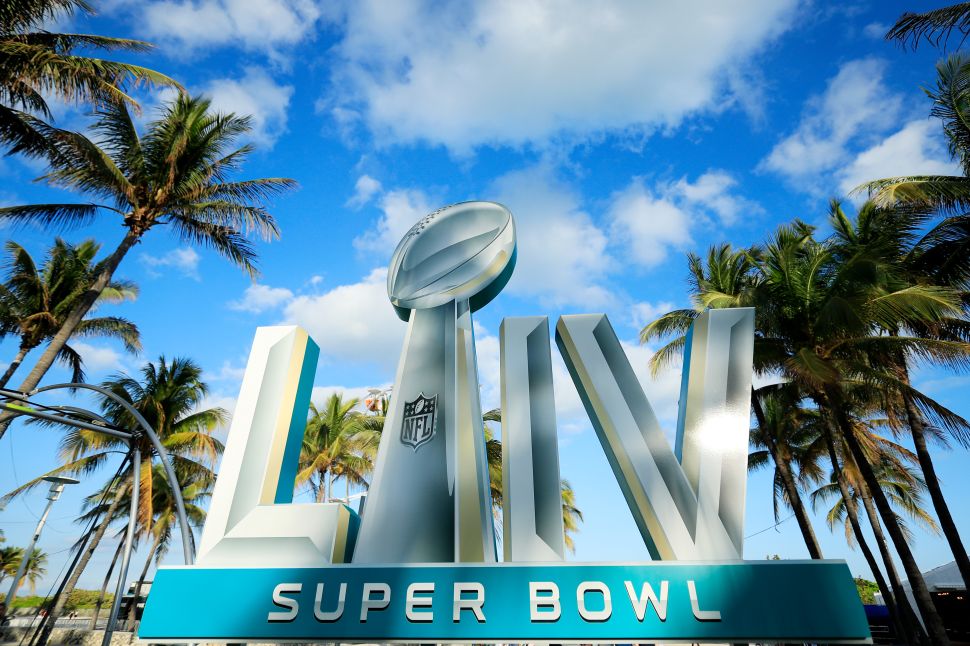