There hasn’t been a genuinely exciting Batman reveal in many, many years. The Ben Affleck Batman costume as revealed in 2014 ahead of Batman v Superman: Dawn of Justice was so pathetically depressing that it sparked a “Sad Batman” meme. After that, it’s been mostly zip on intriguing Bat-related revelations. The DC Extended Universe movie starring the character were largely incoherent or emotionally inert, and Ben Affleck eventually departed the role.

SEE ALSO: The Sleek New Batmobile From ‘The Batman’ Is Here

Enter director Matt Reeves (Cloverfield, the Planet of the Apes remakes) and our new Bruce Wayne/Batman, actor Robert Pattinson (The Lighthouse, Twilight)—one of the most interesting actors Hollywood’s got right now. Their take on the character drops in 2021 and looks to be a return to form for the caped crusader. Reeves just whet our appetites with a costume reveal and camera test on Twitter this afternoon. Let’s go to the tape:

The elements are all there. Pattinson’s Batman has a dark cowl, an armored chest-plate with an earless bat logo on it and a cape that seems to be bound at the neck and shaped into a wide collar. It’s hard to tell in the dark, short teaser clip—which is less than a minute long—but Pattinson’s head seems to widen out near the top, suggesting that bat ears on the headpiece point outward and away from his head, just like they did in Batman’s very first comics appearances dating back to more than 80 years ago, in Detective Comics #27 from 1939. On that cover, too, the bat logo did not have ears on it. As eagle-eyed fans on Twitter have pointed out, the bat logo is also shaped out of two pistol grips, a likely reference to the comics lore that Batman built his costume partly out of the gun that was used to kill his parents in his origin story.

The cowl and shoulders. Matt Reeves/Twitter

All this points toward a big effort to reference the character’s earliest superheroics from the Golden Age of comics. If Reeves and Pattinson are in fact adding retro flavors to their on the character, that could mean great things for this movie. Tim Burton’s Batman from 1989 famously and very successfully used its production design and costuming to transport its audience to a gothic, 1940s-influenced Gotham City, with a Batman who fought a Joker who more closely resembled an old-school gangster than Joaquin Phoenix’s Oscar-winning, if controversial take on the character. 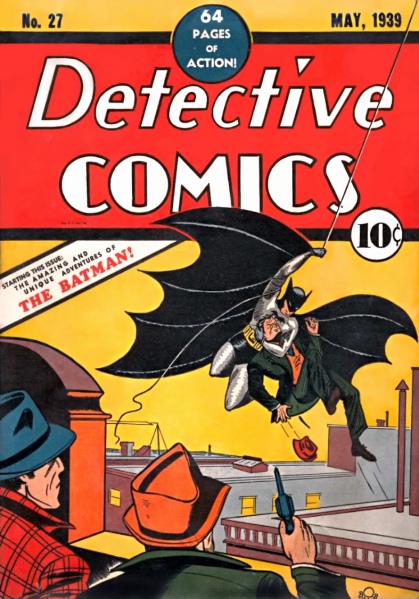 Batman 1989, the Burton-directed Batman Returns, and the legendary cartoon Batman: The Animated Series paid homage to the character’s roots in the ’40s in various ways (and massive commercial and critical acclaim), so it’ll be exciting to see where this goes. That said, it’s still early. We’ll only get the full reveal much closer to June 25, 2021, when The Batman debuts in theaters.

The suit is incredible. 🦇 pic.twitter.com/7KSqDIrIUr