To watch the Oscar-nominated Syrian documentary The Cave—about an underground hospital in Ghouta and the woman who runs it—is to endure a barrage of human suffering, terrifying reality, and burning questions. Some of those questions are raised within the film itself, among the hospital staff members, who treat thousands of helpless victims as bombs from Russian forces and Syria’s own regime shake the earth above them: “Is God really watching?” “Are we really making a difference?”

Other questions come up about the production: While making this movie, could all of director Feras Fayyad’s crew members have possibly made it out alive?

Unfortunately, as The Cave‘s end credits reveal, four crew members did not, and they join countless locals who’ve lost their lives under the efforts of Syrian president Bashar al-Assad, and his Russian allies, to basically wipe Ghouta, a Damascus suburb, off the face of the earth. As to whether or not the hospital staff, led by the heroic Dr. Amani Ballour, are making a difference, one need only watch The Cave, or track the global echoes of its impact, to arrive at a resounding “yes.” Ballour, a pediatrician who ditched her postgrad studies and returned to Ghouta to manage the Cave (becoming the first Syrian woman in history to run a hospital), is seen pulling shrapnel from the mouths of infants and saving young children from rocket wounds without any anesthesia. (It feels safe to say that no film has ever shown carnage unleashed on youth as unflinchingly as this one does.)

And thanks to Fayyad—who was imprisoned and tortured by Assad after releasing his last film, Last Men in Aleppo, which also received an Oscar nod—these doctors’ documented efforts are making a difference around the world, as more and more audiences see the raw horror and valor of their work amid a conflict that’s been raging for more than nine years. That attention, in turn, has also helped both Fayyad and Ballour roam more freely to spread their movie’s message of hope.

On January 17, producer Sigrid Dyekjær, of Danish Documentary Production (who co-produced The Cave with National Geographic Films), released a statement about last December’s denial of an extended U.S. visa for Fayyad by the U.S. Embassy in Copenhagen, where Fayyad resides. “While waiting on the U.S. Embassy in Copenhagen to grant him another appointment, [Fayyad] received news that his aunt’s house was bombed and his parents’ and childhood home was in the line of fire in Syria,” Dyekjær wrote. She went on to explain that although Fayyad learned that his family was eventually out of immediate danger, he wound up being detained by Copenhagen’s immigration police, before finally being released into her care. Her efforts continued as she and Fayyad went back to the embassy again to try to acquire the visa that would allow Fayyad to enter the U.S.

On January 22, at a private screening of The Cave in New York City, Dyekjær, in attendance for a post-film Q&A, reported that Fayyad had finally been granted his visa, thanks in part to support from the Academy, the Director’s Guild of America, the Danish Film Institute and more groups and filmmakers. This was after weeks of Fayyad being unable to participate in industry events that honored his movie. She also described how Danish Documentary Production, led by Dyekjær and two other female producers, came to work with Fayyad.

“He specifically wanted a female company behind the film,” Dyekjær said at the screening, “so they would exercise care on a deeper level.” It makes sense for a documentary that, in its depiction of Ballour, not only shows her grace and resilience under unimaginable pressure, but also her reckoning with the misogyny of her homeland. “It shows the toxic masculinity that controls the country,” Fayyad told Observer in an interview last October.

Dyekjær also described the dire—and covert—circumstances under which Fayyad had to shoot The Cave and export his deliverables. From 2016 to 2018, Fayyad’s cinematographers filmed Ballour and her (mostly female) staff as they rushed waves of brutally injured patients into the hospital, guiding them to operating rooms or subterranean sanctuaries.

“They would smuggle the [filmed] material out,” Dyekjær said of Fayyad and his crew, “uploading it to Dropbox so we could download it in Denmark.” The climactic event that most impacted the film’s narrative, the production and all of the people in Ghouta was Assad’s 2018 chemical weapon attack on the town. The attack resulted in a crucial satellite being bombed, which delayed the process of Fayyad’s file transfers; however, the aftermath was still captured on camera, as was its tragic effect on victims, particularly children.

“[Ballour’s] greatest sadness is over the people she couldn’t save,” Dyekjær said. “Ten children would enter the hospital with chemical poisoning, and because of a lack of personnel and resources, [Ballour] could only choose four to operate on and save. The other six wouldn’t survive.”

It wasn’t long after this attack that a deal was made forcing all remaining residents of Ghouta to evacuate and flee to refugee camps in northern Syria. This is also where The Cave ends, with Ballour reluctantly boarding a bus, looking around at the hellish rubble from which she saved so many people for years. Ballour later relocated to a refugee camp in Turkey, until she, too, was finally granted a visa to enter the U.S., roughly one week ago. On Monday night, Ballour sat down with Katie Couric following another New York screening of the film, and on Tuesday morning, she appeared on Good Morning America, giving her first televised interview after arriving in this country.

Those who worked on The Cave are expressing joy and gratitude that both Fayyad and Ballour can now attend the Oscars to represent the film, including Nat Geo Films, whose reps released a statement saying, “The outpouring of support from the documentary and entertainment community to help us in our efforts has been overwhelming.”

But for Fayyad and Ballour, coming to America is about much more than an awards ceremony. Both are endeavoring to raise awareness and support in the West for the Al Amal (Hope) Fund, which they founded to help more female medical workers like Ballour; to prepare and educate future female leaders in conflict zones; and to educate many young children “so they can be the leaders of tomorrow.” As Ballour told Good Morning America, “I want this story to stay—to tell the truth about what happened in Syria…and what is still happening now.” 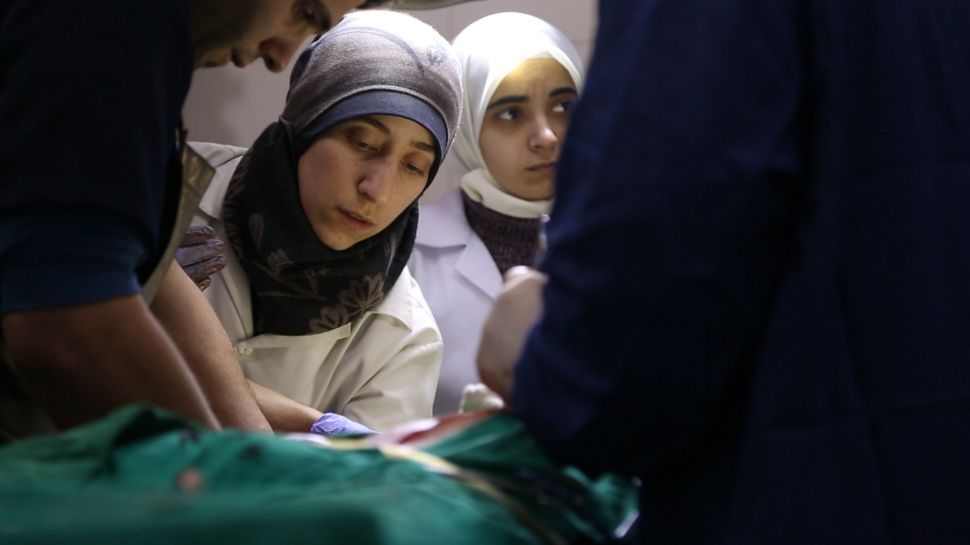