For a great majority of its first two-thirds, Leigh Whannell’s The Invisible Man is a crackling exploration of societal and domestic terror, filled with ideas and possessed of a singularly unsettling point of view.

By using its camera to hold the audience complicit in the violence and harassment forced upon its hero, the movie weaponizes empty spaces and domesticity in a way that could hardly feel more trenchant or relevant in the era of MeToo. We see Elisabeth Moss’s Cecilia—her friends call her “C” because seeing is one thing they can’t do—in a kitchen looking out into space at her invisible interloper and she almost stares right at us, her searching eyes seeming to plead, Why aren’t you doing something?

Other times, the camera takes the point of view of the unseen abuser—but not in the “stalker cam” fashion typical of most horror films. Instead, it’s a way to observe domestic scenes from the distance of a hallway or around a corner, and always in silence—the same silence that has gripped so much of society at large when confronting domestic abuse.

When Whannell’s movie is at its best, the audience is not just a witness to the terror; we are part of the machinery that inflicts it. Which is not to say that—when it works—this remake of James Whale’s 1933 classic is a success born of camera placement, special effects, or even conceptual daring.

The reason The Invisible Man holds you in an emotional vise grip for so much of its running time is thanks almost entirely to Moss. The Her Smell and Mad Men star gives a central performance that serves as a master class in acting for a horror movie—though that may be the least of what she is able to accomplish on screen.

This is a movie where Cecilia’s sanity and lucidity in the face of no one believing her accounts of abuse comes off as its own type of craziness; Moss commits to that idea with all her being. Able to convey terror, strength and cunning within a single breath, her boldly physical approach to performance always serves the story rather than merely displaying of her considerable technique.

This becomes all the more crucial in the film’s last third, once it leaves the house and gets into the street and the hospital ward of a prison. This is when The Invisible Man starts to lose the focus that made it so singular and terrifying and begins to develop into a more typical gun-fight-in-the-rain special effects actioner. The movie becomes demonstratively less scary once the blood starts to spill and the bodies pile up. The story’s twists—up to and including its conclusion—also start to strain credulity.

But man, Moss never stops selling it. Ably supported by Aldis Hodge (Clemency) playing James, a cop and family friend who shelters Cecilia when she first escapes her abusive household, Moss gives emotional heft to even the most ludicrous of plot points.

Still, the movie is at its most exciting when Moss is not going at it alone and her adroit emoting is matched by the thematic intensity of the story. This may be a monster movie, but what makes it truly frightening is less the title character (played by Oliver Jackson-Cohen who is barely in the movie, at least visibly) than the way the film shows how domestic violence and its threat colors and distorts everything around it.

The errant dog dish, frying bacon, bed sheets, coffee grounds—the most unremarkable aspects of our housebound identities are made pestilential by the perniciousness of the film’s toxic central relationship. The most profoundly transformed by this dark energy? The seeming empty spaces where we somehow know he is lurking, his quietude not just his own, but ours as well. 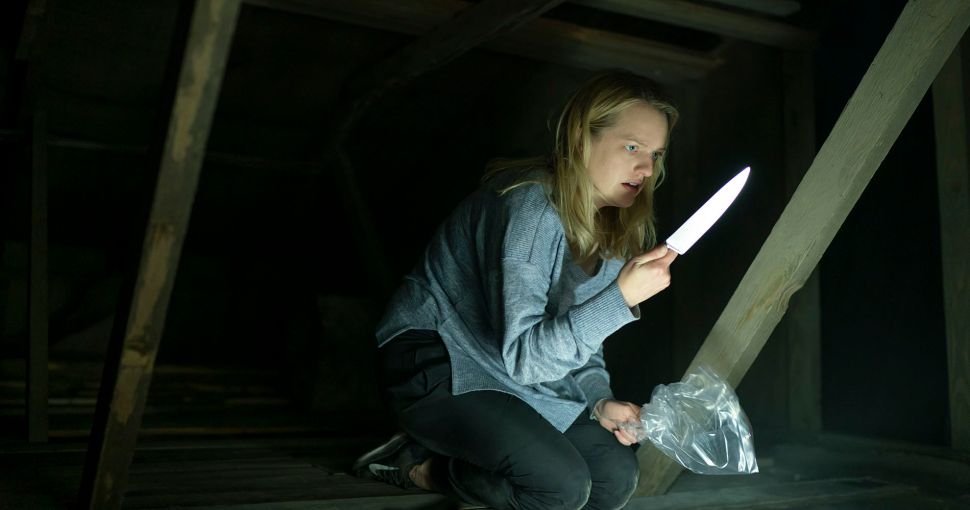