Tye Sheridan, the young actor from Texas who has been steadily making a name for himself in a series of films that can only be called forgettable (he was especially good in Mud, but who remembers it?) now stars in another one. In The Night Clerk, he plays Bart, a benign character the title describes—a 23-year-old night clerk in a nondescript hotel with no business. Bart is an oddball who lives at home with his mother (another sad waste of the formidable Helen Hunt) and lives an immobile life of such boredom that to pass the time he videotapes the activities of the occasional female guests. In one of the rooms he’s rigged with new technology, he watches a woman being murdered. That’s about it. For the next 90 minutes, nothing much happens, but Mr. Sheridan is never less than fascinating as he goes through the mechanical paces of searching for an identity that eludes everyone he meets, most of all himself.

SEE ALSO: The CGI Dog Is Lovable Forever in ‘The Call of the Wild’

Bart, you see, has Asperger’s syndrome, a psychological condition on the autism spectrum characterized by challenges with social interactions. Perceived as naive, unsophisticated, clueless, unfashionable and stupid—none of which is true—Bart is desperately lonely and something of an enigma to the detective (John Leguizamo) who answers a 911 call and makes Bart a chief suspect. After a new guest (Ana de Armas, from the awful 2019 murder mystery Knives Out) shows him some sexual compassion, Bart buys cologne, a new suit and other items of self-improvement, but she breaks his heart and he ends up borderline catatonic as he staggers through a crowded mall repeating “Oh boy, oh boy, oh boy” to everyone he passes.

For an alleged psychological thriller, The Night Clerk has no thrills, suspense or tension. Young Mr. Sheridan is nothing less than interesting and quirky, but everyone else seems zombified. The only reason I can figure out why Helen Hunt would play the mother (or anything else in a movie this deadly) is maybe she wanted to give a new, inexperienced director a break. But the writer-director here is the often distinguished and usually reliable Michael Cristofer, whose past screenplays have included Interview with the Vampire, Shadow Box and Less Than Zero. As a director, he concentrates on slow, inconsequential shots of cars starting, stopping, and pulling into gas stations, and the non-verbal star buying two pints of ice cream, driving home, sitting down on the sofa and slowly eating both pints, spoon by spoon. There were times in The Night Clerk when I could have used a pint myself. 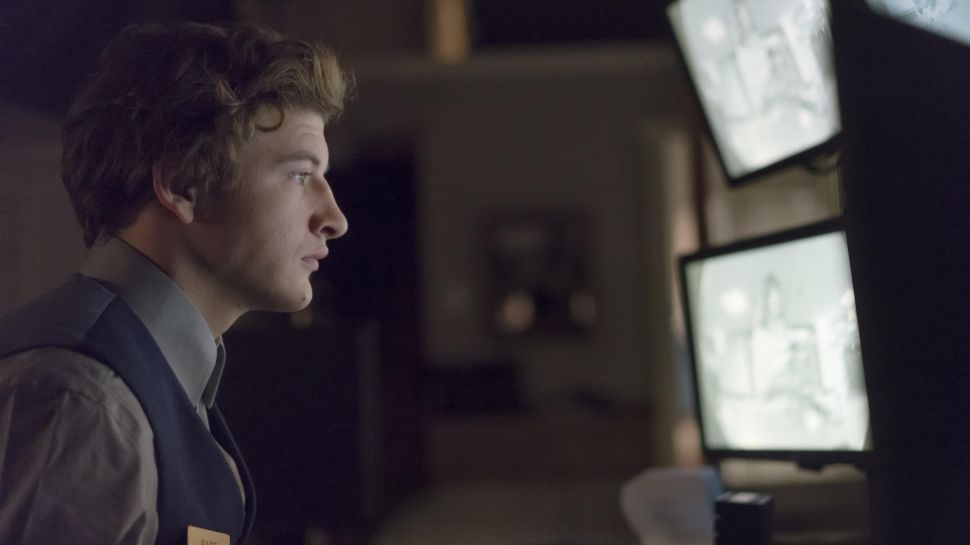