“It doesn’t make sense that somebody would steal my paintings,” says Czech artist Barbora Kysilkova. She’s not just being modest: her larger-than-life oil paintings, intense and unflinching studies of the human condition, don’t really lend themselves to smash-and-grab art robberies. Especially 2013’s child portrait Chloe & Emma and 2014’s memento mori Swan Song, two photorealistic works both measuring more than 4 by 6 feet. Despite their size, they were still snatched from Galleri Nobel in Oslo in April of 2015. She was not only heartbroken—she was perplexed.

She was also impressed, since the paintings weren’t just sliced out of their frames with a knife. The two culprits, recorded on security cameras, had gingerly extracted more than 200 nails in order to remove the canvases without any damage. “Every single nail lifted, not a single thread of the canvas was left,” she says in a new documentary The Painter and the Thief, which had its world premiere at the Sundance Film Festival last week. That kind of meticulous effort would take almost an hour, Kysilkova explains. “I actually started to have some kind of respect for these people,” she laughs. “I myself could not have done it better.”

SEE ALSO: Why Agnes Gund Is Encouraging Other Collectors to Sell or Donate Their Art

Her respect soon turned into goodwill. After the authorities quickly apprehended the duo, Kysilkova got to know one of the criminals, a Norwegian drug addict named Karl-Bertil Nordland. “How often does this happen that a living artist has work stolen and gets to meet the actual thieves?” she says. “That, for me, is where the story really starts.” Her boyfriend, the novelist Øystein Stene, knows a good story when he sees one, too, and he encouraged her to get together and see what happens.

So Kysilkova asked Nordland why he took the paintings. “Because they were beautiful,” he told her.

“His answer just disarmed me totally,” she says. “OK, man, I’m yours. You got me. You won me.” And then she offered to paint him.

The 2015 heist, and the unlikely connection that follows, is the subject of The Painter and the Thief, a project that began when Norwegian documentarian Benjamin Ree decided to follow his curiosity and Google the term “art thefts,” serendipitously stumbling onto news coverage of the Galleri Nobel crime. The fact that Kysilkova had already met one of the robbers also piqued his interest.

“I thought that this would be a short, maybe a 10-minute documentary,” Ree told Observer while in Utah to promote the movie alongside Kysilkova. But then he filmed what happened when Kysilkova showed Nordland his portrait. The sinewy man, covered in tattoos and sporting a severe undercut hairdo, is stunned into wide-eyed silence before crying with a cathartic howl. “And then I got even better footage,” says Ree. “And I thought, Let’s make it longer.”

That decision suddenly opened up the film in unexpected ways. Thankfully, a friend of Kysilkova’s already had videos of her painting the stolen works. “So we had a lot of archival footage to tell the story from the very beginning,” Ree explains. But now he could follow the thief as well as the painter.

Over the next three years, Nordland checks into rehab, relapses, crashes a car he stole, goes into the hospital and ends up in prison. Meanwhile, Kysilkova is there for him every step of the way, giving moral support and emotional guidance. And all the while, unbeknownst to Nordland, she keeps trying to track down the two stolen paintings.

“He said he doesn’t remember,” says Kysilkova. In the film, Nordland claims that he was so stoned out of his mind that the whole incident is a blur. “I really did not like asking him,” she continues. “I always felt like I was digging in a wasps’ nest. Also, he has that tattoo!” Kysilkova adds, referring to one of Nordland’s chest tattoos which says Snitchers Are a Dying Breed. “He will never tell.”

But Ree does get Nordland to open up about himself and share his own insights, so much so that he bifurcates the film’s focus. In a daring structural move, Ree interrupts his chronicle of Kysilkova and jumps over to Nordland’s point of view, going back in time for good measure. And what he uncovers is a bright, once-promising young man abandoned by his mother, forced to live with a distant father, and witness to a dozen of his closest friends succumbing to gang violence and drugs.

And then Ree starts asking Nordland for insights into Kysilkova. “That’s the beauty of having two perspectives on this,” says Ree. “And of course we need to acknowledge that.” Her own life, including a former abusive relationship, has its share of dark moments. And that outlook shows through in Kysilkova’s works, including 2011’s Pieta, in which a shirtless woman in a red bra clings to another similarly dressed woman. Or 2011’s L’amour et mort, vive l’amour, which shows a topless woman covering her breasts with one arm and hiding her face with the other while a man stands menacingly. Or 2010’s Maenad (Bacchanalia), an extreme close up of a blood-drenched face baring silvery white teeth.

“Since childhood, I have always been somehow attracted to less comfortable issues of mankind,” says Kysilkova. “Art is not meant to be a decoration. It’s not meant to be digested easily. Art has an obligation to put in front of our eyes something we primarily don’t want to deal. It should get under your skin. That’s why I do what I do.”

An ex-junkie and ex-con like Nordland is the perfect embodiment of Kysilkova’s philosophy, and maybe even her ideal muse. In portrait after portrait, she takes the time to really look at him despite his destructive flaws, and makes him feel like he’s being seen for the first time. “I told him that this movie would be an amazing chance to tell the world what happens when we get rid of the prejudices and we just approach each other human to human,” she says. “He’s not the best citizen, but I really moved that all away and let him come to me. And he let me come to him.” 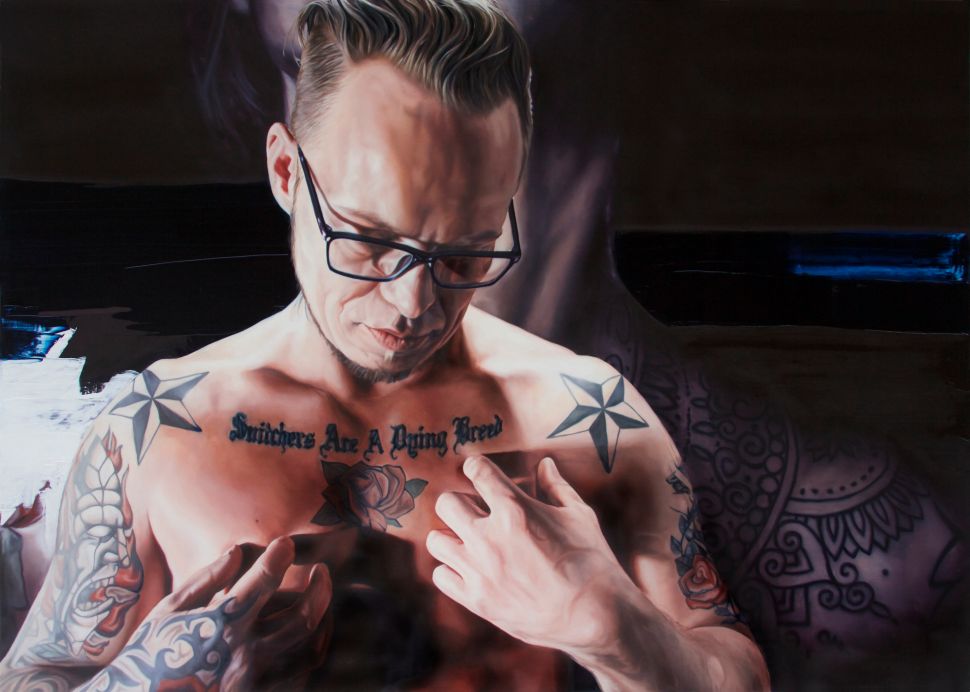