In every decade, people have complained about the consolidation of power within a few companies in an industry. Then, something always comes along to dis-intermediate and change that status quo. Bulky cable packages are steadily giving way to digital streaming; social media muscled in on email’s turf; the cell phone pushed us to texting instead of calling. The point is that innovation is constant and the status and fears of today will dissipate as the landscape evolves and changes to be replaced by something else.

Today, when discussing the entertainment industry, we are fond of focusing on real or perceived bogeyman. Netflix is not one of them.

SEE ALSO: Netflix Will Shrug Off Its Oscars Disappointment and Eventually Win Over the Academy

Despite concerns that Netflix will transform into a monopoly and that its control over production, distribution, and retailing is bringing about the slow death of Hollywood, the towering streamer has brought about many positive changes. On Wednesday morning, Netflix released To All the Boys: P.S. I Still Love You, the sequel to 2018’s surprisingly wonderful and popular romantic comedy starring Lana Condor and Noah Centineo (based on a book series). Love or hate this high school romance, the very existence of a sequel speaks volumes about the divide between streaming and theatrical cinema. Popularity, fame and stardom have taken on new metrics and Netflix has been spearheading this global innovation.

The direct-to-consumer company has created a self-contained cinematic ecosystem, while recognizing the value of Young Adult content, that enables something as simple as a teenage love story to breakout into its own on-screen franchise. That simply could not happen via the theatrical model these days—the economics of traditional movie-going just wouldn’t support it. The Hunger Games was the last new-to-screen megabucks franchise to successfully launch, and The Hangover trilogy was the last moneymaking comedy franchise to actually work. Rom-coms are a dying art viewed as financial risks by most studios that would rather invest into tentpole productions. Warner Bros.’ Isn’t It Romantic ($31 million budget, $49 million box office haul) and Lionsgate’s Long Shot ($40 million, $53 million) both carried margins of error smaller than the Death Star’s exhaust port.

Netflix isn’t operating under the same limitations, as everyone already knows. When you remove the reliance on ticket sales to generate profitability, you are free to invest in whatever content your subscribers respond to. And Netflix’s 160 million worldwide subscribers across 190 countries are responding to homegrown stars like Centineo, Condor and comedy star Ali Wong.

In a way, Netflix is hearkening back to the star system of early Hollywood (ideally without all of the immoral cover-ups and fake names and backgrounds) by investing in and developing promising new creative talent. Condor gained roughly 5 million Instagram followers in the four weeks after To All the Boys I’ve Loved Before‘s release while Centineo, who has since been crowned as the latest “internet boyfriend,” saw his following swell from 800,000 to more than 13 million. Goodbye Q scores, box office dollars and magazine spreads, hello social media traction. These fresh-faced stars seem to enjoy the kind of immediate approval ratings boost that every Democratic candidate would kill for.

The paradigm of success has changed and Netflix is at the forefront of a new style of fame for a new generation of creatives. Viral celebs are influencers who drive attention back to Netflix which, in turn, continues to promote its homegrown stars. The streamer is now no longer a disruptor of entertainment but a launching pad. Centineo recently co-starred in Sony’s Charlie’s Angels reboot and will headline the upcoming He-Man remake. Condor played a supporting role in the James Cameron-produced Alita: Battle Angel and Syfy’s Deadly Class. Both will return for 2021’s threequel To All the Boys: Always and Forever, Lara Jean, which is already in post-production at Netflix.

Wong is perhaps the best example of the effectiveness of Netflix’s in-house development pipeline. The comedian first came to prominence with the streamer’s 2016 stand-up special Baby Cobra, which she performed while pregnant in her third trimester and which was cleverly released over Mother’s Day weekend. She followed this up with another acclaimed pregnant special, Hard Knock Wife, a short-lived role on the beloved animated Netflix comedy Tuca & Bertie and last summer’s breakout rom-com Always Be My Maybe (Netflix’s best rom-com for our money), which Wong wrote, starred in, and produced. She recently signed a lucrative new eight-figure deal for two new stand-up specials with the streamer.

Wong is now a bona-fide vertically integrated Netflix superstar with her hands in stand-up, sitcoms and feature films she develops herself, all at the same studio. The more her brand—which is directly linked to Netflix—grows, the more Netflix benefits. It is a symbiotic relationship unique to a fragmented Hollywood; rarely do we associate a particular star with a specific studio anymore.

According to Netflix, Always Be My Maybe was viewed by 32 million households while To All the Boys I’ve Loved Before emerged as one of its “most viewed original films ever with strong repeat viewing.” Centineo’s The Perfect Date also drew 48 million member household views, per the streamer. Long Shot, one of the best theatrical rom-coms of 2019, earned nearly $54 million worldwide. The average ticket price last year was $9.11, which means just under 6 million people bought a ticket (5,927,552.1405). It’s not at all an apples-to-apples comparison given the nuances of each choice ($40 trip to the theater vs a comfy couch movie night), but it’s striking nonetheless.

Theatrical cinema still packs the most powerful punch in the pop culture conversation (see: Disney, Oscars, etc.) It’s important and worthwhile when creators such as The Farewell‘s Lulu Wang and Crazy Rich Asians‘ Kevin Kwan and Jon M. Chu decline the big bucks streaming offers in favor of theatrical releases. But Netflix does make cinema more easily accessible to a greater number of people. The barrier of access, especially for prestige films such as Marriage Story and The Irishman, is no longer restricted to select theaters on coastal cities. That’s important and worthwhile too. We’ve reached a saturation point in which there’s hardly a wrong option between streaming and traditional.

Streaming TV usage has nearly doubled in less than two years, according to data from the Nielsen-owned Gracenote provided to The Hollywood Reporter. Adults 18 to 34 were determined to be the most likely consumers to pay for multiple SVOD subscriptions—an age bracket that has historically championed Netflix as its top entertainment choice. These consumers help drive a now constant online conversation connected to pop culture, a magnifying glass that is expanded by the global nature of celebrity-friendly platforms like Netflix and social media platforms like Instagram. As a result, stars like Centineo and Wong, and their subsequent Netflix projects, are capable of building international brand loyalty en route to becoming new-famous.

The status quo is no longer. It’s Netflix’s world, we’re just living in it. 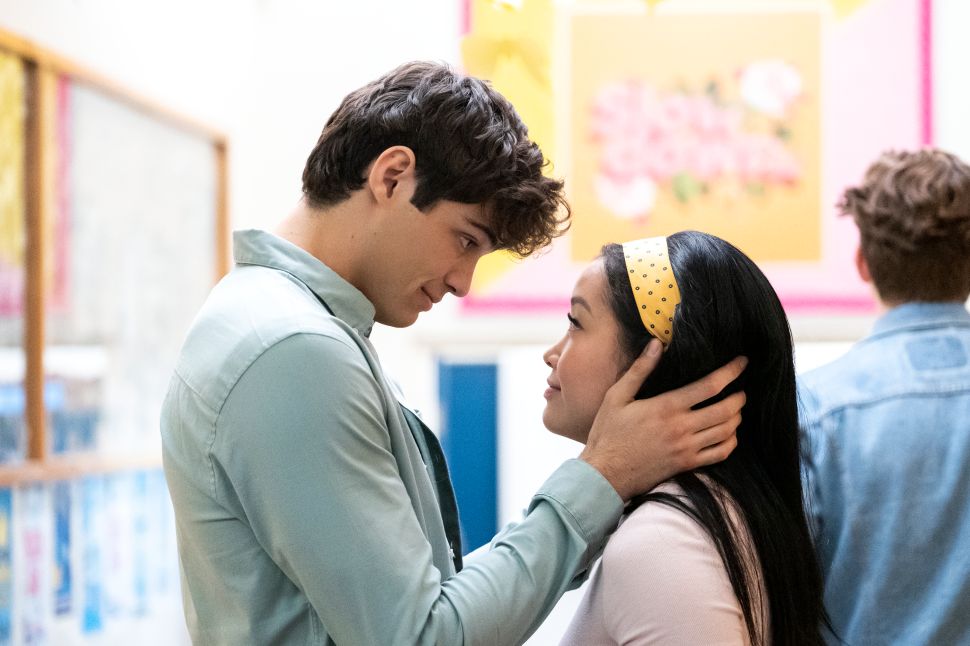