“Van Eyck: An Optical Revolution” is the world’s latest blockbuster exhibition, held at MSK in Ghent, the home of Jan van Eyck’s most important work, Adoration of the Mystic Lamb (1426-1432). The exhibition, which runs through April 30, sold 170,000 tickets just two weeks in, so it is a huge success by any standard. van Eyck lived in Bruges, but his masterpiece is the Ghent Altarpiece, an enormous triptych. The altarpiece is on many a list of superlatives: the first great work in oil painting, the first work of artistic realism, it was the most famous painting in Europe when it was completed, the most iconographically complicated, and a point of pilgrimage for artists and thinkers.

From 2012 to 2019, most of the altarpiece was painstakingly restored. This led to some major changes to the appearance of the altarpiece. For instance, it removed an 1823 overpainting and revealed the Mystic Lamb’s face that was originally painted by van Eyck as shockingly humanoid.

SEE ALSO: Why the Restored Ghent Altarpiece Lamb Is Creeping Out Viewers

Van Eyck’s training and early practice as a miniaturist, illuminating the Books of Hours with tiny paintings full of tinier details, is on full display. It is ideal to see these miniatures beside his mid-sized works and his colossal altarpiece panels. He was the first to transfer the detail-work of miniatures, and the particular skill set needed to paint them, onto a larger scale. How the panels of the Ghent Altarpiece must have felt like a luxuriance of space to him, after his early career hemmed in by playing-card-sized spaces, or smaller.

And what detail. You can see individual hairs on Adam’s arm, pores on his nose, hundreds of botanically identifiable plants, over 100 figures each with a unique face (the tradition at the time was to use a generic face in religious paintings), the light shining off and through rubies and pearls. The panels of the altarpiece are disassembled for display here and provided the focal points, supplemented by other works by van Eyck and his contemporaries.

I was in Ghent to speak at a conference on the many crimes in which the Ghent Altarpiece was the object. That includes some 13 different disasters, and it was stolen, all or in part, six or seven times, depending on your definition of theft, making it by far the world’s most-frequently stolen artwork. My 2010 book, Stealing the Mystic Lamb, was a sort of biography of the painting, which is easy to argue was the most important painting ever made.

I was wandering the gallery with colleagues from the security and policing fields, including Ibrahim Bulut, who worked as a security specialist on this show. He pointed out the revolutionary use of lighting employed here, a benchmark for future exhibits, including the highest-grade lights for jewelry displays mounted inside the protective glass cases. Other cases were spot-lit from above but the tops were made of opaque glass, which diffused the spotlight, mimicking daylight inside the case and eliminating any glare. The show is ingeniously curated, with the wall copy text shifted higher up on the wall, so crowds can read it easily without jostling those trying to look at the art. Historical objects were found to display next to van Eyck’s paintings of similar pieces, with an emphasis on how the light falls on the objects themselves (a blown-glass decanter for , a brass washbasin) and how van Eyck got it just right.

The theme of the exhibition is how these works represented, at the time they were unveiled, “an optical revolution,” and the point is well made. Dr Maximiliaan Martens, a van Eyck specialist at University of Ghent, pointed out how van Eyck’s main stylistic goal was to reproduce the play of light—its reflections, refractions, optics—in paint. He showed a slow-motion video of dropping into a -filled basin, how each drop smashing into the below creates a depression, and then catapults droplets into the air, which in turn crash back into the basin. We can only see this with a video in slo-mo, but van Eyck managed to paint this effect exactly as it looks in the freeze-frame of the video. “He clearly had photographic memory,” Slovenian artist Jaša, who accompanied us, said. “And an eye for remembering details that pass so quickly that most of us are not aware of them.”

In the Knights of Christ panel of the altarpiece, we see three types of reflections in one suit of armor. A knight is carrying a red lance, and we see the reflection of the lance “broken” into two halves as it bends over his angled breastplate; then we see sunlight reflected against his convex shield, and again reflected off his convex, round shoulder guard.

As I approached the last room of the exhibit, I grew confused. Where was the rest of the altarpiece? The show was set up for the final room to be a great climax, the newly-cleaned Adoration of the Mystic Lamb central panel on full display, as well as the yet-to-be-cleaned monumental figures of Mary, Christ Enthroned (interpreted by some scholars as God the Father), and John the Baptist. But the exhibit just ended, rather abruptly. To see the main panels of the altarpiece, we had to go across town to Saint Bavo Cathedral, where they had been returned after the five-year restoration.

Part of the delight in seeing such details at the MSK exhibit came from the contrast to the way the altarpiece is displayed at Saint Bavo Cathedral, in a cumbersome protective case with at least five feet between the glass and the altarpiece. That’s a lot of real estate separating our eyes from the painting itself.

In the altarpiece panel depicting Mary in the Annunciation, she is shown kneeling before an open book, the Old Testament, of which just three words are visible. They translate as “As God sees.” And this is really what both the exhibit and van Eyck’s passion are all about. The ability to produce paintings that provide a God’s-eye-view of the world, from macroscopic (a field of hundreds of figures paying homage to the Mystic Lamb) to microscopic (reflection of light in a horse’s eye, pores on someone’s nose). The ability to get so close to the paintings in this exhibit was something I’d never before experienced. I had actually learned more from examining a zoomable five-billion-pixel digital image of the Ghent Altarpiece than I ever had looking at it in person, because of the buffer zone in the normal display of the altarpiece at Saint Bavo.

With today’s security technologies, there is no need for such a case—the work could be just as well-protected with a case that is like those used in the new exhibition, with robust security glass that looks delicate and allows us to get inches from the painting. In October 2020, Saint Bavo is opening a new visitor’s center for the altarpiece, and I can only hope that this will coincide with an improved display of the precious work itself. 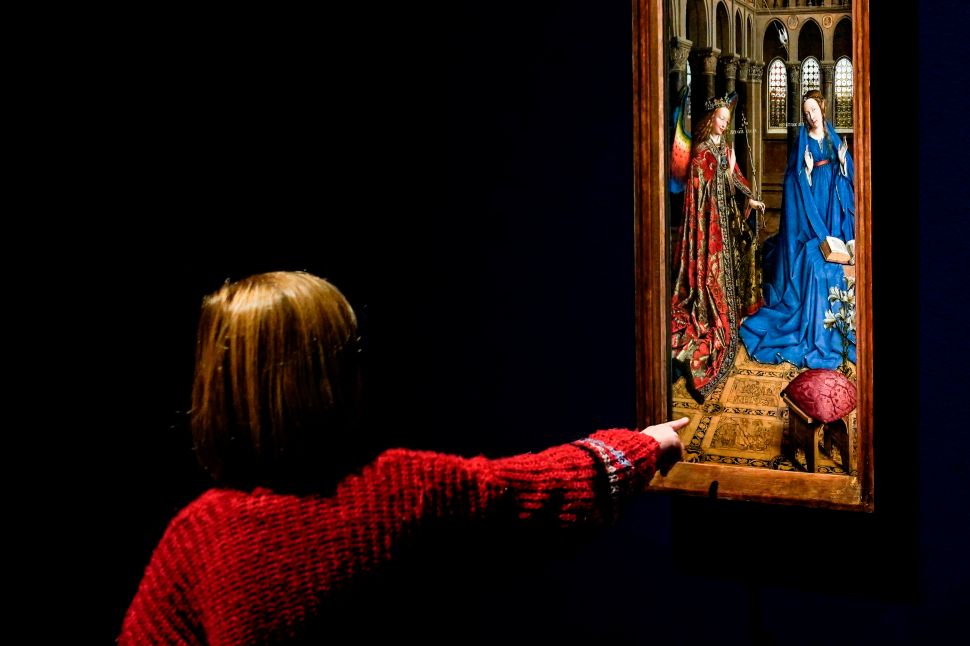