If “Vida Americana” at the Whitney Museum of American Art needed a logo, it could be the scowl of Emiliano Zapata—part Spanish, part indigenous Nahua—who led the Mexican Revolution in the early twentieth century. In Agrarian Leader Zapata, Diego Rivera’s 1931 sketch—a full-scale charcoal drawing for a mural—Zapata, in lowly white cotton, glares outward over his black mustache, his foot (and his horse’s foot) on the corpse of a Mexican soldier.

Mexican muralists stormed the U.S. art world in the 1930s. Rivera’s one-man MoMA show got more visitors in 1931 than a Matisse exhibition the same year.

SEE ALSO: The Key to Raphael’s Genius? His Way With People.

While jobless American protesters were beaten in the streets, artists like Rivera responded with images, the larger the better. The muralists rallied painters and the public, and even patrons, for a while.

“Vida Americana: Mexican Muralists Remake American Art, 1925-45,” through May 17, reopens a twenty-year window, during which Mexican painters, most of them communists, traveled north for major commissions, shaping generations of U.S. artists who worked with them. Hence the title “Vida Americana,” not simply “Vida Mexico.”

“There’s been a common assumption that the French were the influence on American art in the twentieth century,” said curator Barbara Haskell. “’Vida Americana’ changes that narrative to show that it was the Mexican artists who had the most profound pervasive influence on the art of this country.”

But wait. You don’t have to buy that whole argument to see, through 200 works, how raw drama and sheer magnitude penetrated into American art and into institutions that supported it.

Communicating that scale in museum galleries is tricky—Whitney director Adam Weinberg admitted that curators were doing it with one hand tied behind their backs. “They’ve found amazing ways to bring those murals to life—not easy to do, because you can’t bring those murals here,” he said.

Murals by nature are in situ, and can’t travel, and a major one by Rivera at Rockefeller Center was ordered destroyed by the philanthropist who commissioned it. Still, some colossal reproductions give a sense of the massive paintings and the ambition behind them.

Given that tumultuous history, “Vida Americana” starts out gently, with bouquets of paintings by Diego Rivera and his peers that could have come from any Mexican tourism brochure—women in native costumes, flowers, indigenous women holding flowers.

Soon enough the gloves are off, with a reproduction of Prometheus, a wrenching nude figure that by Jose Clemente Orozco painted in 1930—not for the streets of the barrio, but for a dining hall at Pomona College outside Los Angeles, where it is today. Those clenched and frayed muscles found their way into energized paintings by Jackson Pollock before he started dripping. Jacob Lawrence was another fan, as we see in Lawrence’s paintings from his “Migration Series” (1940-41). 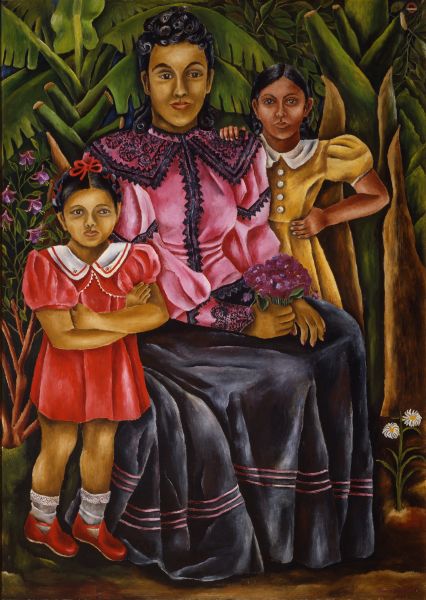 Around a corner is a photo-reproduction in black and white of the 1932 mural Tropical America by David Alfaro Siqueiros, who was expected to furnish a decorative wall scene on a downtown Los Angeles street. Instead, Siqueiros, a die-hard Stalinist, painted a sprawling landscape of decay, with ancient monuments in ruins and a crucified native Mexican in the center. That mural would eventually be painted over.

Also reproduced in the show, and also gone, is Rivera’s grand 1932 commission for Rockefeller Center, Man at the Crossroads, a massive salute to the technological future, shown in full scale at the Whitney. Grand understates its size. Rivera’s patron, Nelson Rockefeller, commissioned the work and followed the project as Rivera painted it, but warned that inserting the Bolshevik leader Vladimir Ilyich Lenin into a small ensemble of figures might offend eventual visitors.

Rivera, who hadn’t put Lenin in his initial sketches, refused to replace the Russian leader’s likeness with a generic face.  Rockefeller paid the stubborn artist’s fee, fired him, and the entire mural was covered with plaster.

Looking at the fresco now in reproduction, Lenin seems like a tiny footnote, as does Trotsky, whose image figures among dozens. The vast reproduced mural reminds us what Rivera dared to imagine, and what New York lost forever.

Rivera’s frescoes fared better in Detroit, at the Detroit Institute of Art, where the artist created murals of car manufacturing in 1932-33 for the museum’s interior court. Somehow the Mexican communist got on with the museum’s director, and with its auto exec benefactor, Edsel Ford, who resisted complaints by local clergy.  Shown in a projected panorama, in reproduction, “Detroit Industry” is a microcosm of American culture. Even in a shrunken struggling Detroit, the paintings are the envy of any American city. 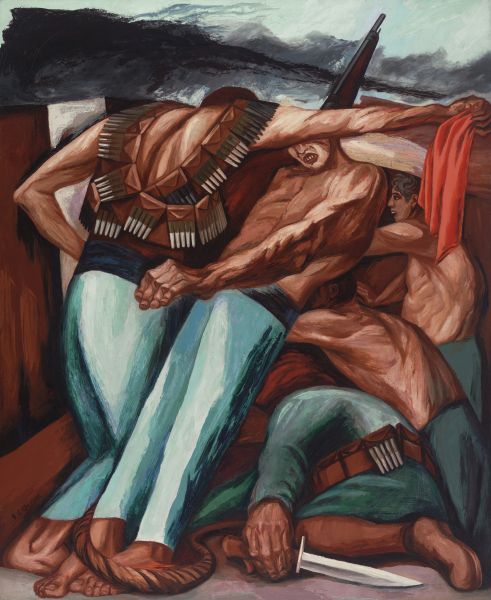 American artists, whose politics range from shrill to somber, are the other side of “Vida Americana.” Thomas Hart Benton drew on Rivera in his scenes of early U.S. history, as did Ben Shahn.

Yet for sheer drama among those Americans, there’s nothing like Bombardment (1937) by Philip Guston (then Goldstein), a scene in a round frame of centrifugal flight from a bombing attack overhead in the Spanish Civil War You can see the deadly side of industrial production in the neat rows of bombers in the sky.

Guston also journeyed to Morelia in Mexico with Ruben Kadish and Jules Langsner from 1934 to 35 to paint The Struggle Against War and Fascism, scenes of torture and anti-clericalism at the Regional Museum of Michoacan. We see that project in a scale model at the Whitney. Soon after those works were painted, they were covered for decades.

By the 1940s the world was turning the page on the muralists. “After World War II we had McCarthyism,” said Haskell, which made political art unwelcome in the United States. “Part of it was that abstraction became totally dominant,” she added, “figurative painting was considered conservative.”

Conservative? If that were the case, more of the muralists’ works would have survived. But thanks to curatorial archaeology, Rivera’s Rockefeller Center mural, which probably would be a monument today, is back for a few months.