Since the outbreak of COVID-19, or the coronavirus, first began in late December, the top priority has rightfully been the safety and health of people across the world. But there’s no denying that the virus’ spread is also having a significant toll on global industry. While the fallout being felt in the realm of film and television pales in comparison to the human cost of the coronavirus, it is still reverberating throughout the economic folds of the business.

China, the world’s second-largest box office region, was immediately hit by the full effect of the coronavirus as the majority of the nation’s 70,000 movie theaters remain closed. This ripple effect has made its way to Hollywood, which is now undergoing massive shifts in response to the pandemic. The financial ramifications will only compound as the virus spreads.

To track the impact, here are the most significant developments in the entertainment industry related to the coronavirus.

Chinese movie theaters remain closed: China’s late January Lunar New Year holiday box office corridor was completely wiped out by the coronavirus, leading to massive financial losses. As theaters remain closed, local distributors have cancelled or postponed the releases of dozens of films. Some Middle Kingdom studios have even opted to premiere blockbusters online, such as Lost in Russia and Enter the Fat Dragon. This also impacted January imports such as Jojo Rabbit and 1917. UPDATE: After briefly re-opening a few hundred movie theaters, China decided to close cinemas once again.

Disney’s Mulan: Mulan was intended to debut globally on March 27, but in early February outgoing Disney CEO Bob Iger told CNBC that its Chinese release would likely be postponed. Now, there are concerns that Mulan won’t be receive a release in China at all. UPDATE: Disney has delayed the global release date of Mulan and The New Mutants.

#TheNewMutants has been delayed due to the coronavirus. For those keeping track of all the film's release dates so far:

Black Widow: Disney’s has removed Black Widow, originally slated for a May 1 opening, from its release schedule. A new release date has not yet been made public.

Avatar Sequels: Production on James Cameron’s $1 billion Avatar sequels in New Zealand has been postponed. “We’ve delayed it,” producer Jon Landau told the New Zealand Herald. “We had plans to come down Friday night with a group of people and start back up and we made the decision to hold off and continue working here [Los Angeles], and come down there a little bit later than we’d planned. If I told you we are going to know something in two weeks I’d be lying. I might not be wrong – even a broken clock is right twice a day. But I would be lying because I don’t know…We’re in the midst of a global crisis and this is not about the film industry. I think everybody needs to do now whatever we can do, as we say here, to flatten the [coronavirus] curve.”

Sony: Sony Pictures announced that it would delay the release of seven films, including Morbius, Ghostbusters: Afterlife, Uncharted and Peter Rabbit 2: The Runaway.

AMC: AMC Theatres, the largest exhibitor in North America, announced a “50-50″ policy to run through April 30 in which screening attendance is limited to no more than 50 persons per film.

“The health of our guests and employee teams comes first for AMC. Therefore, effective immediately, at all our U.S. theaters that are open, we will limit ticket sales per showtime in each of our theatre auditoriums to a maximum of 50 percent of normal seating capacity and a maximum of 50 people, whichever is less,” said AMC Theatres CEO Adam Aron.

EXCLUSIVE: In sign of what many are expecting is yet to come for all theaters in the U.S., Regal Cinemas is shutting down all their theatre locations starting Tuesday, March 17 https://t.co/sMhG4y7tZu

NYC & LA: In response to the coronavirus outbreak, the mayors of New York City and Los Angeles have ordered all movie theaters closed.

Cinemark: The theater chain has shut down all of its locations indefinitely.

Australia: On Monday, 3/23, the federal government of Australia ordered all movie theaters to close nationwide.

Minions: The Rise of Gru: DreamWorks Animation’s highly-anticipated animated prequel was originally set to release on July 3 but has not been pulled from the release schedule.

SXSW: On March 6, the 2020 South by Southwest Festival was officially cancelled after the city of Austin, Texas, declared a state of disaster. Prior to the cancellation, a slew of major companies including Facebook, Twitter, Apple, Netflix, Amazon, WarnerMedia and TikTok had pulled out of SXSW.

Coachella: On March 10, it was reported that Coachella, one of America’s largest annual music festivals, would be postponed. Originally scheduled for April 10-12 and April 17-19, the festival will now take place October 9-11 and October 16-18.

Electronics Entertainment Expo: E3, the biggest yearly video game trade show, has been cancelled. The event was scheduled for June 9 to 11. The organization has stressed that the 2021 expo will remain on the schedule.

North American Sports: The NBA and NHL have suspended games indefinitely due to health concerns while the MLB has postponed spring training games and the start of the season. The NCAA March Madness tournament has also been cancelled. Prominent NBA players such as the Utah Jazz’s Rudy Gobert and Donavan Mitchell have tested positive for the coronavirus.

Rock and Roll Hall of Fame: On March 12, HBO announced that the 2020 Rock & Roll Hall of Fame Induction Ceremony would be postponed to a future date. The Ceremony was scheduled to be broadcast live for the first time on HBO on May 2nd at 8 p.m. ET at Cleveland’s Public Hall.

Disney Theme Parks: On January 25, Disney closed its Shanghai Disneyland park and, one day later, its Hong Kong Disneyland park. Combined, the company is estimated to be losing nearly $300 million per quarter due to their closures. They were soon followed by the closure of Japan’s Disney parks. On March 13, it was announced that Disney World and Disneyland Paris as well as Disney California parks would close. Universal is also temporarily shutting down its theme parks.

Disney+ International Rollout: The launch of Disney+ in France, India, and other key overseas markets has been delayed until at least April 7 due to the coronavirus outbreak. UPDATE 3/24: Disney+ has launched in seven European markets: Germany, United Kingdom, Italy, Spain, Switzerland, Ireland and Austria.

New York City: On March 12, Governor Andrew Cuomo announced that major New York City attractions such as the Metropolitan Museum of Art, New York Public Library and Carnegie hall would close. In an effort to reduce risk, the city is also limiting gatherings of more than 500 people, which includes events such as Broadway theater and concerts.

Network Upfront: Upfront presentations, a time when television networks and distributors join with advertising companies to work on upcoming schedules and sell blocks of ad time, have largely been cancelled. CBS, Fox, and The CW are among the major networks to scrap upfronts as a result of the coronavirus.

Fathom Events: In response to the viral outbreak, Fathom Events has cancelled and/or delayed its major upcoming events amid theater closures.

2020 Bonaroo Music and Arts Festival: The annual festival, originally scheduled for June 11-14, has now been delayed until the weekend of September 24-27, Variety reports.

Lord of the Rings: According to The Hollywood Reporter, production on Amazon’s $1 billion Lord of the Rings TV series has been suspended in new Zealand for at least two weeks. Staff has reportedly been told that “there are no clear answers to when we will resume.”

The Witcher: Henry Cavill’s blockbuster Netflix series The Witcher has halted production on its second season for at least two weeks due to the coronavirus spread. It is now the first major UK TV drama to be put on hiatus, per Deadline.

Disney: The Mouse has suspended production on all live-action films in development, per THR.

Live TV: Both Jeopardy and Wheel of Fortune are taping without a live studio audience due to coronavirus concerns. The same practice is being adopted by late night TV as NBC’s The Tonight Show and Late Night With Seth Meyers, CBS’ Late Show With Stephen Colbert, Comedy Central’s Daily Show and TBS’ Full Frontal with Samantha Bee will all begin filming without live studio audiences starting on March 16.

Elsewhere across the industry, production has been either delayed or suspended indefinitely on a number of series including CBS’ The Amazing Race and Survivor, Apple’s The Morning Show and Little America, The CW’s Riverdale, Netflix’s Russian Doll and more.

Mission: Impossible 7: In late February, Paramount Pictures halted a three-week shoot in Venice, Italy, “out of an abundance of caution for the safety and well-being of our cast and crew.”

Warner Bros: WB has suspended production on Fantastic Beasts 3, King Richard, and The Batman, per Deadline. It is unclear when the former two will resume production. The Batman is serving a two-week production hiatus, though that could be extended if the situation worsens.

BBC: BBC dramas Peaky Blinders and Line of Duty have both postponed production amid the ongoing pandemic.

A BBC spokeswoman said: “In light of the spread of Covid-19, after much consideration, the producers Caryn Mandabach Productions and Tiger Aspect Productions of Peaky Blinders S6 have postponed filming, and World Productions on Line of Duty S6 have suspended filming, both in consultation with and supported by the BBC.

“We will continue to review all productions on a case-by-case basis and will continue to follow the latest news and advice from the Foreign Office, World Health Organization and Public Health England.”
India: India has shut down all film and TV production from March 19-31 in an attempt to slow the spread of the coronavirus. The move was instituted by Producers Guild of India and India’s Director’s Guild.
The Walking Dead: World Beyond: AMC has postponed the premiere of The Walking Dead: World Beyond, a spinoff of its flagship series The Walking Dead. It was originally set to premiere on April 12 and a new debut date has not yet been announced.

Tom Hanks and Rita Wilson: While filming Baz Luhrmann’s upcoming Elvis Presley biopic in Australia, Tom Hanks revealed he and his wife Rita Wilson had contracted the coronavirus. UPDATE: Hanks and Wilson have returned to the United States and are recovering from COVID-19. 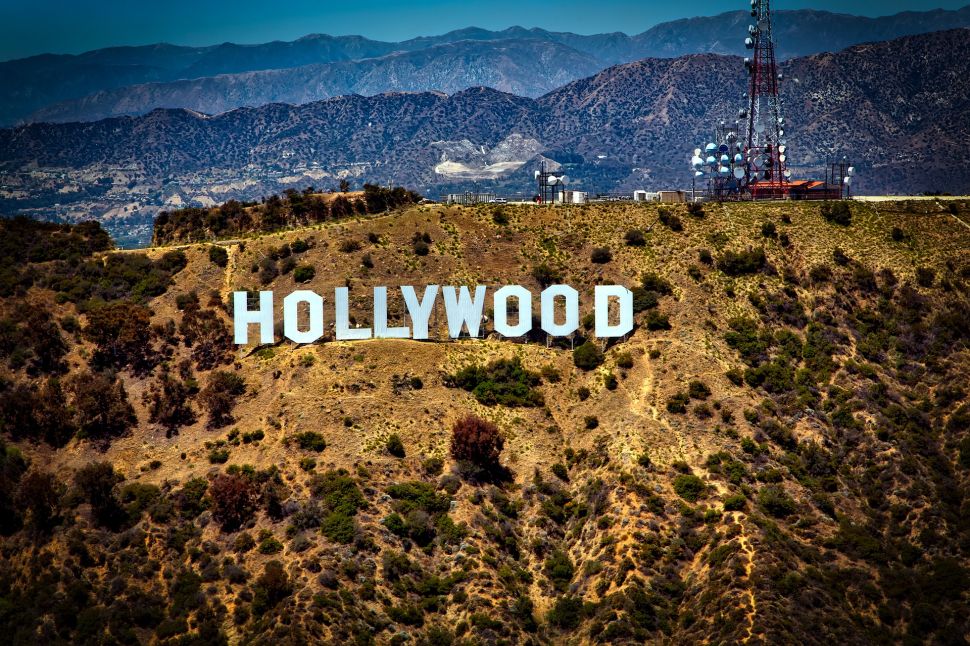