After working at multiple fine art communication agencies over the years, I’ve learned a thing or two on securing coverage for a client. While the tricks of the trade may vary agency to agency, one underlying constant is the seasonal desperation for securing art fair press. Over 180 galleries are exhibiting at the Armory Show’s 2020 edition, and with that comes a heap of a hundred or so publicists frantically vying for those top media placements and Instagram likes. And since The New York Times only has a limited amount of real estate devoted to their fair feature and Jerry Saltz likely won’t Instagram your booth unless it features a female body part, publicists and galleries will go to great lengths to try and catch an editor and influencer’s attention.

In a certain instance, according to ARTnews, at the 2019 edition of ABHK an unnamed publicist was so frenzied for sales coverage they scheduled a mass email squawking the news that David Kordansky Gallery had made some pretty stellar dealings—all of which would have made total sense except for the fact that the fair hadn’t even opened its’ doors to VIPs yet. One can only imagine how quickly that agency office turned from PR to the ER.

Not every gallery can rely on duct-taping a piece of produce to the wall and not every gallery can get away with it. There’s a science to capturing the eyes of the press and image-thirsty influencers. While sales will always reign supreme at a traditionally market-driven attraction, the added pressure of awareness has skyrocketed as quickly as iPhone cameras have made headway. While there are some booths that are met with tastelessness and excess, there are also those that mingle together the perfect union of graceful buzz and thoughtfully considered visuals.

One booth presenting a stunning blend of work and aesthetics this year is Kasmin Gallery (Booth 700). Situated towards the entrance of Pier 94, it feels as if you’re walking into the living room of an ultra rich trust fund friend who has just learned how to perfectly mix their recently collected works with the art their dead grandmother left them in her will.

Los Angeles-based gallery GAVLAK (Booth 906) might’ve struck gold, literally, with their gold colored Maynard Monrow bronze sculpture that reads “WHATS HAPPENING AFTER THE APOCALYPSE.” As coronavirus chatter was hard to avoid, the sculpture was ultra-timely given most people avoided handshakes and opted for an awkward elbow clink or a foots-distance air kiss. Being situated next to a beautiful blue poured mirror and glass work by Rob Wynne also helped the gallery’s case. Baik + Khneysser (Booth P27) details pieces by Mella Jaarsma where nipples become faucets, something that surely would make it past Instagram’s nifty nipple ban. And, in typical fashion, Jeffrey Deitch (Booth 819) pulled through with a visually stunning display of paintings and sculptures by in demand artist Austin Lee. While the Deitch gallery folk are never too gregarious, we were able to learn that the works were specifically made for the fair’s booth.

In the age of narcissism, mirrored works are naturally scattered throughout the fair, which is fitting given a seasoned art-goers favorite thing, second to sales, is their own reflection. Victoria Miro (Booth 600) presented a deadly-looking mirrored sculptural piece by Conrad Shawcross while Italian gallery Lia Rumma (Booth 605) showed an opulent mirror work by Marzia Migliora, Quis contra nos #2, featuring vinyl writing. New York-based R & Company (Booth 518) got creative with their selfie opportunities by presenting a reflective hand-blown glass sculpture by artist Jeff Zimmerman. Hanging on the wall, each globby figure is quirky in shape and morphs a selfie just enough to make each picture-taker feel unique.

The Armory Art Fair is merely a drop in the contaminated that is the art fair scene. While it’s physical footprint is large, it too is hopelessly looking into ways to stay relevant—which was quite hard this year given Pace Gallery was a no-show so gawkers didn’t get to enjoy an elongated Leo Villareal or floating Studio Drift sculpture. In a world where art chatter regarding fairs can seem quite pessimistic, the Armory Show still proves that there’s much to see, much to cover, and much to Instagram. Come Monday morning, once the fair is dead and gone, dealers and publicists alike will be able to wrap up their wounds and prepare for their next round of pitching, selling and hand sanitizing. 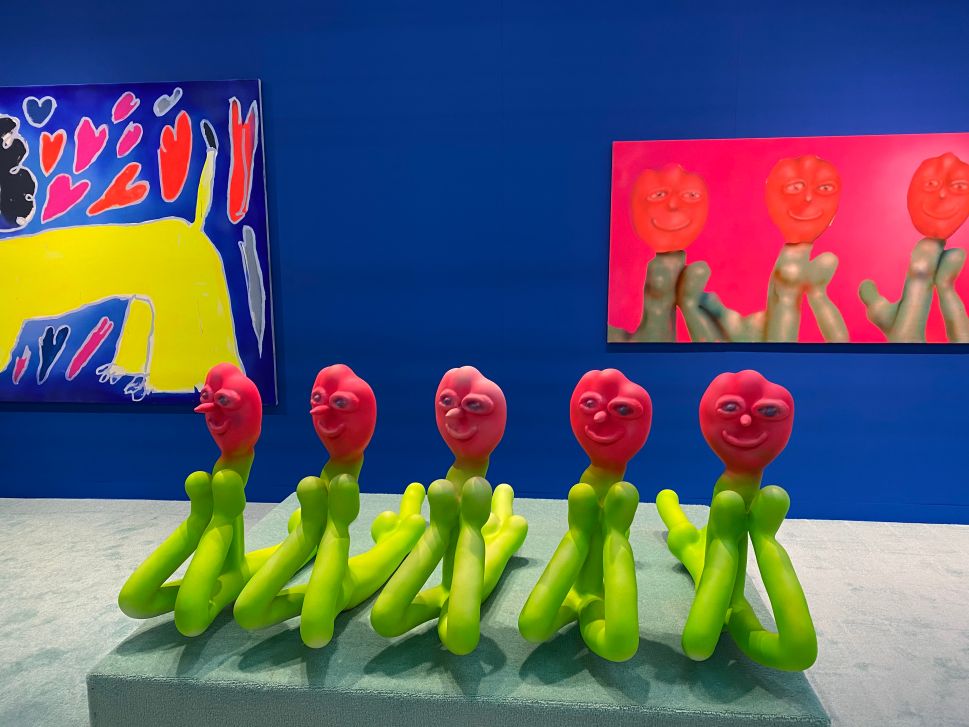