Perhaps storing thousands of objects for collectors, galleries, corporations and museums has made me somewhat anti-materialistic, but there are a few items I’ve been rather attached to. There’s a wedding gift from a family friend, an elegant little art nouveau green-gold glass vase and my former Mini Cooper convertible. The latter is toast. Someone rear ended me and the insurance company totaled it as the parts were worth more than the Blue Book value. Part of what kept that vehicle in great condition was my vigilance in defensive driving. Sadly, there are many hazards that can trash the rims of a car that low to the ground. There are pot holes in New York City that could swallow my Mini. And driving skills aside, the car cost its fair share to maintain. But like any luxury, if you want the fast, shiny object of desire, you have to pay the price.

And yet in my experience working with collectors, apparently some people think that price is negotiable, or need not apply to them. When it comes to buying art, they shimmy out of paying associated costs through a little thing the industry calls “tax boxes.” No, those boxes aren’t the ones you tick on your tax return. They are real boxes, sent all over the country and even the world, all to avoid paying what’s due to local governments.

SEE ALSO: How the Hardest Art to Transport Travels Around the World

Back when the practice was more open (and when clients didn’t know we were heartily against the practice) we’d receive calls often asking us to transport newly purchased works of art from galleries or auction houses in New York, drive them to their second homes in places like Aspen or Sun Valley, have someone sign the bill of lading, and without taking it off the truck, return it to their Manhattan apartments. Why? As people brazenly told us, it was an easy way to avoid paying the slightly higher sales tax in New York State.

We clearly knew this was not acceptable, no matter how tempting the added revenue, but I suppose there was always someone else who would chance it. If I look back at old records, I might find occasions where we shipped art work out of state, and then returned it months later, or the following year. That’s probably a less obvious way to dodge paying taxes. Even so, if the tax return is done properly, use tax, or consumption tax, should be paid at whatever the rate was at the final destination. A difference of perhaps 2 to 3 percent on several millions of dollars is still a sizable number.

Then there those who wish to make use of NOMAD states: New Hampshire, Oregon, Montana, Alaska and Delaware. Those states have no sales tax, therefore, no use or consumption tax. It’s legal to move recently purchased works to a home or a warehouse in these states, but once they leave there, the tax should be due wherever the ultimate destination is. Problem is, this is hard to track and relies on the buyer self-reporting on their tax returns when they eventually move the goods to a state where there would be a taxable event. To summarize, some people would send the art work, soft-packed or crated, hundreds or thousands of miles, risking damage (hey, the fine art handling industry is excellent at what they do, but evidence shows that most claims are a result of art in transit), just so they can avoid paying tax. Someone plunked down a cold million on a painting, and didn’t want to pay the extra $88,750 to make the transaction legit. If I had a million to burn, knowing I am doing my civic duty, and not wanting to go to jail, I’m paying the tax.

I received a call from someone at the Wall Street Journal while I was in Basel in 2005. He asked me if we did trucking for the CEO of TYCO. We had some work on the books, but we didn’t handle this account. I knew who did, but art handlers are for the most part a very collegial group. I wish no ill on the competition. Unfortunately, my colleague was dragged through it a bit, and the collector was convicted of tax evasion, serving some real time.

In the case of TYCO’s CEO, and many other artful tax dodges, the real items were moved. But on another level of tax avoidance, sometimes what’s being shipped around the country is, in fact, just an empty box. Sometimes our handlers collect pre-packed items that have a remarkable lack of heft to them. If we are not hired to inspect, re-pack or condition something that was “packed by shipper,” and if the destination is domestic (a certain amount of inspection is required, especially these days, by the new TSA regulations, for international shipments), it’s unlikely we will open a package. About 25 years ago, out of curiosity, we took box cutter to tape and lo and behold, the box was empty. This specific shipment was booked through a third party. The broker that hired us explained, “it’s a tax box.”  I had never heard this term before. It’s amazing to me now, to think how cavalier people were about it. Yet it’s still happening, and it’s quite toxic how so many of us can become complicit to fraud in the service of wealth.

For fear of being scooped by another company, we could make decisions we know are wrong. But as I mentioned at the beginning of all of this, it’s not so much about breaking the law, as it is about breaking the spirit of our people. The money collected on fine art is used to provide residents with an education that can make them more productive citizens, raising our overall group average and making us greater than our sum total. It’s used for many other civic projects, like fixing the goddamn roads so we don’t have to mince around for fear of so many automobile repair bills.

Now you know what a tax box is. And hopefully, you know what it means to skip out on paying our fair share when we accumulate more high ticket baubles and trophies. We’ve had it really good in this country. It’s still effectively a confederacy, where the state tax is separate from the federal tax. When you import art work from overseas, the first checkpoint is Customs and Border Protection. Artwork is duty free, so the only government fee you pay for inbound airfreight is capped at around $500. The big tax expense is at the state level, and the system in place is clunky. The only time the state you live in knows about your import is when they request data from U.S. Customs. In this country, your customs broker is not responsible for collecting that state tax. That’s on the consumer; it’s sort of an honor bar. And all this could come to a halt, at any moment. In most countries, the customs agent is on the hook for a Value Added Tax or whatever the specific nomenclature in a particular country might be. That means, the full tax is collected before the consumer takes possession of their purchase. It’s a very complex process with a lot of moving parts. See, we have it really easy here, but it has also made it easy to cheat. That’s all starting to change. There are many states that have become hyper vigilant.

So, whether you are sending an empty box, or one with a banana duct-taped to the interior, think about all those families, hard pressed to get a variance to send their kids to the next district that has a slightly better school, or those cute little sports cars that fall into the chasm of our failing infrastructure. Seriously. Around the same time as the TYCO scandal happened, a German art shipper came to visit the U.S. for the first time during the Armory Show. He took a few days to tour Manhattan and he came to me and said, “your city reminds me of the old DDR (Deutsche Demokratische Republik, or East Germany),” he was formerly from Leipzig and grew up during the Cold War. I looked at him incredulously. “Your streets are in ruin and your buildings are falling apart.” 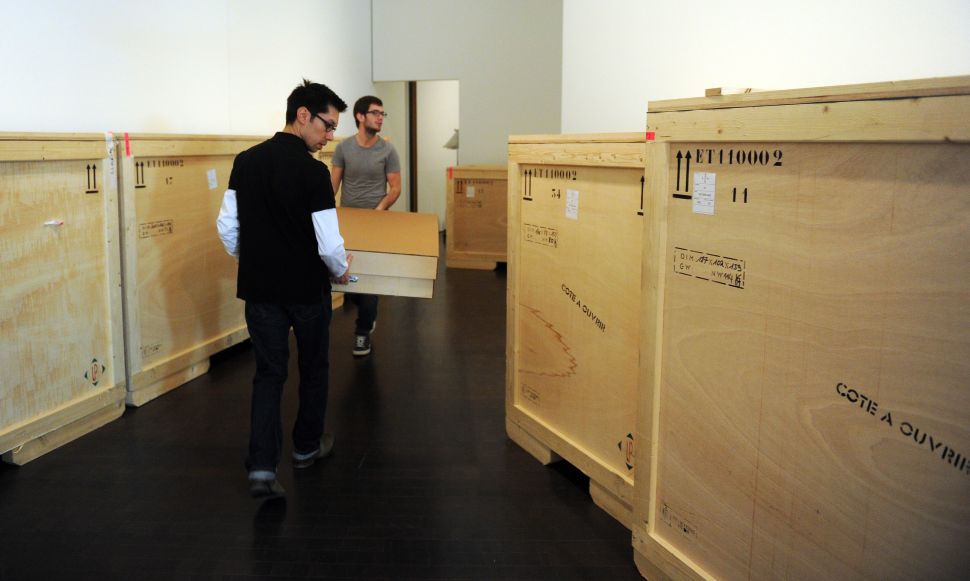