Jack Black can turn the most mundane of routines into a full-fledged physical comedic showdown. Take his star-making supporting role in 2002’s Orange County, for example. One scene, he’s behind the wheel of a car, but he’s not just driving. His eyes are darting around like a madman, his hands barely touch the wheel, and he’s talking a mile a minute. It’s ridiculous and it’s funny and what should be a ho-hum transitional scene is suddenly spun into pure gold.

We were once again reminded of Black’s immense gifts, including his nimble moves for a big guy, as the star joined TikTok Monday night and treated fans to a glorious and much-needed reprieve from the real world. Dance, you majestic and beautiful swan, dance!

More importantly, Black’s foray into social media reminded us that this guy has a killer resume of entertaining flicks that are perfectly suited to assuage your boredom as this self-isolation lockdown continues. So here are a few key Black films to pass the time and where to stream them. Sadly, not all of his greatest hits are available online without rental or purchase.

An underrated classic that was overlooked upon release, Saving Silverman has slowly but surely attracted its rightful fanbase over the ensuing years. No one is here to claim that this movie is the epitome of high-brow social satire—at one point, someone’s nipple is set on fire. Saving Silverman is a farce and that’s exactly why it’s lovable. Hijinx abound when Wayne (Steve Zahn) and J.D. (Black) attempt to stop their best friend Darren (Jason Biggs) from marrying the wrong woman. Black, in particular, is quite hilarious in a more calm and subdued character than we normally associate him with. Come for Black’s comedy but stay for the Neil Diamond concert.

Saving Silverman is on Crackle.

In Orange County, Jack Black jumps into a pool, spills (someone else’s) urine all over the couch, sets a building on fire, and runs away from the authorities in his underwear. Need I really say more?

School of Rock is very close to a perfect movie. It’s irreverent without ever being crass and it’s tender without ever crossing into sap. At the center is Black, who gives such a committed, happy-to-be-here, and energetic performance that you can’t help but root for his sad sack protagonist. Directed by Richard Linklater and written by Mike White (who pens a very clever script), School of Rock was the perfect match for Black’s charismatic musical chops.

School of Rock is on Showtime Anytime.

Not only was Kung Fu Panda an appropriately humorous and emotional animated family film, but it was also a pretty cutting-edge visual treat. DreamWorks Animation was rightfully praised for its eclectic aesthetic here which still holds up 12 years later. Sadly, Kung Fu Panda lost the Best Animated Feature Oscar to Pixar’s Wall-E, but in typical Black fashion,he turned it into a positive. “Each year, I do one DreamWorks project, then I take all the money to the Oscars and bet it on Pixar,” he said at the ceremony that year.

Confession time: I’ve never actually seen Goosebumps! But it earned a good enough 78 percent on Rotten Tomatoes and made a solid $158 million at the box office. That suggests a baseline popularity that is enough to entertain the kids while you go have a much-deserved cigarette in the back yard.

Goosebumps is on FX. 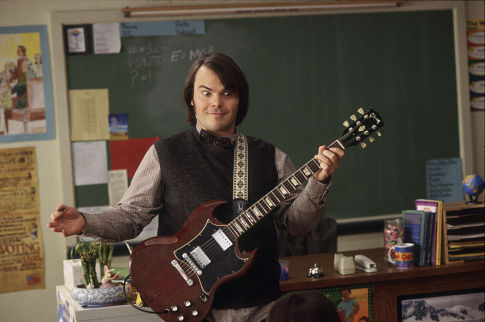